I saw the poster for JACKIE & RYAN and I expected this to be the kind of feature you'd see made for TV's Hallmark Channel.  That is, until Katherine Heigl as Jackie drops an F-bomb during a very intense legal scene.  And you cannot blame her character for dropping it one bit.  Heigl has not had the most consistent film career and, as of yet, she has been as popular on the big screen as she was on ABC TV's Grey's Anatomy.  I loved her in Knocked Up opposite Seth Rogen.  That was a fun movie.  But, as a film reviewer, I did not have fun enduring some of her films that followed.  I sat in movie theaters watching 27 Dresses and The Ugly Truth.  I found myself feeling the arms of my cineplex movie theater seat, praying to Heaven that there was a fast forward button.  I liked her recent NBC political drama/action series, State of Affairs, co-starring Alfre Woodard as the President of the United States.  But the show was canceled during its first season.  Jackie & Ryan is a small indie film.  It takes place mostly in a rural, peaceful Utah.  It was written and directed by Ami Canaan Mann.  She gives us a new Katherine Heigl movie that I liked.  Ben Barnes hit just the right note, musically and dramatically, as Ryan. 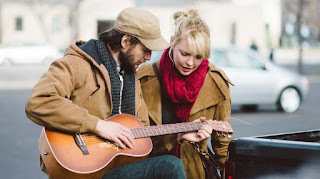 He's a drifter musician.  He's a good musician who could be successful and be a guest on shows like National Public Radio's Fresh Air.  He has a country sound and style that NPR would love.  But Ryan chooses to hop trains and drift from one town to the next.  You like Ryan.  He's the kind of man who charges in to help someone in need.  When he plays the guitar, you almost think you're in for a love story like that sweet, imaginative musical from 2006, Once.  It's not musical love story but this film has that same sort of economy and pacing.  Ryan doesn't give much thought to his future. Jackie once had a hit record but she also had a marriage that went sour.  She took her child, left New York City and went back home to Utah.  Financially, things have been better for her.  But she doesn't give up.  A small accident brings Jackie and Ryan together.  They connect because they understand frustration and loss.  She's grateful he came to her aid when she was down.

I was positive that Ben Barnes was from America's Heartland.  I looked up the actor's information.  He's British.  From London.  He pulled off that role very well. 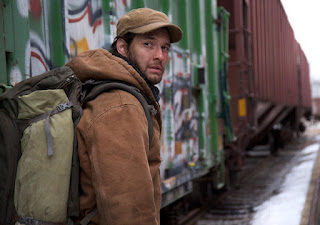 I really connected to Heigl's character.  She's the working class single mom, once a performer in New York City.  Today, like many of us, she lost her insurance and needs a job.  I've been doggedly pursuing work in order to climb back up over the poverty line.  Because I've worked on TV in the past, there are some people -- even today as I job hunt -- who assume that I am still working on television and make thousands of dollars a week.  They think my previous gigs were glamorous.  Their faces always crack when I tell them that one ABC network TV job I had paid only $500 a week -- and that was the same exact amount I made when I started work as a weekly regular with Whoopi Goldberg on her national weekday morning radio show in 2006.

Jackie goes after a music teacher job only to get to the school and discover they really wanted an intern.    That means they want someone to work for free.  The chatty, plump woman doing the hiring recognizes Jackie.  She's giddy to know all about show biz limos and what they were like.  It's an honest scene.  Trust me, I've been where Heigl is in that scene when I've applied for "real people" jobs.

Jackie sings one night in town.  She sings for "good, smart, hard-working people" and about the "choices you make when you feel you don't have a lot to choose from."

Jackie and Ryan connect gradually, blend into each other's lives for a short time and things change.  Jackie & Ryan is a simple, tender-hearted film carried by a satisfying script and nice chemistry between the two leads. It opens in limited release on July 3rd and will also be available on Video On Demand. 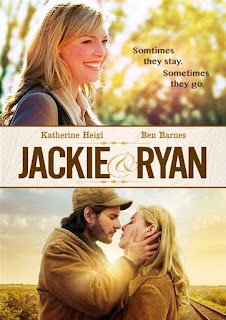