Feelings Are INSIDE OUT

Colorful.  Original.  Imaginative.  Touching.  Those are my words for Disney Pixar's INSIDE OUT.  I did not expect to get a few tears in my eyes during this animated feature, but I did.  We go into the mind of a young girl.  Riley is 11.  The family moved from her beloved Minnesota to San Francisco.  She's a sweet kid and the move brings up several different feelings.  We see the feelings in the control room of her mind. 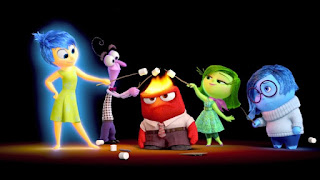 The move doesn't go as smoothly as her dear, disappointed Dad and Mom hoped it would.  The family belongings didn't arrive as scheduled from Minnesota. 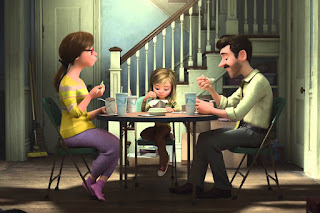 The little voices in her head watch her new life unfold.  They see the adults in Riley's life and know exactly what her feelings are even if the adults don't.  We're also taken into the minds of Riley's parents to see the little voices that give them personality.  I'll just say that if Riley's mom was a television network, she'd be Lifetime TV and Riley's dad would be ESPN.  He looks a bit like the "Soup Nazi" in that popular Seinfeld sitcom episode. 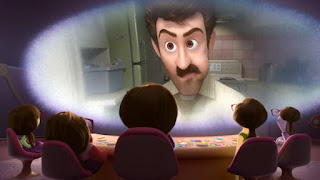 What Riley -- and we -- will learn is that feelings are important.  They're significant.  In fact, they lean on each just like passengers in the same seat on a rollercoaster ride as it makes a wild turn.  This is especially true of Joy and Sadness.  Sadness is a little blue. 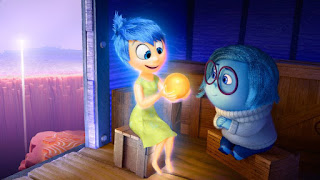 Joy, with her pixie haircut, reminded me of Tinkerbelle from Disney's animated classic, Peter Pan. 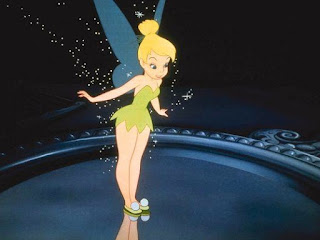 As Riley's inner voices touch on core memories and venture through other parts of her mind, I felt it was a brilliant move to make the character 11.  When you're 40, there will be a life-changing event that makes a big impact on your adult life.  It may be marriage or divorce, relocating for a new job or the loss of a longtime job you had.  It could be a new true love.  Something memorable.  That same thing can apply when you're 11 and teetering on the brink of puberty.  Emotionally, adults seem to pass through a Valley of Forgetfulness when they become parents.  They forget what it was like to be an adolescent.  Riley's feelings are complicated and serious to her.  She's moved from a place she loved in the Midwest.  She's the new kid at a new school in a new city.  That's major stress.  She just wants to be liked.  She experiences little heartbreaks and humiliations that her parents don't know about it.  But her inner voices see them.
When I was 11, I was the new kid at a new school.  A Catholic school.  I knew exactly how Riley felt.  I was a chubby, shy bookworm.  One day at recess, three classmates (whose names I still recall) had a mean contest.  The loser of the three would have to touch Robert Rivers, the new kid.  I don't know if they realized I could hear them, but I could.  Linda, a popular girl who never talked to me, walked over and pretended that she needed to ask me something.  As soon as she touched me on the shoulder, her two male buddies started laughing loudly.  She said to me, "Never mind."  I vowed that I'd be popular one day and people would want to shake my head, give me a hug or otherwise touch me.  That's a core memory that I kicked to the back of my mind.  So I thought.  I'm sure it leaned on and intensified my ambition to became a national TV talent.

Fast forward a few decades.  Call it juvenile, but one of my dreams during the 20-something years I lived in New York was to have friends who'd throw me a birthday party.  Nothing extravagant.  I never had big birthday plans even though my friends assumed I would because I've worked on TV.  When they had birthday parties, I showed up with a gift.  I sang "Happy Birthday" along with the other festive guests and watched the friend being celebrated blow out the candles on the birthday cake.  That's what I really wanted.  A cake with candles.  That's a sweet, illuminated symbol that says "You're special to us.  We want you to make a wish and we want it to come true."

In months counting down to my 50th birthday, I casually mentioned to friends that I had no plans for my 50th.  Some of them were tossed really swell parties for their 50th year.  Well, I was certainly available to be taken out and sung to before I blew out the candles on a cake.  One friend who lived a few blocks away called me on my birthday morning and asked if i had any plans.  I didn't.  She wanted to take me to dinner when she returned from a freelance job she had that afternoon in Connecticut.  She was getting a ride with two other folks in Manhattan who booked the same job.

Unfortunately, returning from the job, their car broke down on a Connecticut highway.  She called constantly to tell me they were still waiting for assistance.  It was not her fault and she just wasn't able to get back to Manhattan to take me out.  Around 9:00 that night, I took myself out to a favorite diner down the block.  I told the manager it was my birthday, knowing that he'd probably give me a free dessert.  He did.  While I sat there, eating alone on my 50th birthday, I thought of those three mean kids in junior high and said to myself, "Well, I guess they won after all."  See?  That core memory came back as a comment on a new adult memory that hurt even more.

That's a painful birthday memory.  It stings my heart.  But what do I do with it?  Whenever I have an actor audition for a serious scene, one with heartbreak, I pull that memory out and use it positively.  Instead of letting it make me bitter, I use it to give truth to an audition so I'll get some work.  When the audition is over, I kick it right to back of my mind.

That's what I mean about how feelings lean on each other and how they all serve a purpose if we handle them well.  Is Inside Out an animated masterpiece like Disney's Snow White and the Seven Dwarfs and Pinocchio?  Is it as magical as The Wizard of Oz with young Judy Garland as a wistful Dorothy singing "Over the Rainbow"? This new feature is very fresh and very good but not quite a masterpiece in my book.  There's so much pop psychology that it needed a splash or two more of whimsy for buoyancy.

Still, Inside Out is a winner. Pixar does calculated sentimentality with finesse.  The little voices in my head recommend Inside Out for wonderful family entertainment. 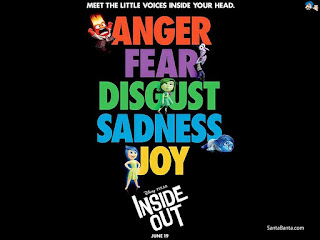