He's 46 years old, a balding insurance salesman with a nice home and a sweet boyfriend.  Yet, he's scoping out younger dudes in the supermarket.  Henry, in a voiceover, describes male erections while we see produce as the suggestive visuals.  It's a pretty snappy open.  This is the premiere of CUCUMBER coming to Logo TV on April 13th. 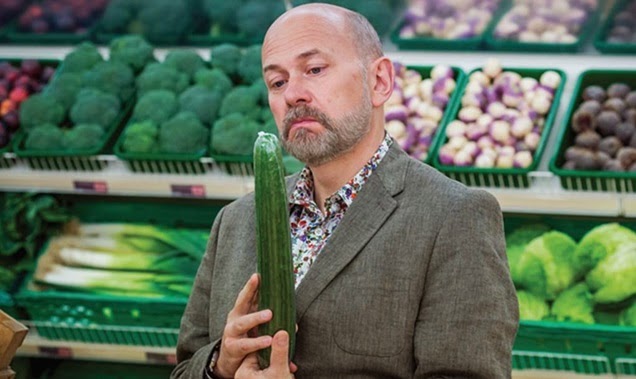 I've had my problems with Logo TV.  It came on the scene as a bold new channel with programming aimed at the gay audience.  Then repeats of mainstream sitcoms about straight characters were added to the line-up with fewer shows about gay culture and news.  I felt the channel should've retitled itself OnTheDownLoGo because it seemed to be pushing its gay identity to the back of the bus.  Cucumber is very much a show about gay characters, mostly men, and it was created by Russell T. Davies.  He was a top man behind Doctor Who and the truly bold British TV series Queer As Folk back in 2000.  As has been done  since the nights of Sanford & Son, American TV executives took a British show and Americanized it in a new version for us here in the States.  That happened with Queer As Folk.  I could see it happening to Cucumber.  But would an American version work?  Not all out Yank remakes of BBC shows have clicked.  The Office worked.  But our versions of BBC's The Robinsons, Peep Show and Coupling vanished within a season.

I saw the first two episodes of Cucumber.  Henry, as you can see, is no hunk.  He's smart, he can be quite charming, but he's also selfish, silly, dishonest and obsessed with having that one earth-shattering sexual hook-up -- hopefully with a 20-something man.  You like him, then you want to slap him for his shallowness.  In other words, he's very human.  A flawed man.  That gives the actor something to play and the actor, Vincent Franklin, plays Henry quite well indeed.  I liked Mr. Franklin when I saw him as the down-to-earth gay wedding planner in Confetti, a guilty pleasure comedy I love.

Henry and Lance, a couple for nine years, meet friends at a bar.  Henry does some rather sweet, middle-aged whining about having to go out for another "gay" get-together. 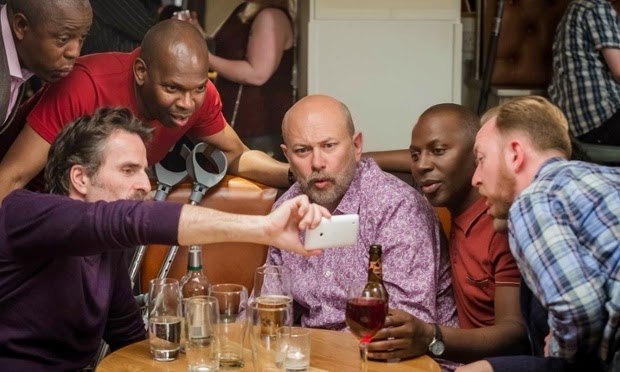 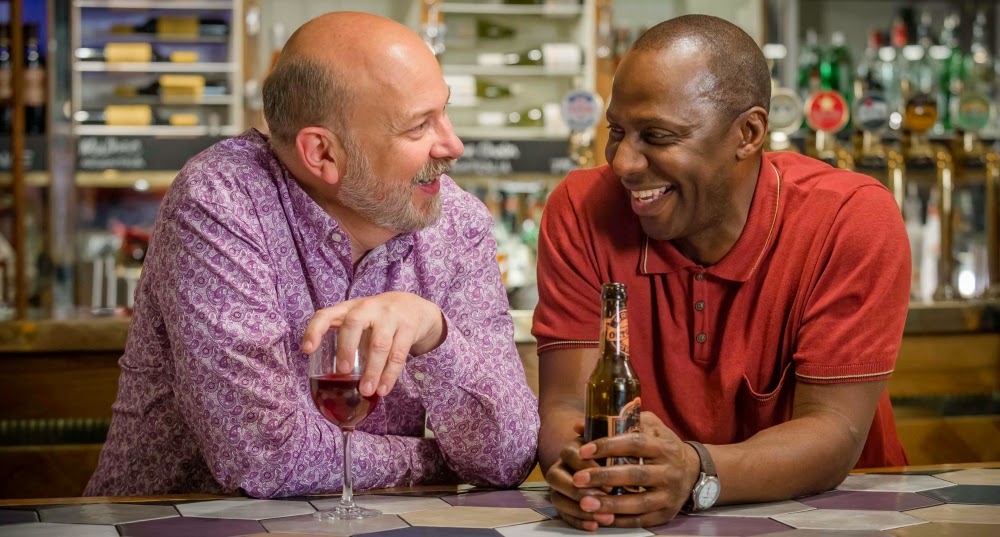 It's obvious that Lance, played with warmth and wit by Cyril Nri, loves Henry.  But Henry, although 46, has yet to grow up.  Later, when he's trying to charm a self-absorbed, 20-something blond twink that he has the hots for, he says "...for once in my life, I'll get lucky."  He's like a figure in one of those Art Nouveau erotica drawings by Aubrey Beardsley -- a little man whose view of blocked by his own outlandish, straight-up erection.  His sexual fantasy blinds him to reality.  Henry doesn't realize that he's already lucky.  That seems to be a reason why his sex life with his boyfriend leaves the boyfriend frustrated.  On top of  the sexual frustration, Henry tops it off with a dollop of romantic humiliation one night when they're out to dinner.

Lance's reaction is to flirt with a handsome diver who is straight...but not narrow.  They're co-workers.  Lance asks him out for a beer after things with Henry get bumpy. 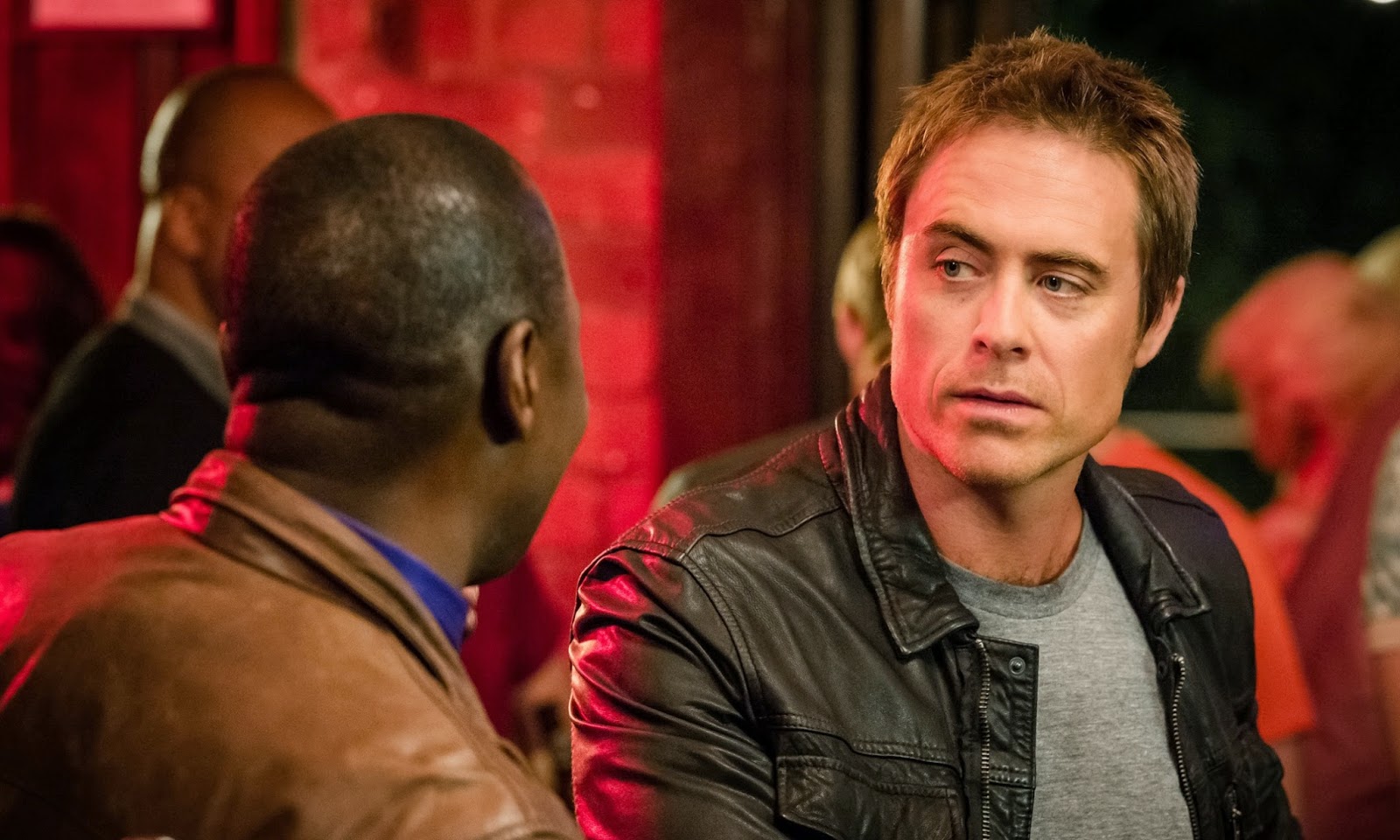 Henry manipulates his way into meeting Freddie, the twink who clearly doesn't care. 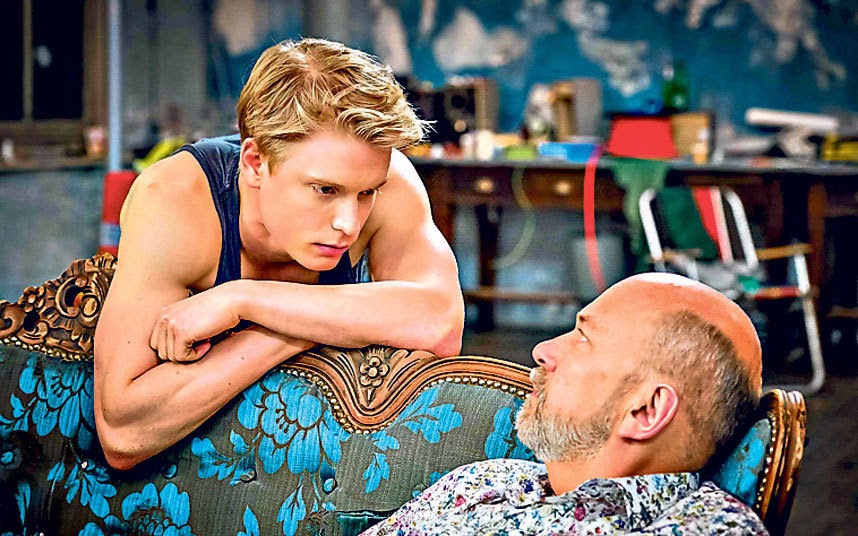 In the first episode, Henry has a fabulously twisted monologue on how non-heterosexual actor Ryan Reynolds is.  Henry says, "...there is nothing Ryan Reynolds loves more than cock."  The cause of Ryan Reynolds' gayness?  His narcissistic view of his own genitalia in the mirror.  One of Henry and Lance's buddies frets because his "spunk" now comes out yellow instead of white.  One says "I miss the 90s."  Another buddy, a handsome and spirited guy with some wisdom of age, now has a physical disability because years of hardcore drinking did a number on his legs.  He's now got titanium hips.  He says "Three decades of vodka have turned my bones into dust."  These friends are racially and physically diverse.  I liked that.  Also in the mix are loving and loopy relatives and interesting characters.  Relatives ask intimate questions about sexual positions and a well-meaning neighbor offers tips for masturbation mood lighting.  Cucumber was both real and surreal.

An older gay man pursuing a young one is nothing new as a storyline for gay characters.  It's been done way too many times.  Freddie could be a rather cardboard, done-before character.  But actor Freddie Fox, seen in last year's under-appreciated Pride, promises to bring a fresh approach to him.  Fox is the son of actor Edward Fox, the man who was so brilliantly chilling as The Jackal in Fred Zinnemann's The Day of the Jackal (1973).

I lost my partner in 1994.  I have not had a second relationship.  That's not by choice.  I got out there and I tried.  I was very romantically interested in a few guys over the years but the feeling was never mutual.  I'd give anything for the thrill of a boring night at home with someone special.  Just the two of us on a couch having some Chinese food on a Saturday night and watching a movie.  That, to me, would be absolute bliss.  That's what Henry has with Lance.  The insurance man is lucky and he doesn't realize it. 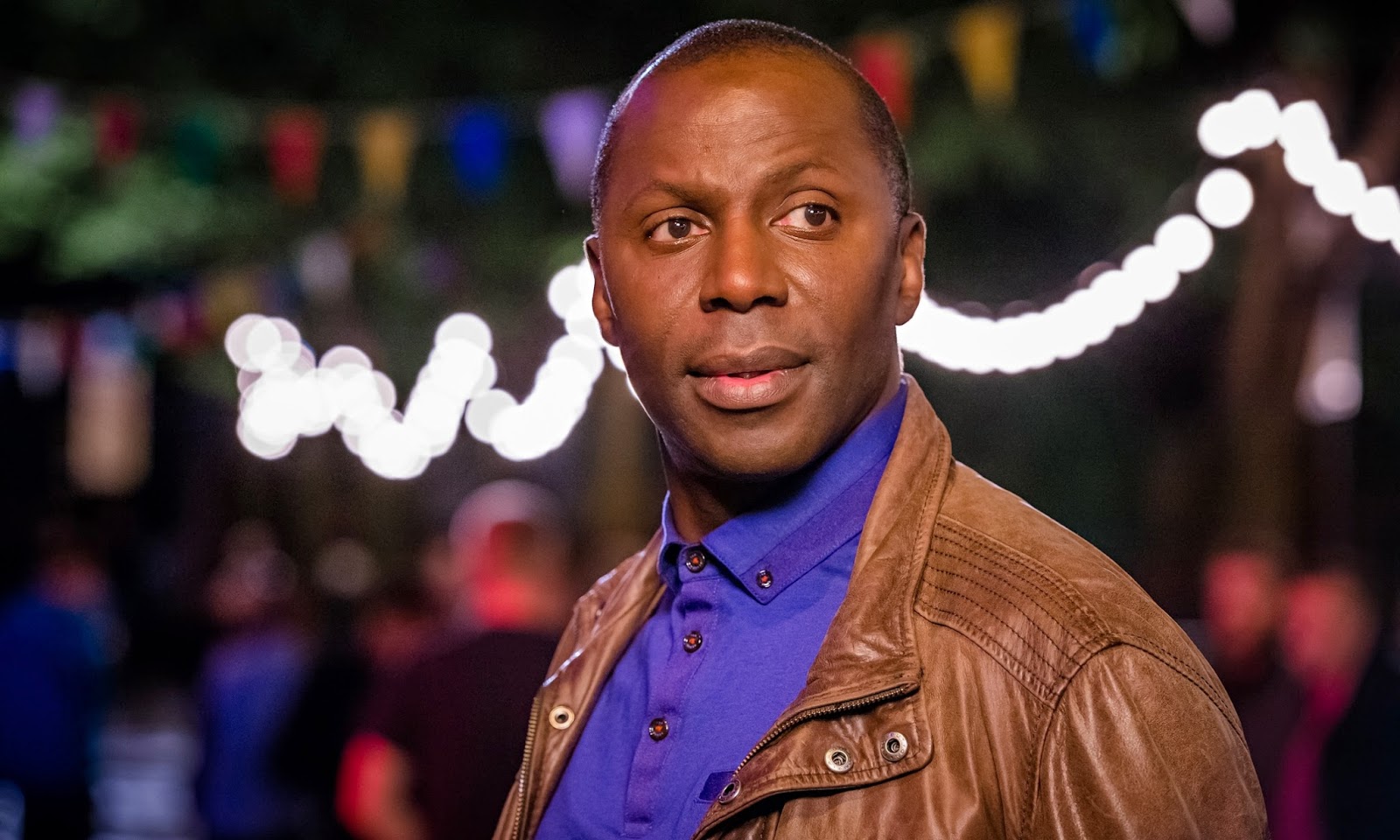 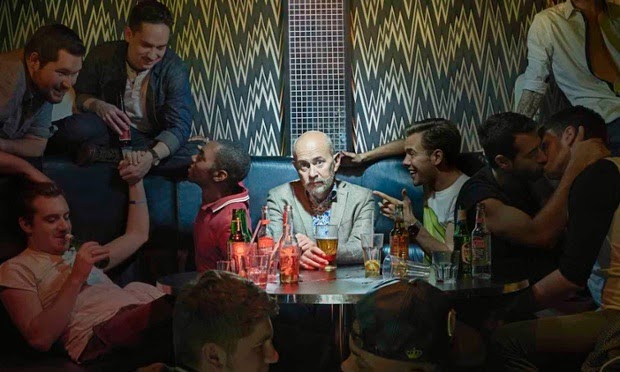 He's still obsessed with finding that one cucumber-sized johnson on a hot young man.

Will he come to his senses or break his own heart?  Acquiring this British show for American viewing gives Logo TV a vivid dose of its original identity back.  I didn't like everything that Henry did.  In fact, I thought he was an absolute shit the way he treated Lance one night in particular.  However, it's good to see the flawed, middle-aged, ordinary man take center focus in a gay story.  Henry and Lance are not a "mainstream" gay couple like Cameron and Mitch on the sitcom Modern Family.  Henry has done well professionally, he doesn't fit the marketplace definition of handsome, he's middle-aged, he still has sexual desires and he can make a mess of things.  Just like Viola Davis' character on How To Get Away With Murder.

If you're up for some giggles, rent Confetti.  Vincent Franklin is wonderful as Archie the wedding planner.  The 2006 mockumentary follows British couples competing for a top prize from a posh bridal magazine.  Couples battle it out in the "Most Original Wedding of the Year" contest.  If you win, the magazine pays for your  wedding ceremony.  It's like Best in Show with bridal gowns instead of dogs.  The cast includes veterans of BBC sitcoms such as Sherlock's Martin Freeman (The Robinsons and The Office with Ricky Gervais) and Robert Webb (Peep Show).  Be prepared for full frontal nudity as one pair of competitors is a nudist couple that refuses to put on clothes for the magazine's stuffy executives.  That's one couple the wedding planners have on their hands.  Another is a pair of tennis players who want their wedding theme to reflect their favorite sport. 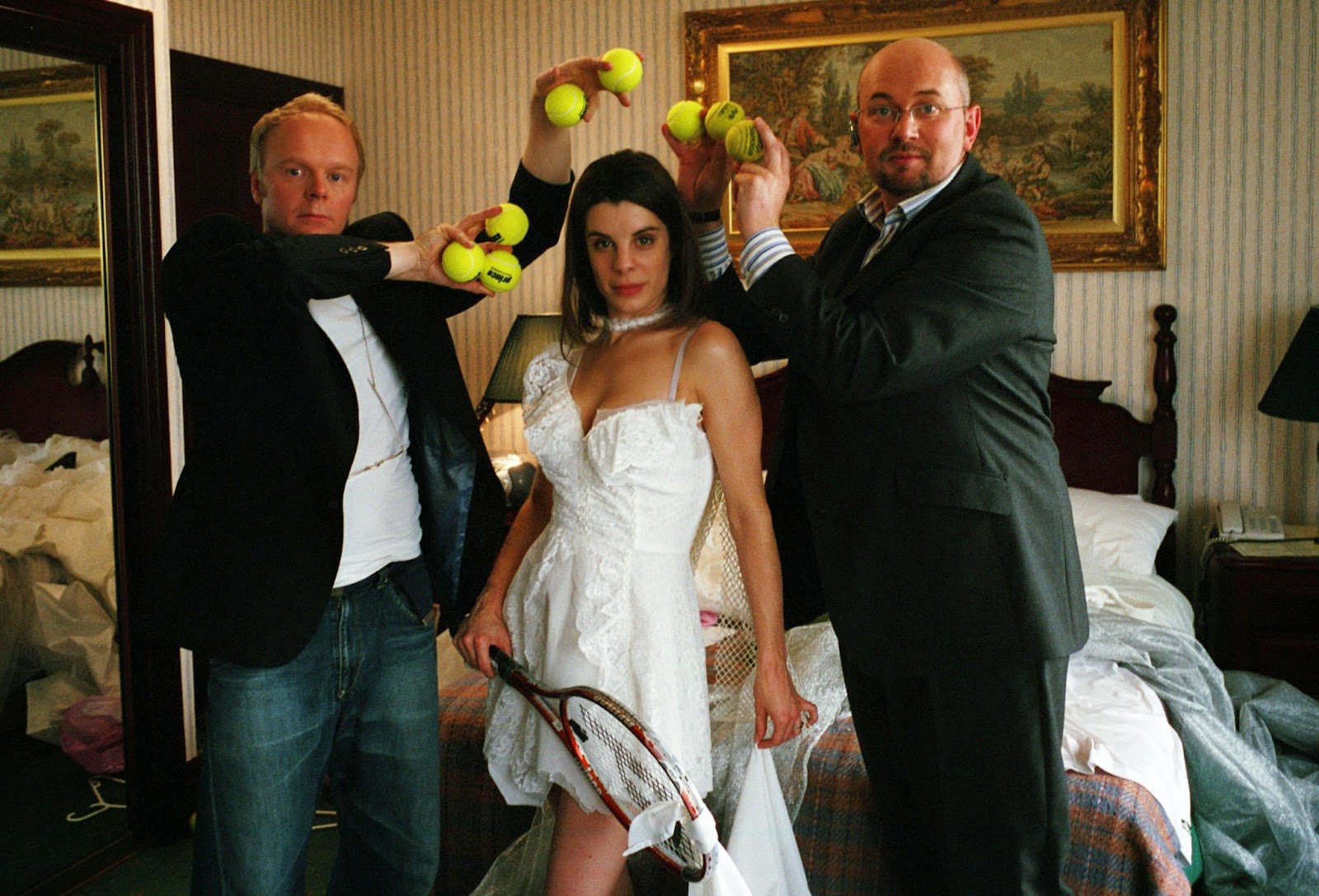 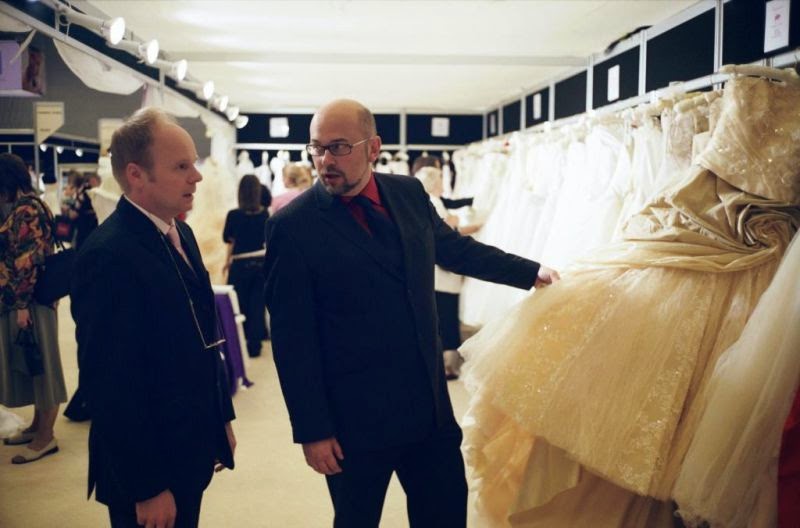 The two wedding planners are also a couple.  As Archie, Vincent Franklin plays a man who has very dear and supportive man in his life.  Archie is lucky.  And he knows it.  I'm interested to see if his Cucumber man finds happiness the way his Confetti man did.