BIRDMAN and THE BAND WAGON

Her Hollywood movie career definitely had legs.  Two long and lovely legs.  Cyd Charisse was a most extraordinary dancer in classic movie musicals. 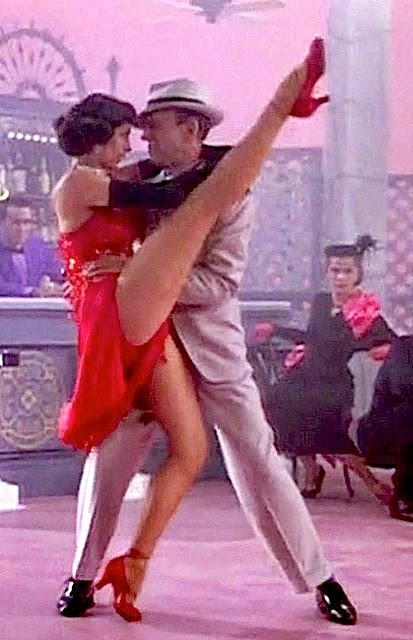 Teamed with film legend Fred Astaire for the first time, she helped make Vincente Minnelli's THE BAND WAGON one of the biggest, brightest gems in the MGM crown of movie musicals.  And MGM was the Tiffany of all major Hollywood studios when it came to producing movie musicals. 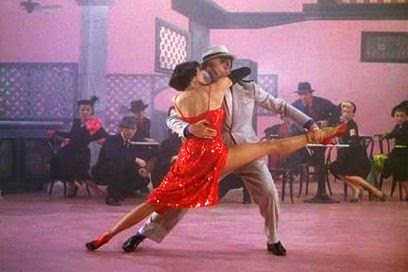 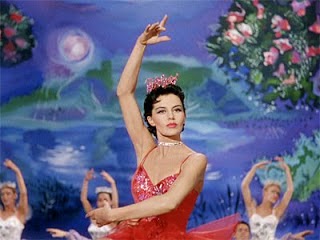 This 1953 musical comedy release is truly a classic.  I've seen it countless times.  The song "That's Entertainment" was written for Minnelli's movie and the movie never fails to entertain me.  When I'm low, it picks me right up.  Cyd Charisse had danced in 1940s musicals for MGM.  She appeared with Astaire, dancing solo, in 1945's all-star Ziegfeld Follies and she was one of The Harvey Girls with Judy Garland in 1946.  Charisse was a featured dancer with Gene Kelly in 1952's Singin' in the Rain.  In The Band Wagon, she graduated to leading lady.  Where she led, we followed.  Who wouldn't?  The way Cyd Charisse simply walked was poetry in motion.  What magnificent carriage. 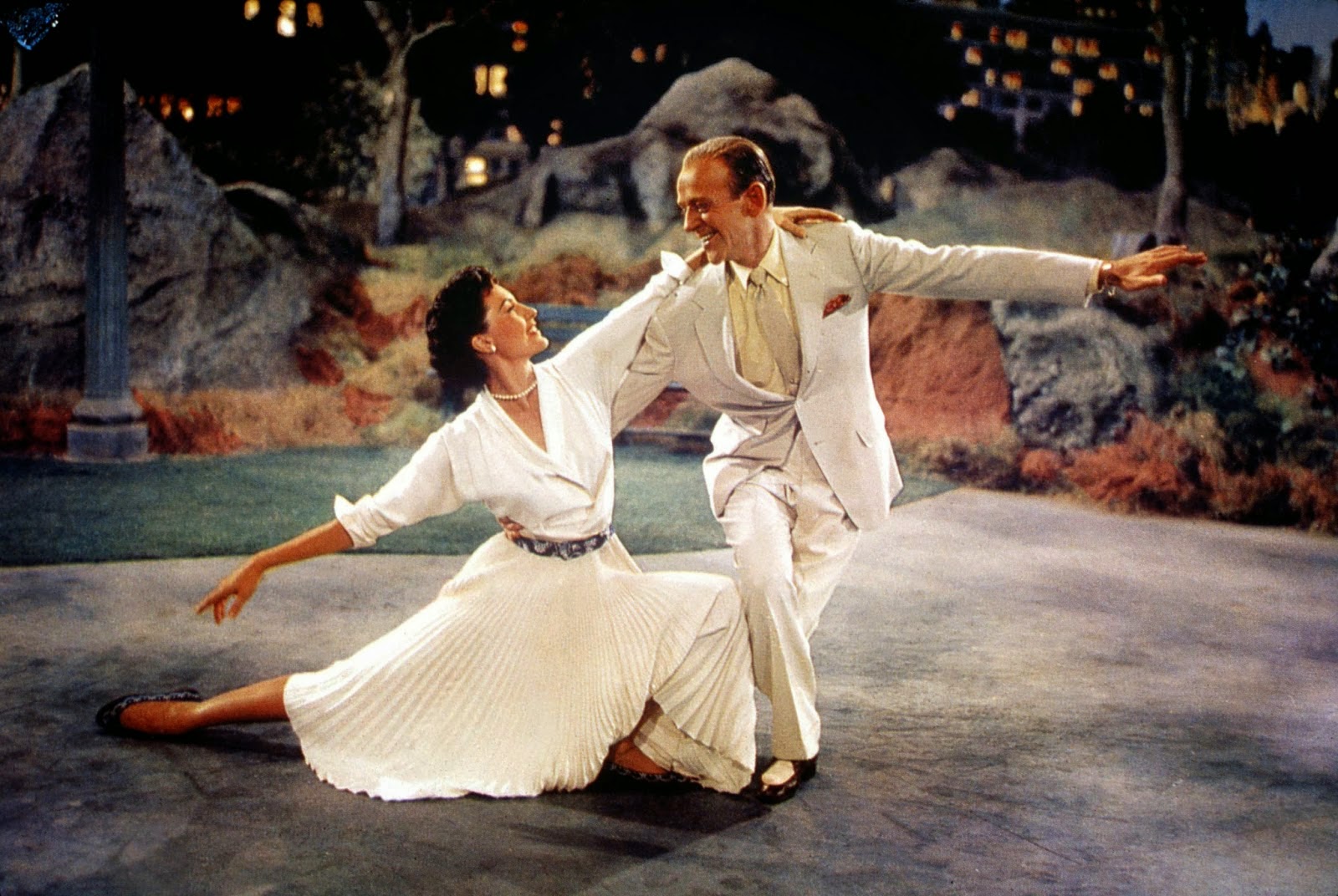 In his autobiography, Steps in Time, Astaire referred to his leading lady in The Band Wagon and 1957's Silk Stockings as "beautiful dynamite."

The Band Wagon and last month's Best Picture Oscar winner, Birdman, have key elements in common.  Like Michael Keaton's character in Birdman, Fred Astaire's Tony Hunter is a middle-aged movie star who had a big hit 20 years ago.  He was the top song and dance man in movie musicals -- like Astaire himself, star of Top Hat (1935), Swing Time (1936), Shall We Dance (1937) and several others.  But Tony hasn't made a movie in a few years and the columnists consider him washed up.  Dapper Tony Hunter leaves Hollywood and heads to New York City where he's to star in a colorful Broadway musical comedy.  He's a bit insecure about his talents, but he needn't be.  This Broadway show will be the chance for Tony to challenge and reinvent himself as an entertainer. 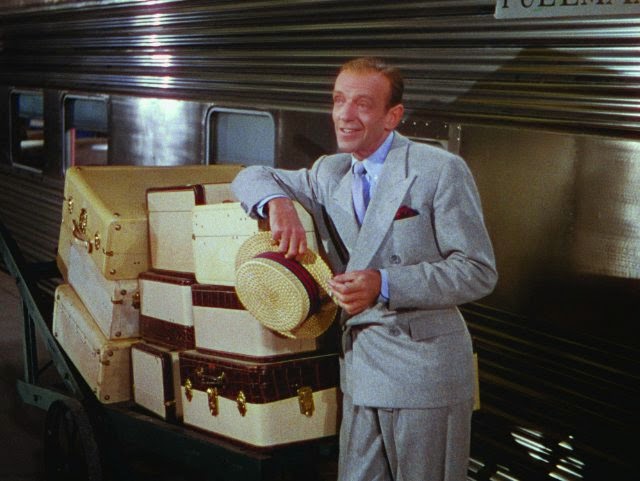 Keaton's Riggan Thomson, is former Hollywood action movie hero.  Riggan was Birdman.  Now the Hollywood actor takes a risk in accident-prone rehearsals for a dramatic Broadway debut.  He could reinvent himself with this play and be relevant again. 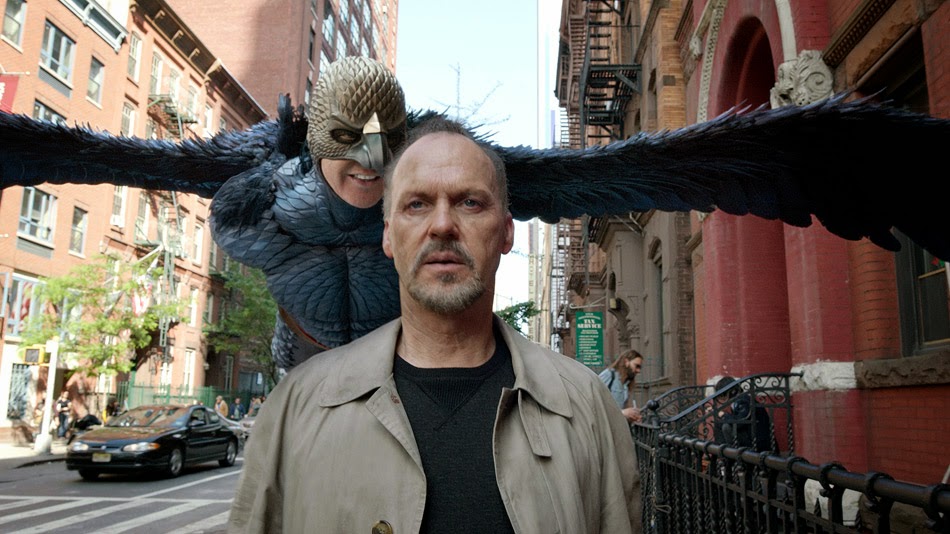 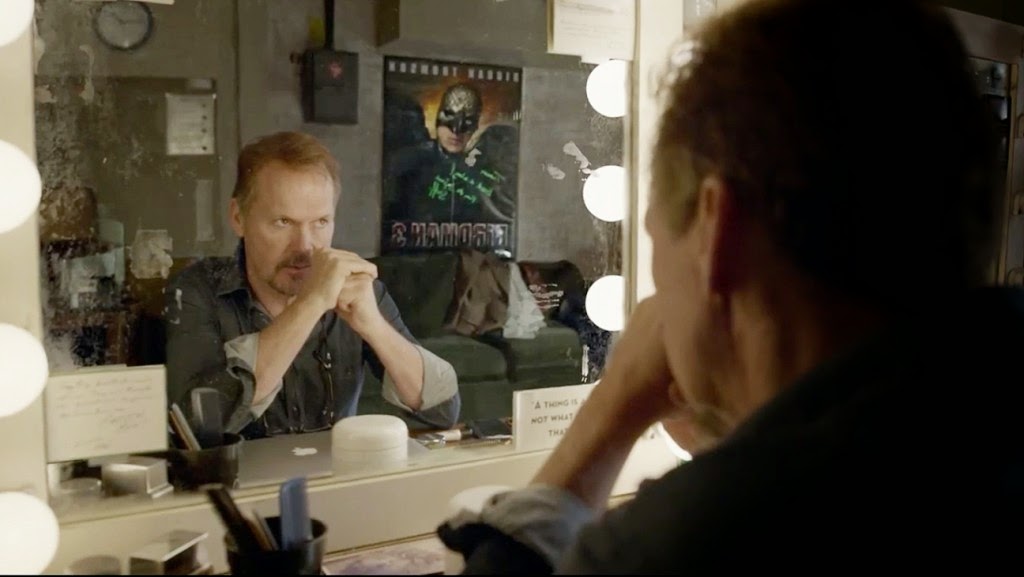 Directed and co-written by Alejandro González Iñárritu, Birdman has a jazzy visual style and focuses on the dark side of narcissism via the characters we meet.  Let's face it.  These are sour, wounded or selfish people trying to put on a show.  Riggan is divorced.  He was a frustrating husband and father.  His co-star in the play is a talented but self-absorbed New York stage actor played by Ed Norton. 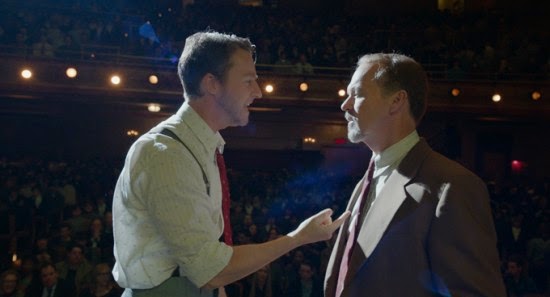 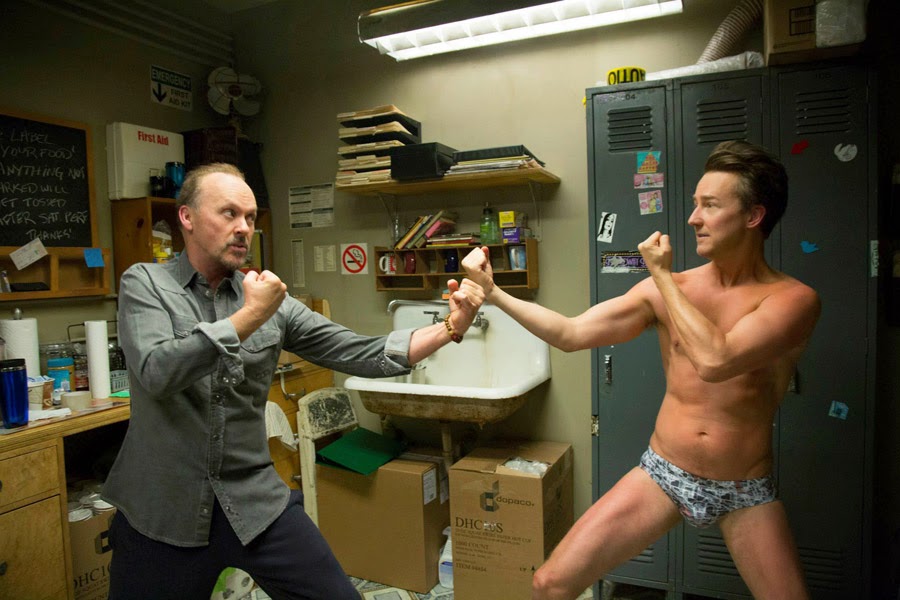 Norton seems to be doing a riff on William Hurt.  Riggan can't stand his young, annoying and vain co-star.  Other cast members are miserable.  The show's publicist is stressed out.  Riggan's daughter is angry at him.  The actors don't truly seem to be working together to put this Broadway show over.  The cast is a collection of individual egos, unconnected dots.  But Riggan will reinvent himself. 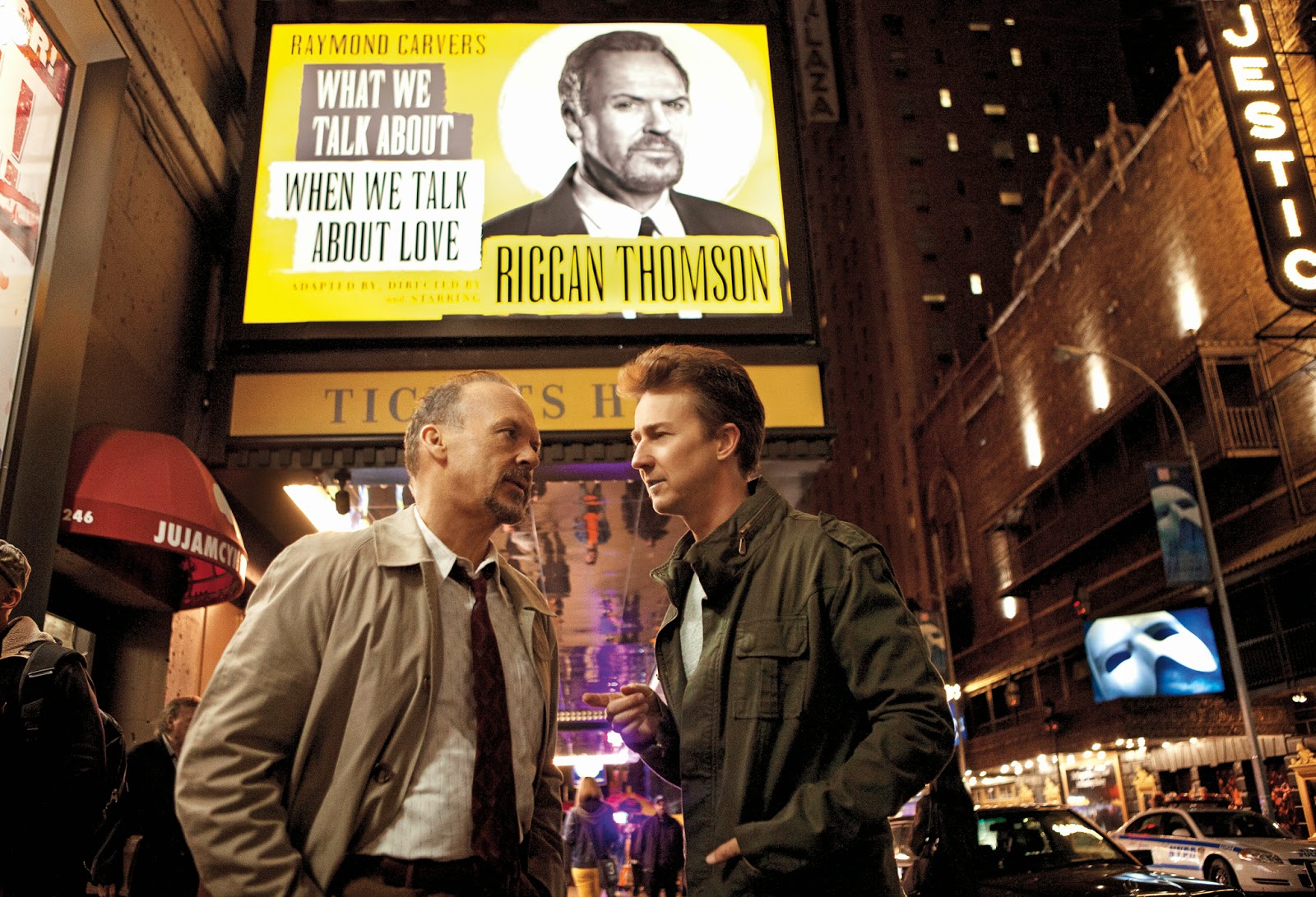 In The Band Wagon, we also have New York stage characters with pretty healthy egos.  But director Vincente Minnelli shows us the sunny side of narcissism.  The current genius of Broadway, director and actor Jeffrey Cordova, is the director and star in a hit production of a Greek tragedy.  He's slated to direct Tony's musical revue written by his friends, a successful husband and wife script and songwriting team.  They take Tony to see the play. He gets nervous about working with this high-tone golden boy of Broadway. 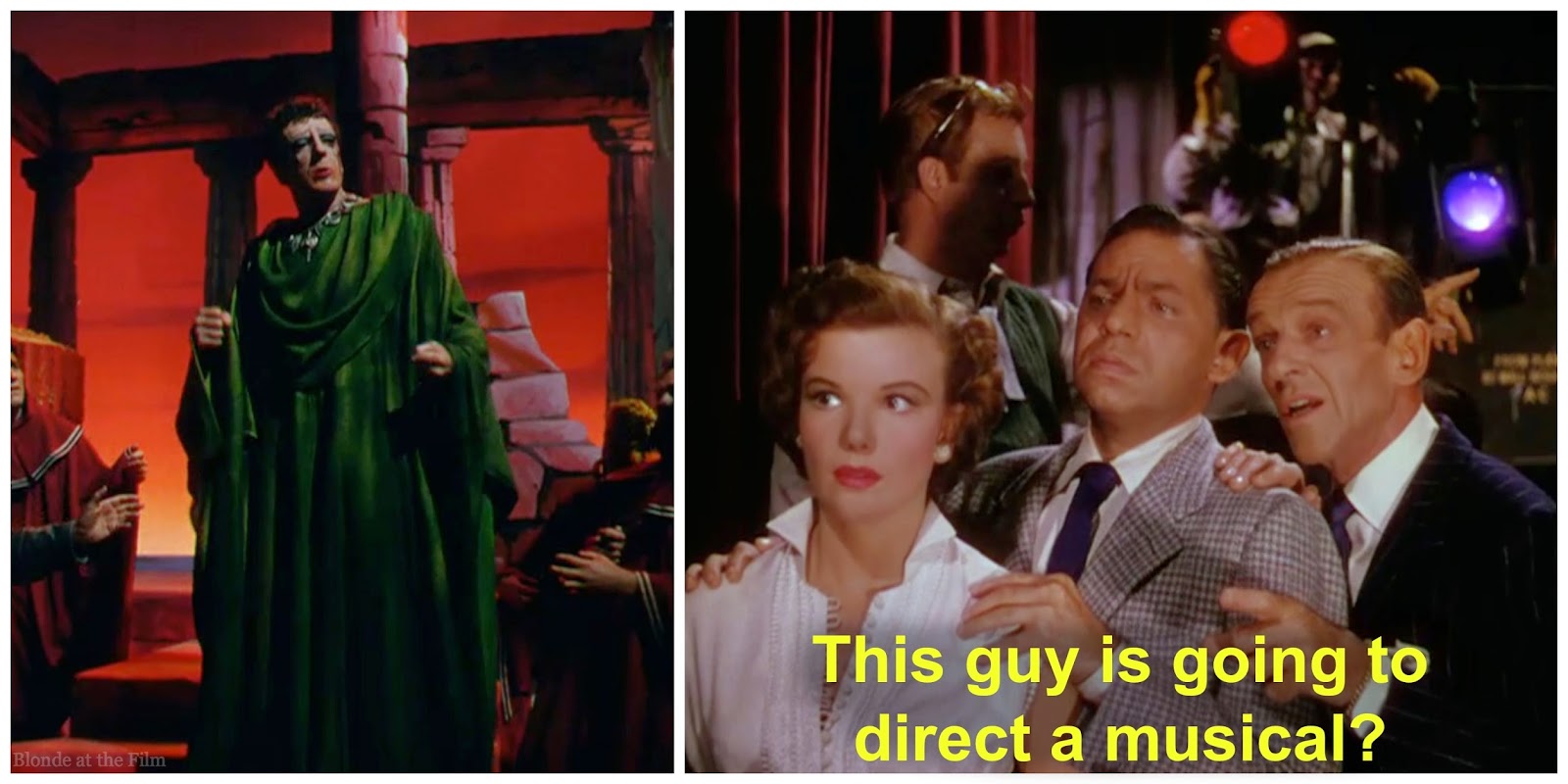 Jeffrey Cordova was a little send-up of actor José Ferrer (once married to singer Rosemary Clooney and the uncle of George Clooney).  For 1952, Ferrer won the Tony Award for Best Actor in a Drama and he won Best Director for three dramatic plays that year, one of which he starred in.

Cordova turns out to be a regular guy and a team player.  After he louses up the production with his overly-artsy ideas and intellectual excess that dumbfound audiences in out-of-town previews, he humbly hands the directorial duties over to Tony knowing that he can handle the jobs of both star and director.  Jeff willingly becomes just a cast member eager to make the show a hit.  Tony puts his own money into the show when backers pull out after the disastrous out-of-town preview.   Before this happens, Cordova not only restores Tony's confidence but tells him that he could make a stunning comeback in this revue. Jeff's philosophy is that they're all entertainers.  Jack Buchanan (far left as Cordova) co-stars with Fred Astaire, Nanette Fabray and Oscar Levant. 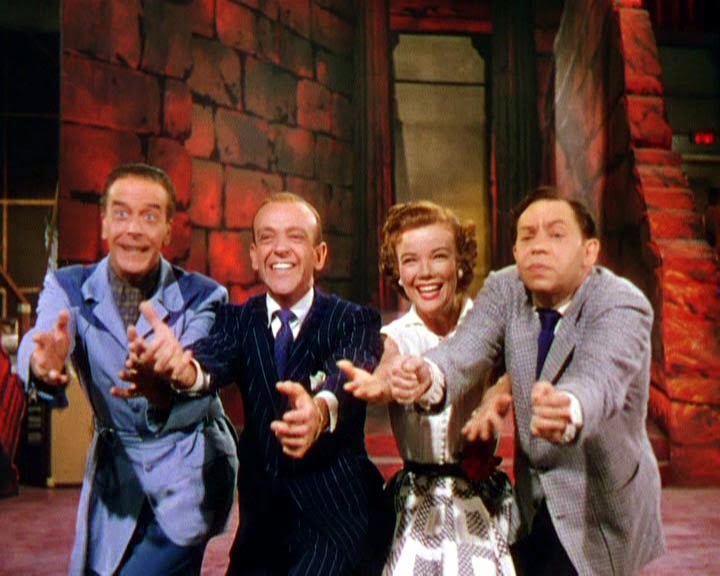 Tony's co-star is the current new toast of the NYC arts scene, ballerina Gabrielle Gerard (Cyd Charisse).  Her career is managed by her controlling and self-absorbed choreographer boyfriend.  She seems to be snooty at first, but she's really sweet.  She's been cast as Tony's leading lady and she's nervous about working with the famous Hollywood veteran.  She's younger.  She saw all of his classic musicals.  Tony thinks they're different types.  He's basically a hoofer.  She's from the ballet.  He worries about being older.  He thinks she's taller than he is when she wears heels.  He's touchy about his height. 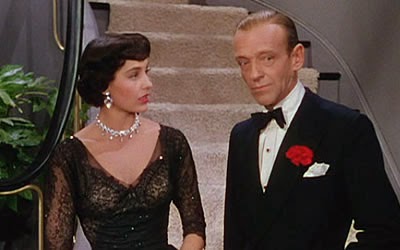 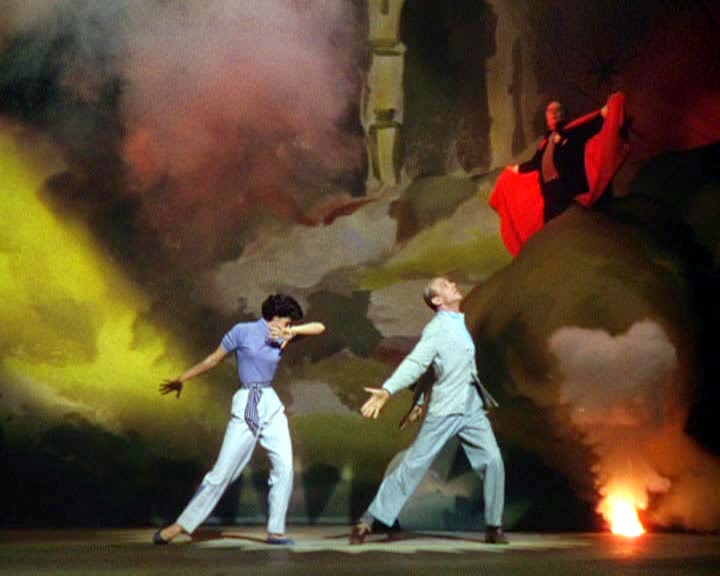 Tempers will flare at rehearsals.  An over-produced show will be fixed after it flops in tryouts.  Opposites will attract and fall in love.  Opening night will be a hit.  Tony Hunter will reinvent himself.  Like Astaire himself, he was famous in the 1930s for singing and dancing in his trademark top hat, white tie and tails.  Now he's dancing to a modern jazz beat.  In real life, Fred Astaire scored one of the biggest hits of his long film career with The Band Wagon.  He was in his early 50s doing the complicated Girl Hunt jazz ballet satirizing popular pulp fiction crime novels of the day.  Yes...in his early 50s. 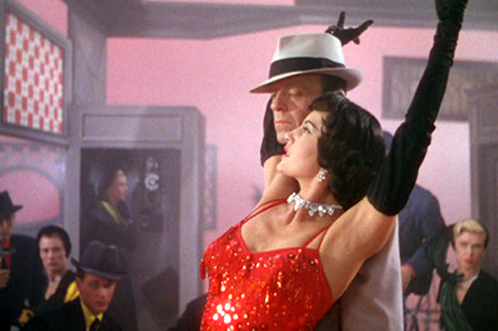 All the problems and arguments the company had during rehearsals were fixed.  The individuals work together as a team to put the show across.  Their show, The Band Wagon, is truly a collaboration.  We see how differences were solved in film's fabulous last number.  One example:  Ballerina Gaby wears heels and reinvents herself artistically as a vamp in that Girl Hunt jazz ballet.  How was the height situation worked out?  Tony wears a hat as the private eye.  The perfect touch.

Middle-aged Hollywood actors Tony Hunter and Riggan Thomson will both have memorable moments in Times Square when they transfer to Broadway. 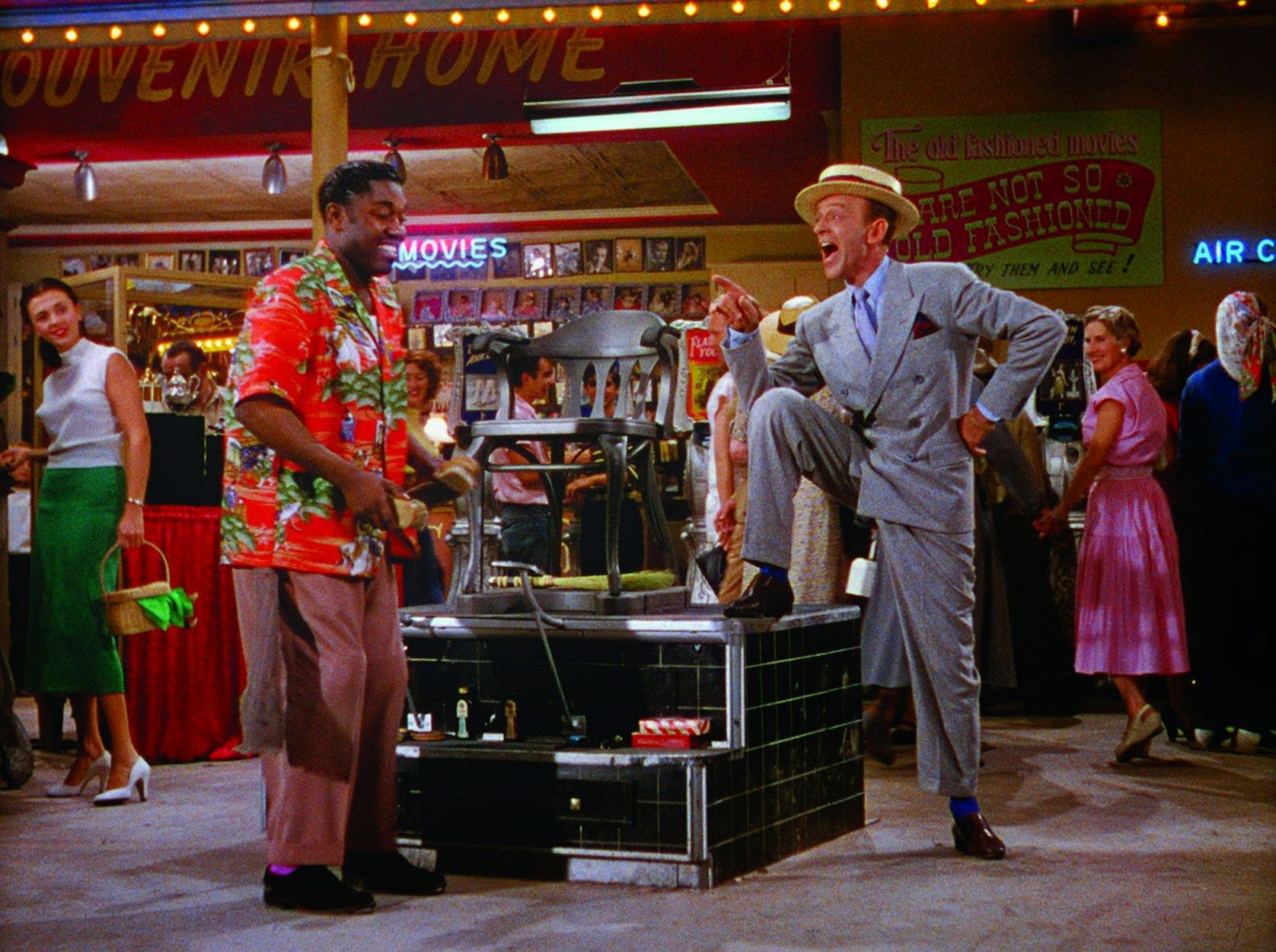 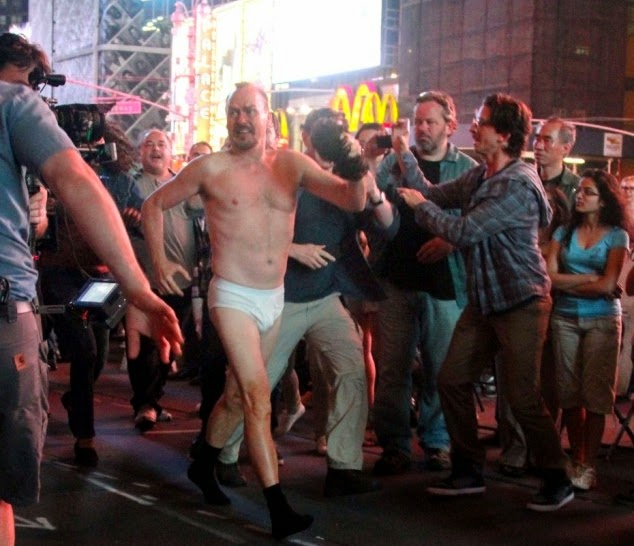 The end of Birdman is...let's say...surreal and leaves you with a question mark.  The play has its Broadway opening night and we get the reviews. 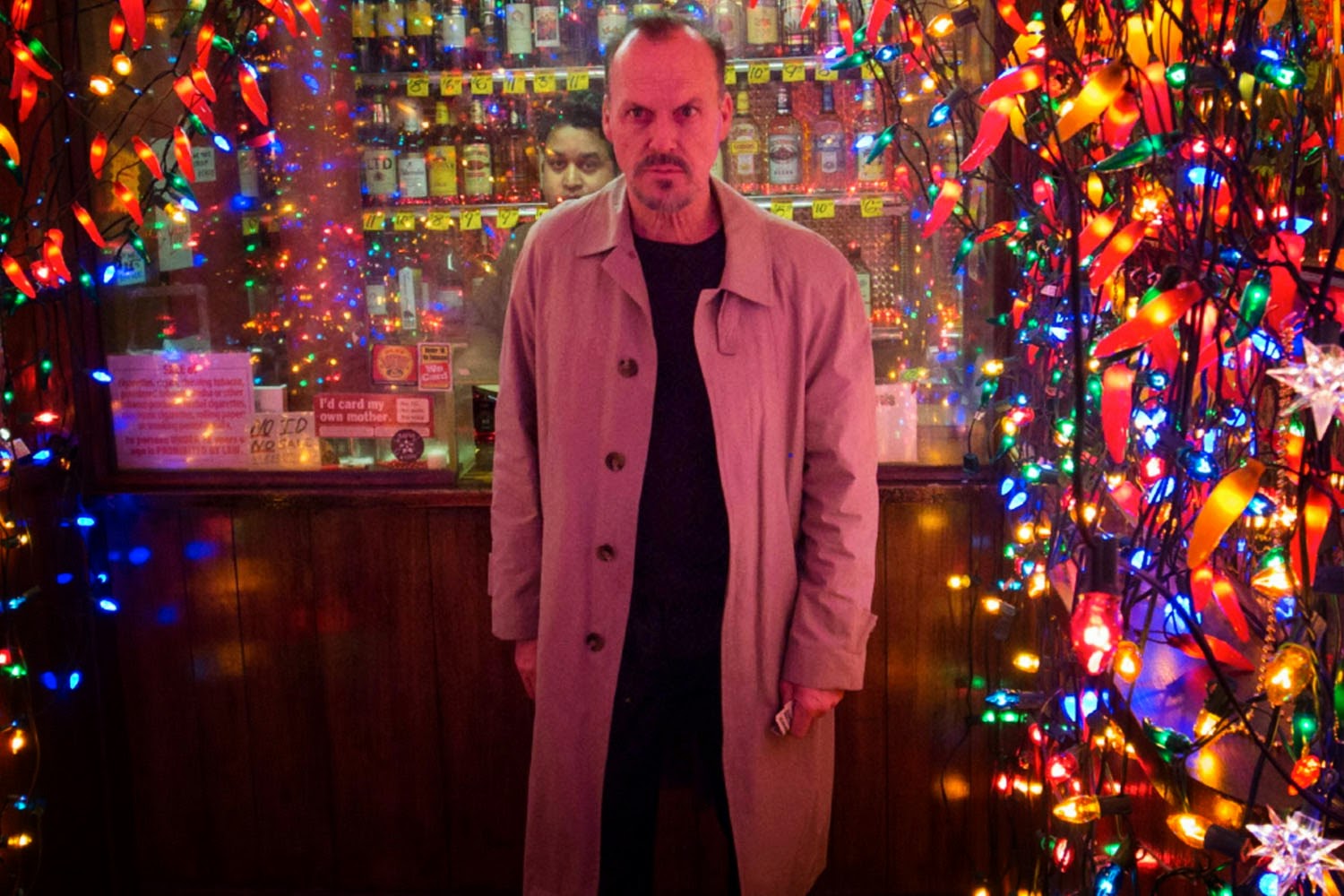 The Band Wagon gives us an unquestionable happy ending.  The play has its Broadway opening night and we get the reviews.  Gaby and Tony are a terrific couple onstage and off.  Once antagonistic, they're now in love.  They kiss and the main characters come together for a reprise of "That's Entertainment." 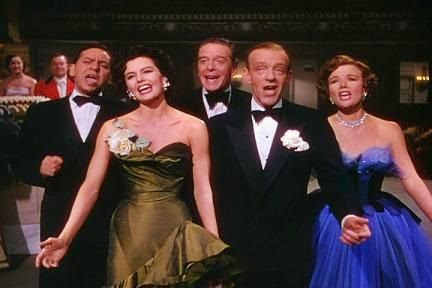 Birdman and The Band Wagon.  The same key elements such as a famous middle-aged movie actor in need of a comeback and the same location -- Broadway -- with an irritating younger co-star, a troubled production that has its share of meltdowns before it goes up on opening night and the bloom of an unexpected romance.  But the two movies are so very different.  See for yourself.  For her first leading role in a Hollywood film, Cyd Charisse was "beautiful dynamite" in one of the best films of 1953.  She'd do more great dancing as Gene Kelly's leading lady in Brigadoon and It's Always Fair Weather before reteaming with Fred Astaire for Silk Stockings.