Thank you, Chris Rock.  Thank you so much.  We have needed a movie like Top Five for a long, long time.  It's a movie that gives Hollywood some fresh, new images of ethnic life in the big city to ponder.  Also, it shows why our black actresses deserve the same shot at good script opportunities that multi-Oscar nominated young white actresses like Jennifer Lawrence and Amy Adams get.  Thank you, Chris Rock!

You know how sometimes you go to see a new comedy and then realize that all the best parts of it were  shown in the trailer before it opened?  That is so not the case with Chris Rock's Top Five.  All of us in the audience howled with laughter at scenes not hinted at in the trailer.  There are cameo appearances in this comedy.  Be careful reading reviews and logging on to social media.  Today's critics and Tweeters give away much too much and may spoil those surprises.

If I had to name my Top Five favorite Chris Rock films, this new film of his would be Number One.  He stars in it.  He wrote it.  He directed it.  The comedian/actor has seen the work of and was influenced by the classic films of Charlie Chaplin, French director Eric Rohmer, Sidney Lumet, Spike Lee and fellow comedian/actor/director Woody Allen.  Like Woody Allen has done, Rock plays a comedian/entertainment industry worker who takes stock of his career, his relationships and the substance of his personal life.  Allen did this in Annie Hall, Stardust Memories and Hannah and Her Sisters.  Rock does that as a rather immature, alcoholic comedian-turned-major movie star named Andre Allen.  Action movie comedies made him a big movie star.  He wants to grow artistically and has released a history-based slave drama, a deep-dish drama that seems destined to tank at the box office.  Andre does interviews to promote his new film. 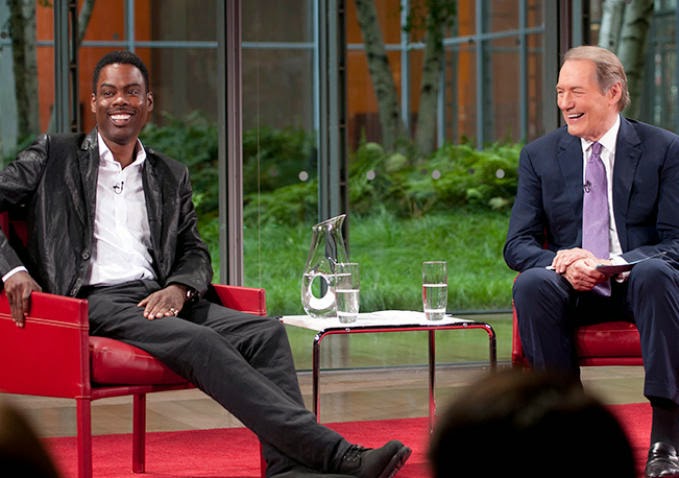 In flashbacks, he begins to take a hard look at his life and career as he's being interviewed by a reporter for The New York Times.

In addition to his new movie, he's on the brink of marriage.  The wedding will be a sure-fire ratings champ on his fame-hungry fiancée's reality TV series. 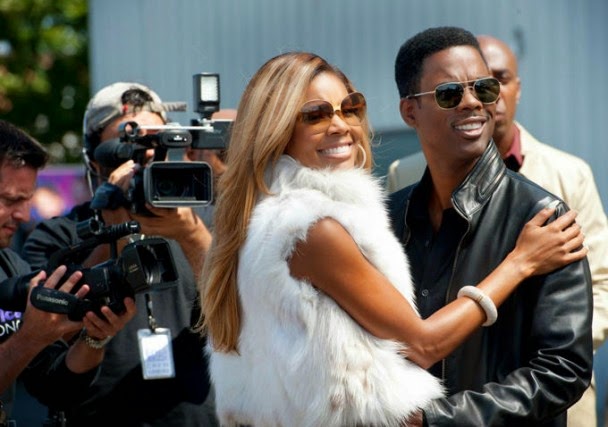 Andre is not Chris Rock.  This isn't an autobiographical feature.  There's a bit of other comedians in his performance.  There are elements of other comedians and, perhaps, touches of some hip-hop stars in it too.  Top Five takes us along in a celebrity's life for a day.  We see what his fame looks like on film and TV and we see what his fame really is.  We will see him grow up a bit and deal with the reality of his life. 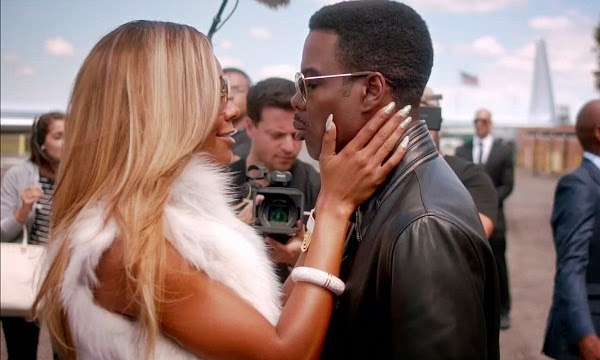 Top Five is hysterically funny, delightfully lewd, thought-provoking and it presents new images of black people that challenge the Old Guard thinking in Hollywood.  In a way,  it also challenges the circle of aged Caucasian film critics.  Earlier this year, I reviewed a little-seen new film called Gimme Shelter.  I reviewed it on cable's Arise TV weekend film review and entertainment news show, Arise On Screen.  The one thing I raved about in Gimme Shelter was the raw, stunning performance Rosario Dawson slammed across as the physically abusive, drug-addicted mother. 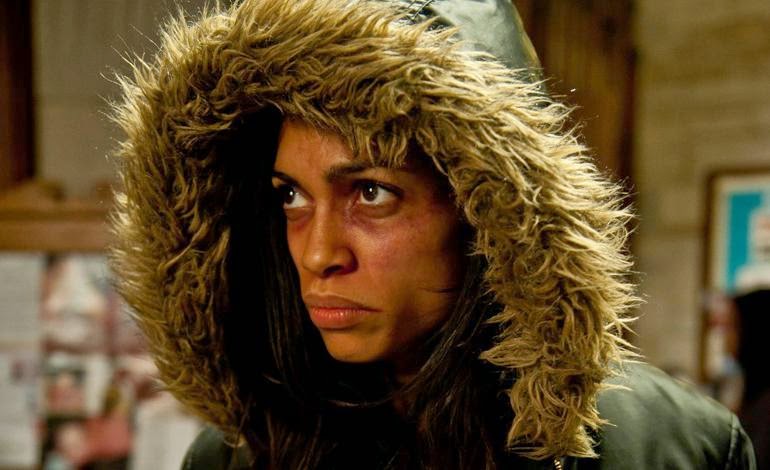 I said that Dawson is such a fine actress, we should start referring to her as "future Oscar nominee, Rosario Dawson" because, somewhere down the line, she's destined to get an Oscar nomination.  Others on the show agreed.  I've been a fan of hers for years.  Top Five should bring Ms. Dawson the bigger Hollywood attention she's long deserved. 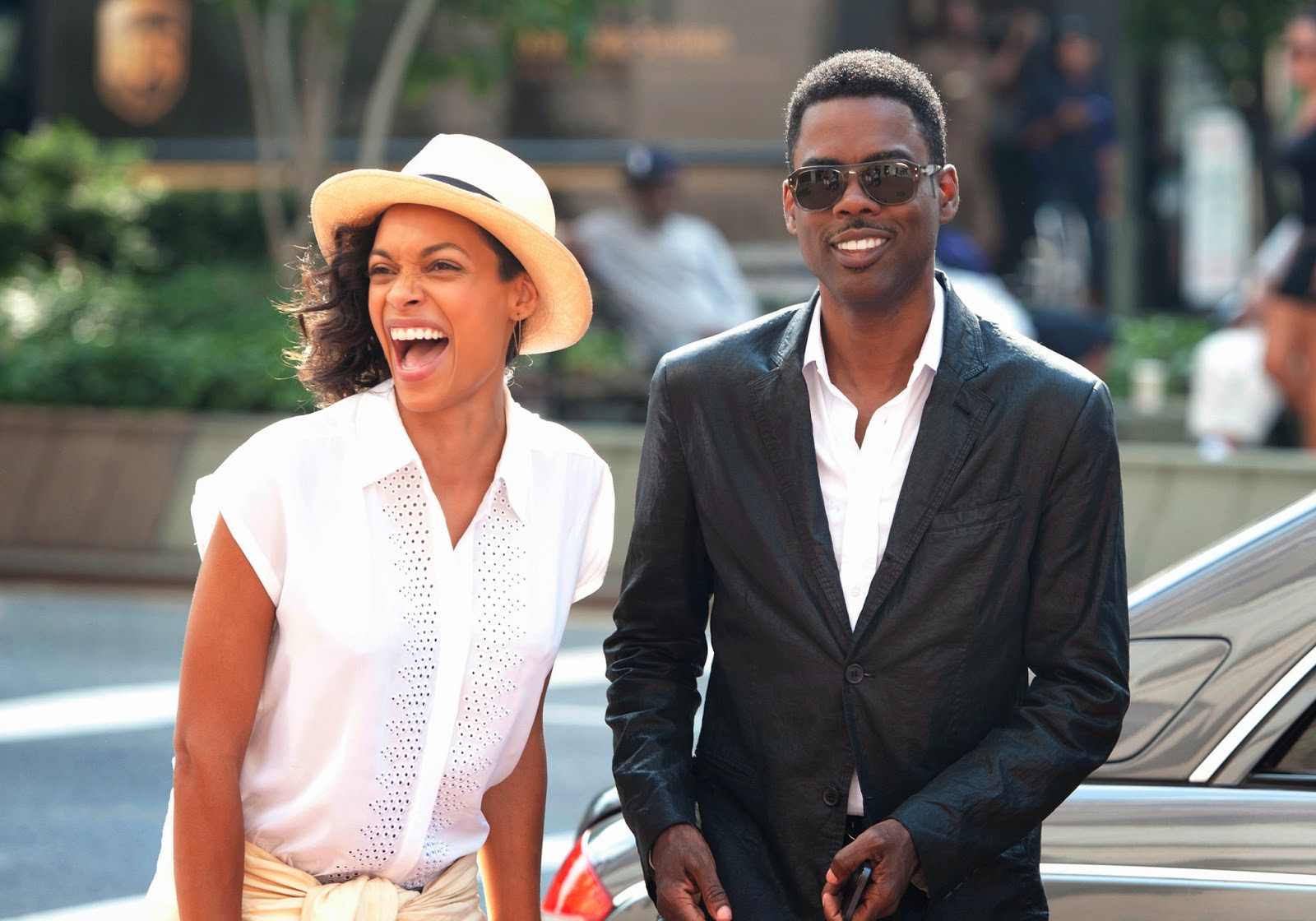 She plays the reporter for The New York Times in Top Five.  Dawson is the leading lady.  Her character, Chelsea, is not a black/Latina maid or a hootchie mama.  She's a writer for one of the nation's top newspapers. 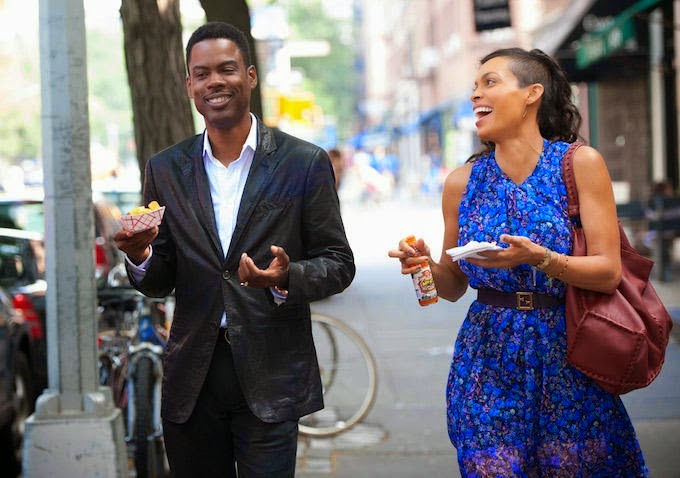 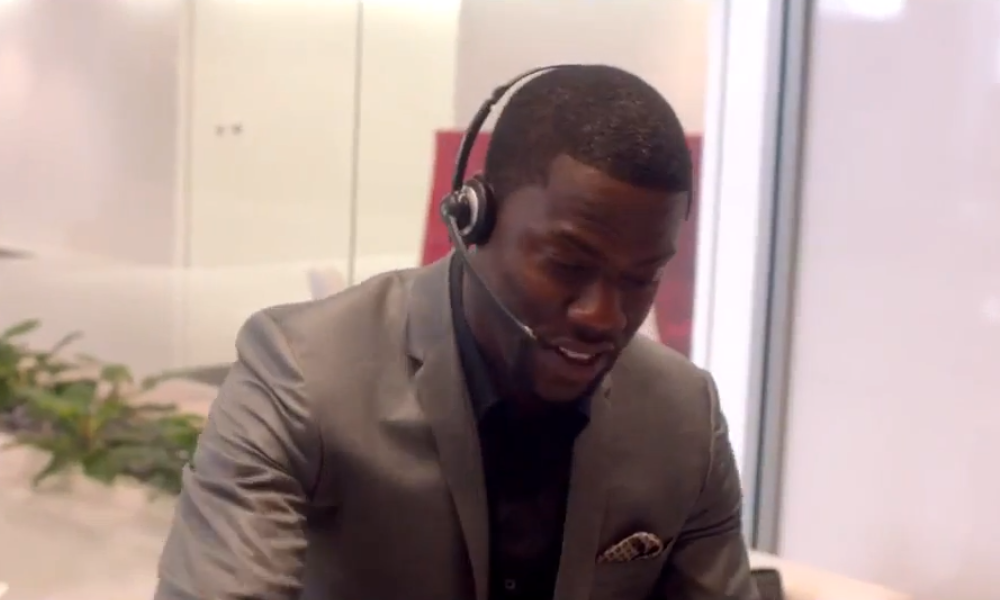 Hart plays the one black agent in that whole great big company.  By the way, I've been in TV for a long, long time.  When I have met with agents in top agencies for possible representation in New York City, I have seen only one black agent.  That was in 1990.  At William Morris.  The last time I met with agents was in 2008.  All the black and Latino folks I saw were either the receptionists, working in the mailroom, or they were part of the maintenance staff.  That Kevin Hart business broke me the heck up because it is just too real.

Chris Rock takes us from Harlem uptown to Fifth Avenue in midtown to the West Village downtown.  We see a New York City that's not all black, not all white, not all rich, not all poor, not all heterosexual.  It's real.  It's the New York I know and love.

Now, think about the movie critics we've seen on network TV morning news shows.  Or on local TV news.  If there was a casting call sent to agents for "someone to do play a bit part as a movie critic on a morning TV news show" in a film, how many black and Latino actors would be submitted to audition for the part? How many women of any color would be submitted?  Movie critics on TV has been a predominantly white boys club -- Gene Shalit, the late Joel Siegel, Siskel & Ebert, Ben Lyons & Ben Mankiewicz,  Richard Roeper, Leonard Maltin, David Edelstein now seen on CBS Sunday Morning, Neil Rosen seen by New Yorkers in NY1.

They told and tell us black folks why we should see The Color Purple, Hustle & Flow, Precious, The Help and 12 Years a Slave.  Did you see any black critic on TV telling you to see 12 Years a Slave?  Nope.  But columnist Rex Reed wrote a rave review of it that got quoted in national press.  Are Rex Reed and David Edelstein hip to the Tupac, Questlove, Salt-N-Pepa and DMX references and elements in Top Five if they review it?  I wonder. 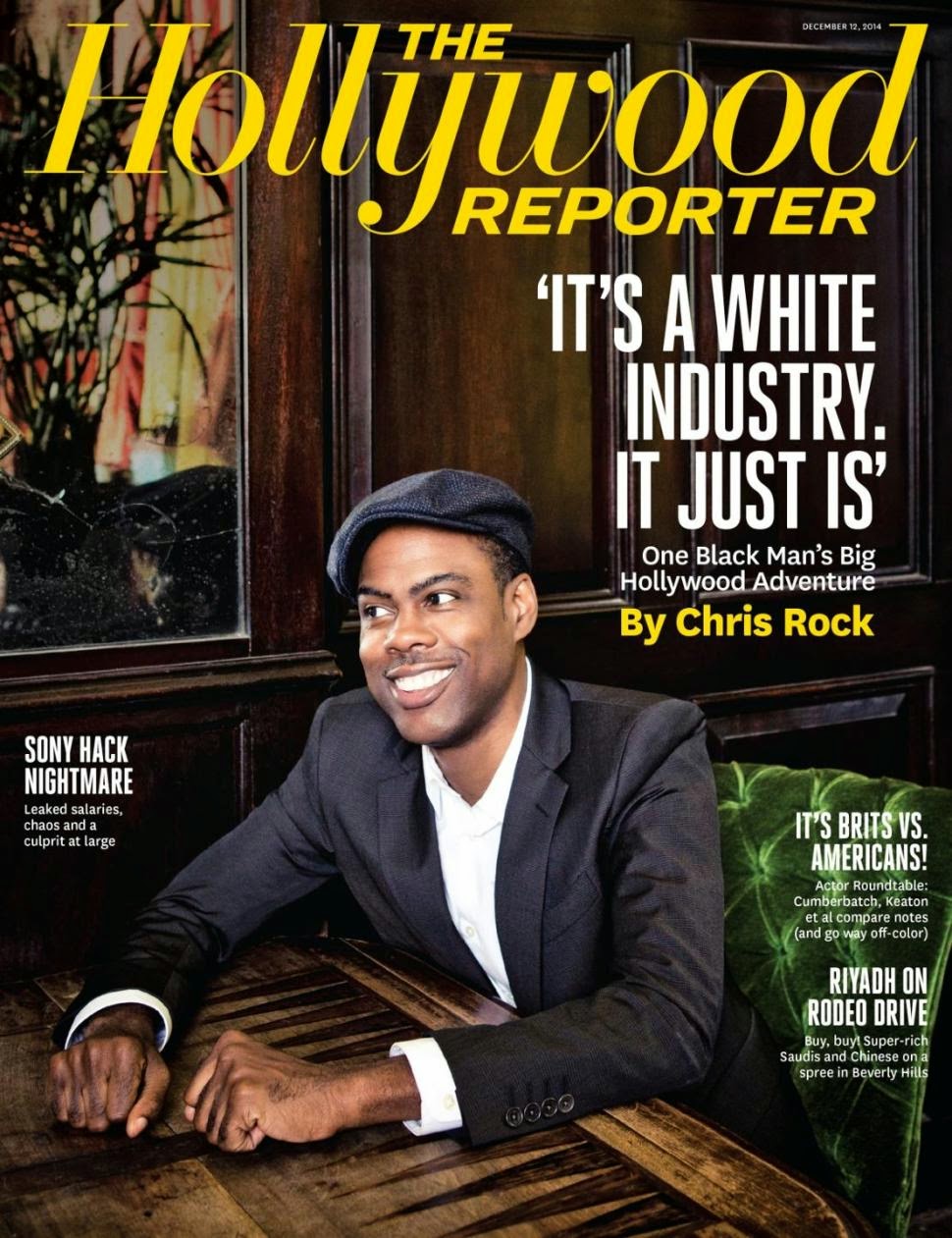 In an article for The Hollywood Reporter, Rock recently wrote that he could see new movies for weeks without seeing a major part played by a black actress.  That's how the big studio Hollywood industry is.  Black actresses know that's true.  Oscar nominated actresses such as Whoopi Goldberg, Viola Davis, Halle Berry, Alfre Woodard and Taraji P. Henson turned to TV because their mailboxes weren't stuffed with quality Hollywood movie script offers after their nominations.  The classy, sophisticated, gorgeous Gabrielle Union shows us that she should be considered for the same kind of acting opportunities that Jennifer Lawrence and Amy Adams got in, for instance, American Hustle.  She's excellent as the reality TV star.  I've been a fan of her film and TV work for over ten years. 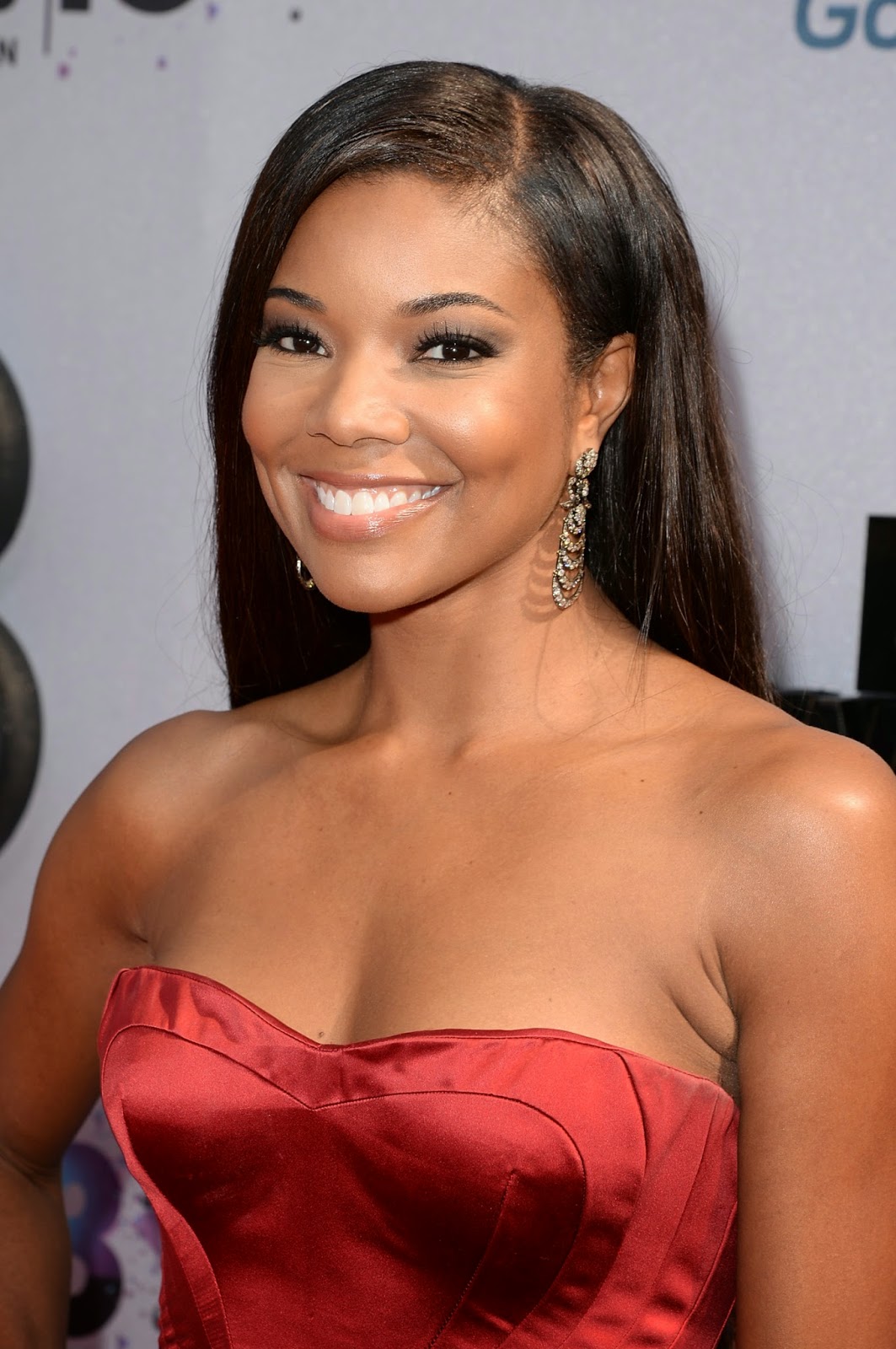 She is one versatile actress.  Rock highlights her versatility.  He also shows us that Sherri Shepherd, Cedric the Entertainer and JB Smoove are not "just comedians" either.  They've got acting chops too.

Over the years, we've seen Rock mature as a talent.  Before he gave us this 1 day in New York with comedian/actor Andre Allen, he gave a sophisticated performance as the harried dad/boyfriend and NPR host in the comedy 2 Days in New York.  I reviewed it in a TV pilot two years ago.  Here's a clip:
The new depth, the fresh acting promise that Chris Rock showed in that Julie Delpy indie comedy is fulfilled in his new Paramount Pictures release.  Bravo, Mr. Rock.  It was great to see you mature as comedian Andre Allen in Top Five.