Magic Meryl, INTO THE WOODS

I had a wonderful Thanksgiving Day here in New York City.  One of the highlights of that day was attending a special screening of Into The Woods early that afternoon.  What a thrill it was to see the movie version of a Broadway musical starring actors who can really sing!  AND it stars a dazzling Meryl Streep as The Witch.  She's a female who is frightening and funny, a female who goes from ugly to glamorous.  This role was done on Broadway by Bernadette Peters.

How is Meryl Streep in the acting and singing department here?  I think she's got a great shot at an Oscar nomination for Best Supporting Actress.  She could have an equally great shot at tying the late Katharine Hepburn's record number of Oscar victories.  For Into The Woods, Meryl Streep could win her fourth Oscar.  She's that good in it. 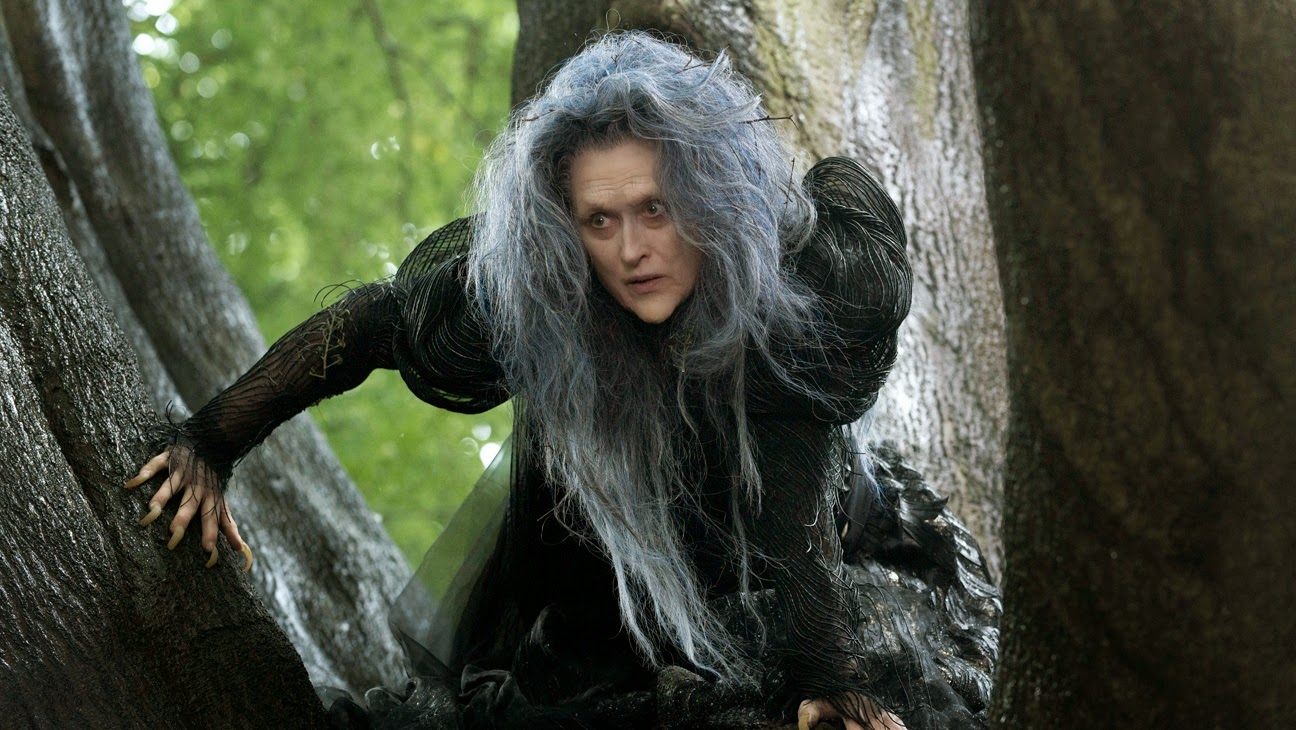 She sang in the movie Ironweed (1987) with Jack Nicholson, performance that brought her one of her Best Actress Oscar nominations.  She sang the closing number in the Hollywood mother/daughter comedy, Postcards From The Edge (1990).  She and the song got Oscar nominations for that.   She sang in Death Becomes Her (1992).  She sang a lot in 2008's huge box office hit Mamma Mia!  Her singing left me awestruck in Into The Woods.  I've been a Streep fan since she was new to movies in the 1980s.  I knew she could sing -- she wanted to do the film version of Evita had it been offered to her -- but I didn't realize she could sing so well.  I saw Into The Woods on Broadway.  When Streep sang "Stay With Me," I felt like I was hearing it for the first time.  In her performance, and in the film overall, you really hear the wit and wisdom, the absolute genius of the Stephen Sondheim lyrics.  "Stay With Me" is about letting go.  I had those same child/parent conflicts with my mother when I was young.  I'm lucky my mother is still with me.  All our conflicts have been grown out of and resolved.  Meryl Streep is marvelous as The Witch. 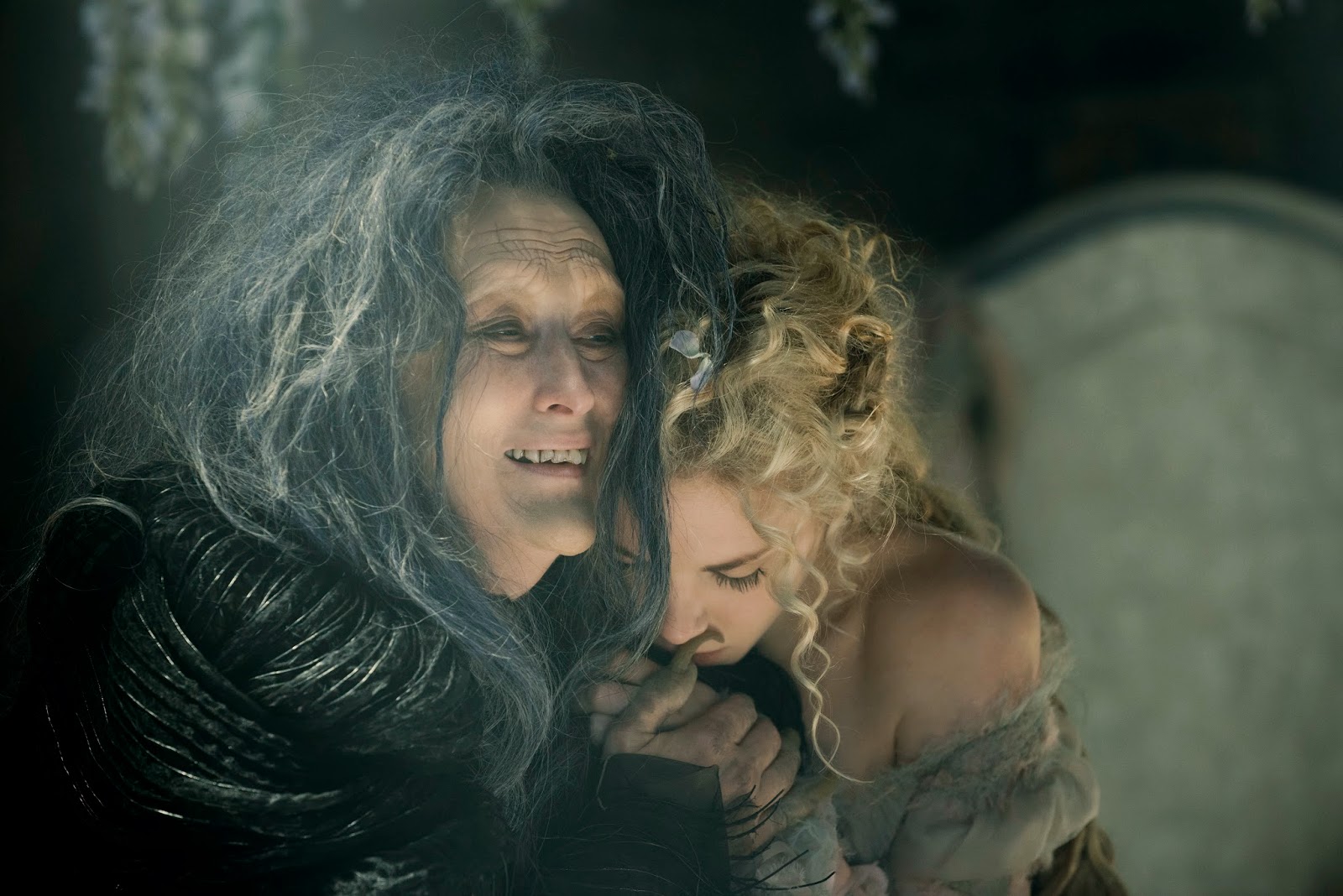 As her character sings to her daughter, Streep reveals the heartbreak in The Witch.  We see what turned her into a witch.  She makes the witch human.  We can relate to this fantasy character.  It is a touching monologue set to music.  Here's a sample:
I was skeptical that this musical would work on film.  Mainly because Disney got involved.  I was afraid Disney would dilute the emotional essence of it and make it basically a movie version of ABC's Once Upon a Time.  Core emotions and some of the darkness of the second half have been kept intact.  This is essentially a tale of parent/child relationships at the heart of beloved fairy tales.  All those stories have a moral.   As kids, maybe we didn't realize the depth of these stories by the Brothers Grimm as we were swept up in the fantasy and thrills of them.  But think about.  Jack and the Beanstalk.  What makes him climb up that beanstalk and face danger in the form of a giant?  He's burdened.  He's got the frozen dreams of his frustrated single mother on his back.  She wants things -- material things to make her happy.  She's angry at life because she's got nothing but a cow that can't give milk.  She takes her frustrations out on her son.  Jack puts his life at risk trying to make her happy instead of being able to enjoy his youth.  Jack's mother will get the things she wants.  But at what cost?  Tracey Ullman plays the mother. 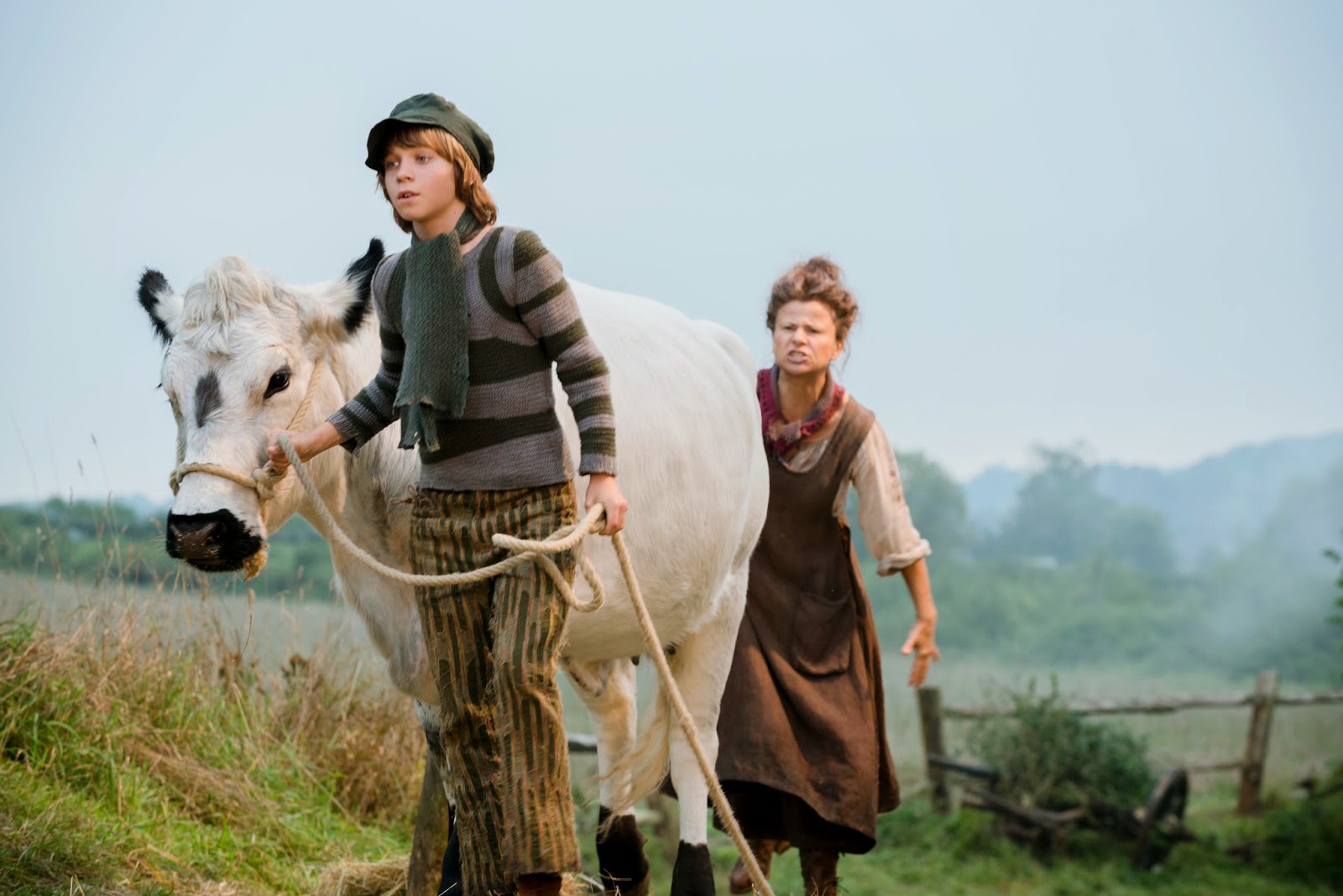 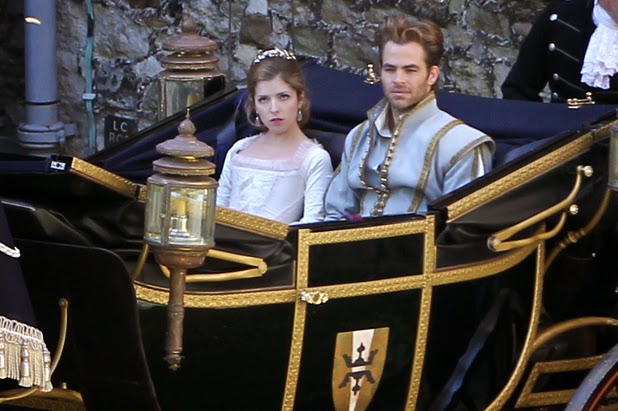 The cast is excellent.  As I wrote in an earlier blog post, Chris Pine  a major surprise.  Who knew the drop-dead handsome dude from Star Trek movies had such a terrific singing voice?  He's perfectly shallow as Cinderella's Prince Charming, storybook eye candy.  Emily Blunt and Meryl Streep were assistant and boss in The Devil Wears Prada.  Now they're Baker's Wife and Witch.  Blunt shines in a lead role.  So does James Corden as The Baker, a man who has father abandonment issues and is nervous about becoming a father himself.  He had the same kind of strained relationship with his father that I had with mine.  Again, I connected to the human side of a fantasy character.  I loved Corden and Blunt together.  James Corden will soon be a CBS late night host. 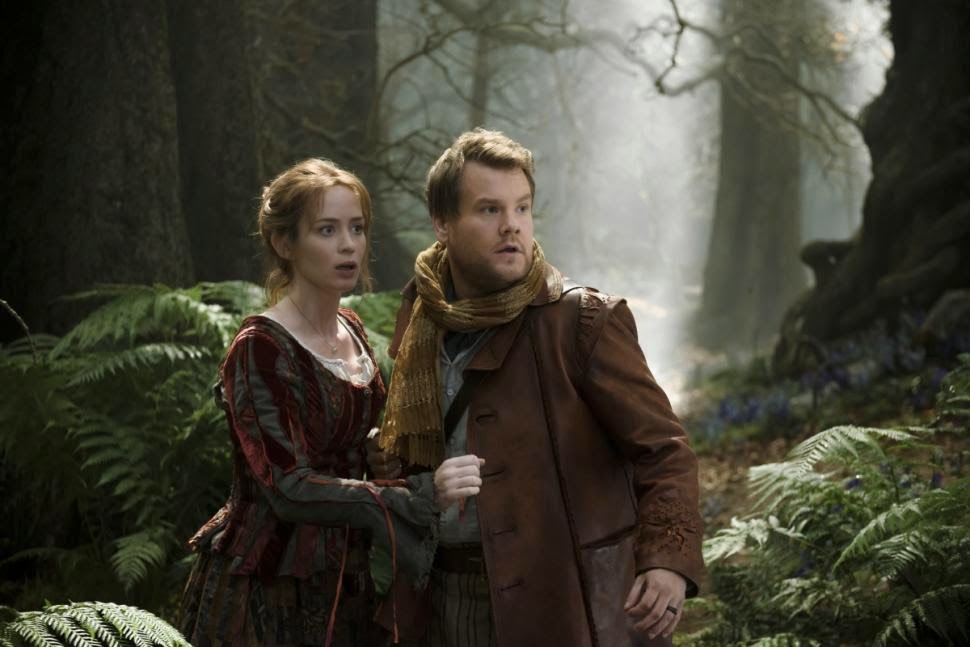 If any part really got Disney-fied, it was The Wolf as played by Johnny Depp.  That character was more sexual in attitude and costume design on the Broadway stage opposite greedy Little Red Riding Hood.  Here, he looks like a Hollywood wolf in a 1940s Tex Avery cartoon.

Parents will dig Into The Woods and so will the kids.  Unlike the new movie remake of Annie, this musical will entertain boys and girls under the age of 12 and well over the age of 12.  There's enough action/adventure, wit and special effects to hold their interest.  Parents on a date night will also love it.  If someone asked me out on a date, I'd dig seeing Into The Woods again.

Directed by Rob Marshall, I feel this is Marshall's best film since Chicago, the winner of the Oscar for Best Picture of 2008.  Into The Woods opens on Christmas Day.  I think it'll land a Best Picture Oscar nomination.  I got so much new meaning out of and appreciation for Sondheim's score when I saw this fine film that it makes me wonder how happy his relationship with his parents was.  Especially the relationship with his mother.