Happy Birthday, Spartacus!  Kirk Douglas is a true Hollywood legend.  Famed for his dimpled chin, the physicality and intensity he brought to his film performances -- and for his acting talent, he is Hollywood royalty.  Not all his films are classics in the quality sense of the word.  Heck, who can hit a home run all the time?  But the homers he hit still impress today.  Look at Spartacus, the 1960 film he did with director Stanley Kubrick. 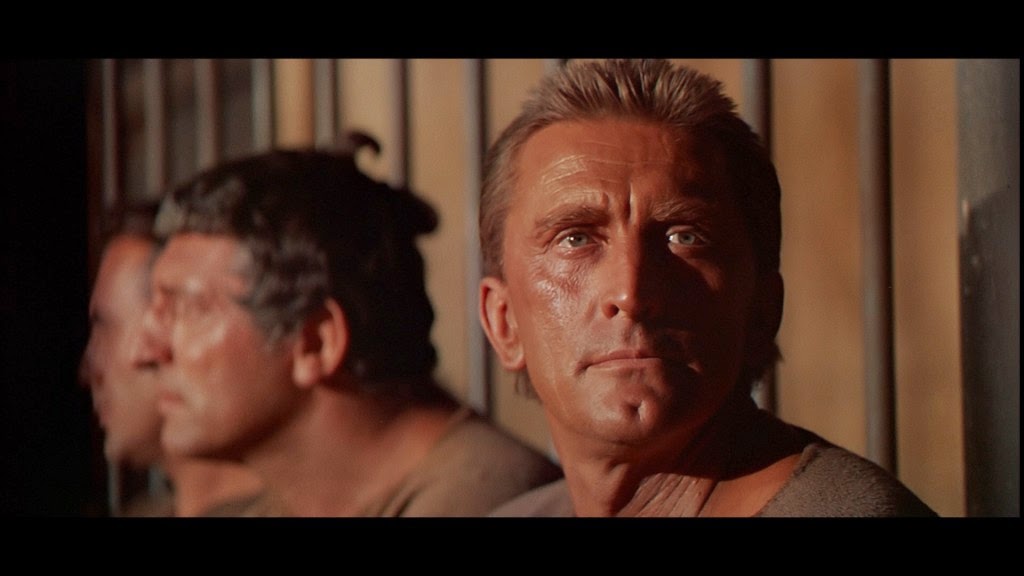 The best Kirk Douglas films prove that movies can entertain, enlighten and educate.  This is a great example.  To most critics who hailed it, Spartacus was the story of a slave revolt.  The movie came out in the early 1960s.  I grew up in South Central Los Angeles.  My parents saw more to Spartacus than that.  My parents felt that Kirk Douglas was making a strong, passionate statement on the importance of the Civil Rights movement in America at that time.

As Spartacus, Kirk Douglas brought dreams of freedom to the big screen that my African-American parents deeply understood.  Dalton Trumbo, who shared a birthday with the star, wrote the screenplay.

When I was a kid, one of the films Douglas did with director Vincente Minnelli aired on NBC.  It was Lust for Life.  Mom watched it and invited my sister and our little brother to watch it with her.  My love affair with classic films had already begun, so watching the movie with Mom was fun.  It was fun family time.  That family time introduced to the life and work of painter Vincent Van Gogh, the character Kirk Douglas portrayed. 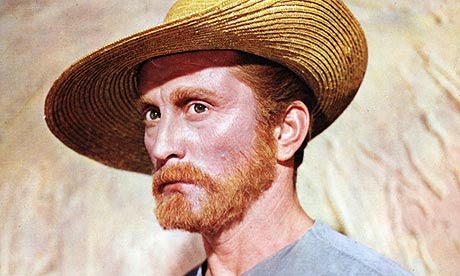 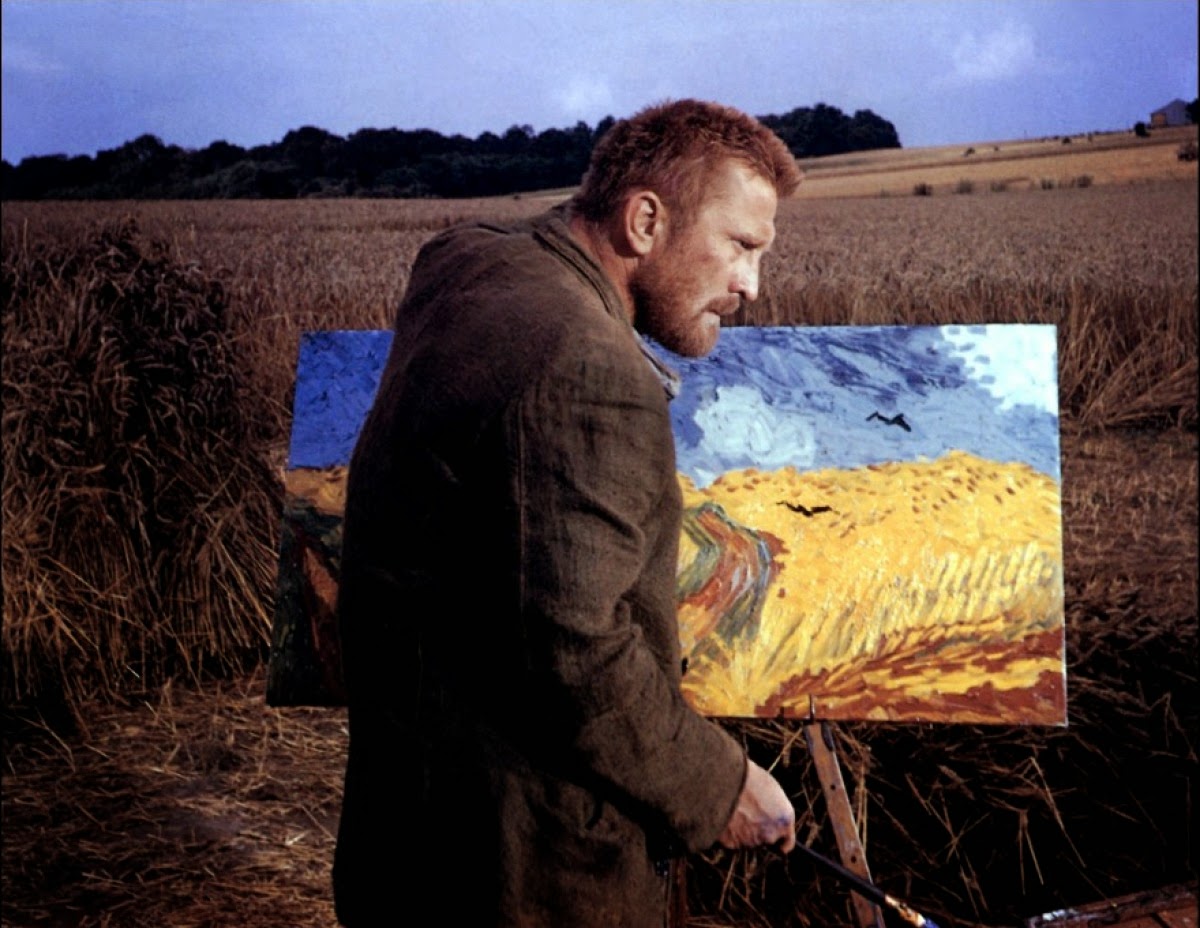 I went to grade school Monday morning knowing something about Vincent Van Gogh because of that classic film starring Kirk Douglas.

Among the actor's other home runs are another film he did with Vincente Minnelli, The Bad and the Beautiful.  It's one of my favorite Hollywood-on-Hollywood dramas. 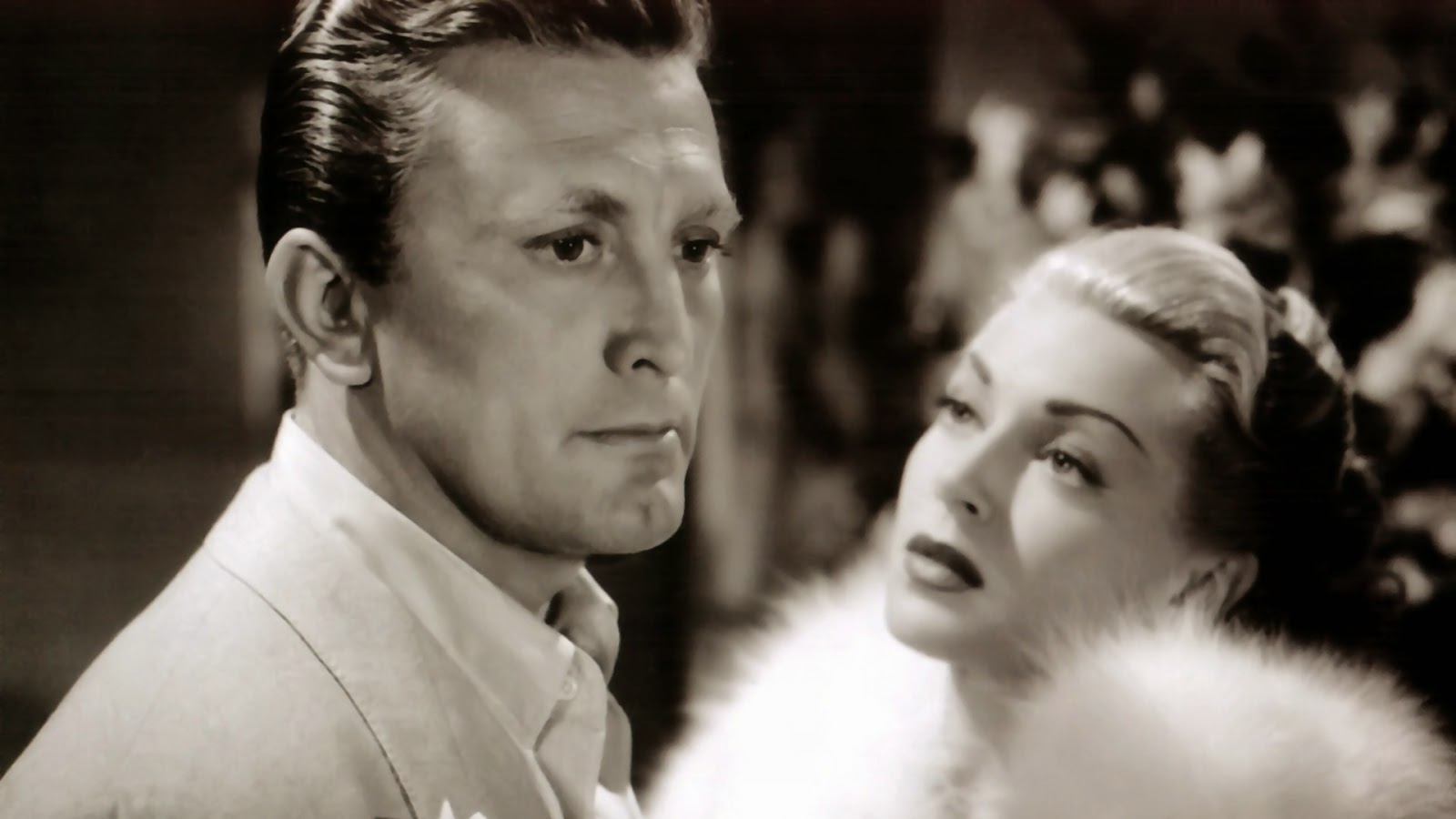 His Paths of Glory, another film he did with Kubrick, is a great anti-war statement that still hold up today. 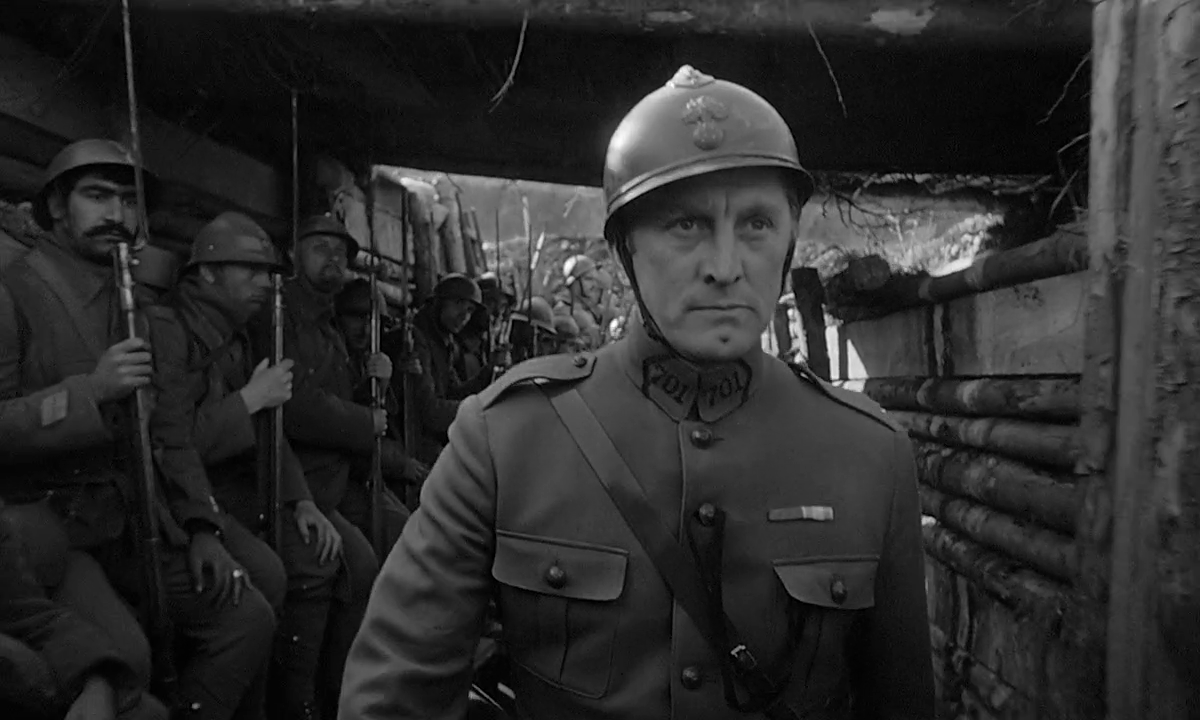 I am thrilled that his fierce performance in Billy Wilder's long-unappreciated Ace in the Hole has been rediscovered, restored, remastered and given the respect it deserves. 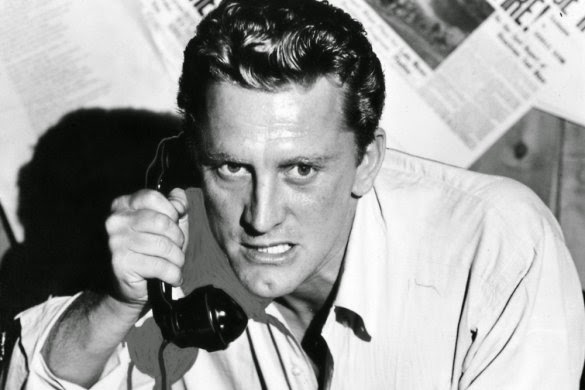 What a brilliant, biting look at the dark, greedy side of American journalism!  Critics hated this 1951 movie when it came out and the public didn't love it either.  For a long time, it was a public domain movie retitled The Big Carnival.  After events like coverage of the O.J. Simpson trial, Wilder's film became timely and got the attention it deserved.  Wilder and Douglas gave us a "media circus" in this film four decades before we started using that term. 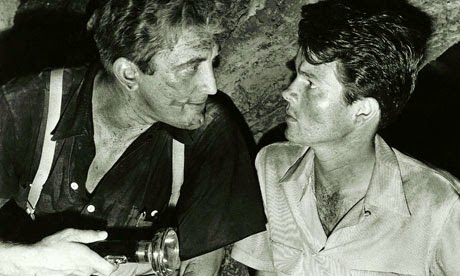 And there's Douglas' smaller film that boasts one of his best performances.  He's the independent cowboy at odds with a changing society in the modern western, Lonely Are The Brave.  Dalton Trumbo worked on the screenplay for that 1962 release.

I totally dig TCM (Turner Classic Movies).  If I saw that these Kirk Douglas films were airing when I was home from work, I arranged my nighttime schedule so I could be home to see them:  Out of the Past, Champion, Detective Story, A Letter to Three Wives, Seven Days in May and Young Man With a Horn.  That one, co-starring Juano Hernandez.... 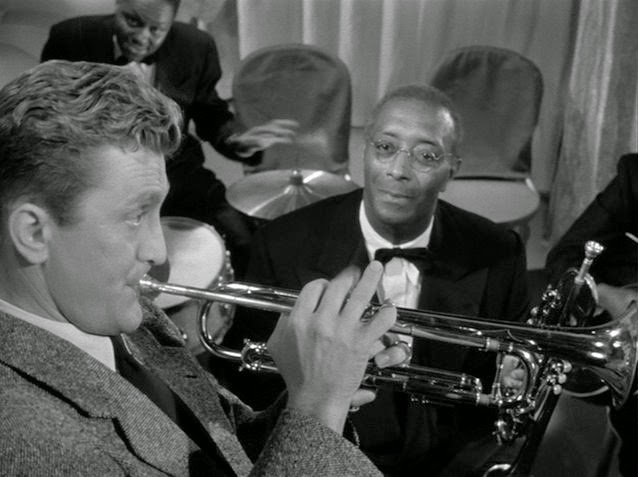 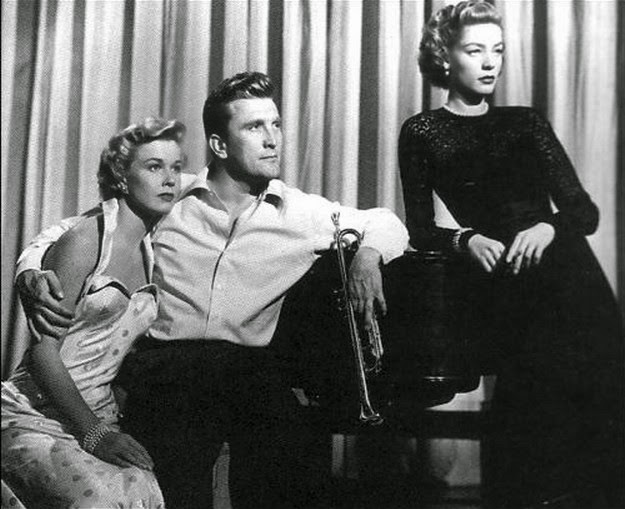 ...Doris Day and Lauren Bacall has been a favorite ever since I first saw it on local TV's Million Dollar Movie.  Solid performances, good story and a knock-out jazz soundtrack.

I am still in awe of the luck, the privilege, the opportunity I had to interview Kirk Douglas in 1988.  He was my sole guest for the premiere of my prime time, weeknight celebrity talk show on VH1.  He was the ultimate class act.  A most gracious gent, he charmed us all.

At the time, the star was promoting his well-received autography, The Ragman's Son. 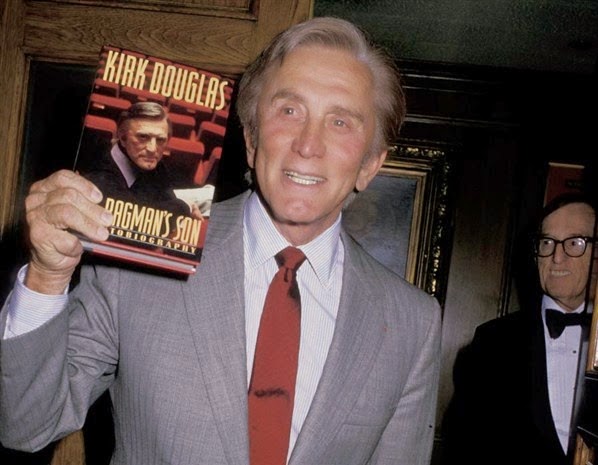 It was his first of several publications. 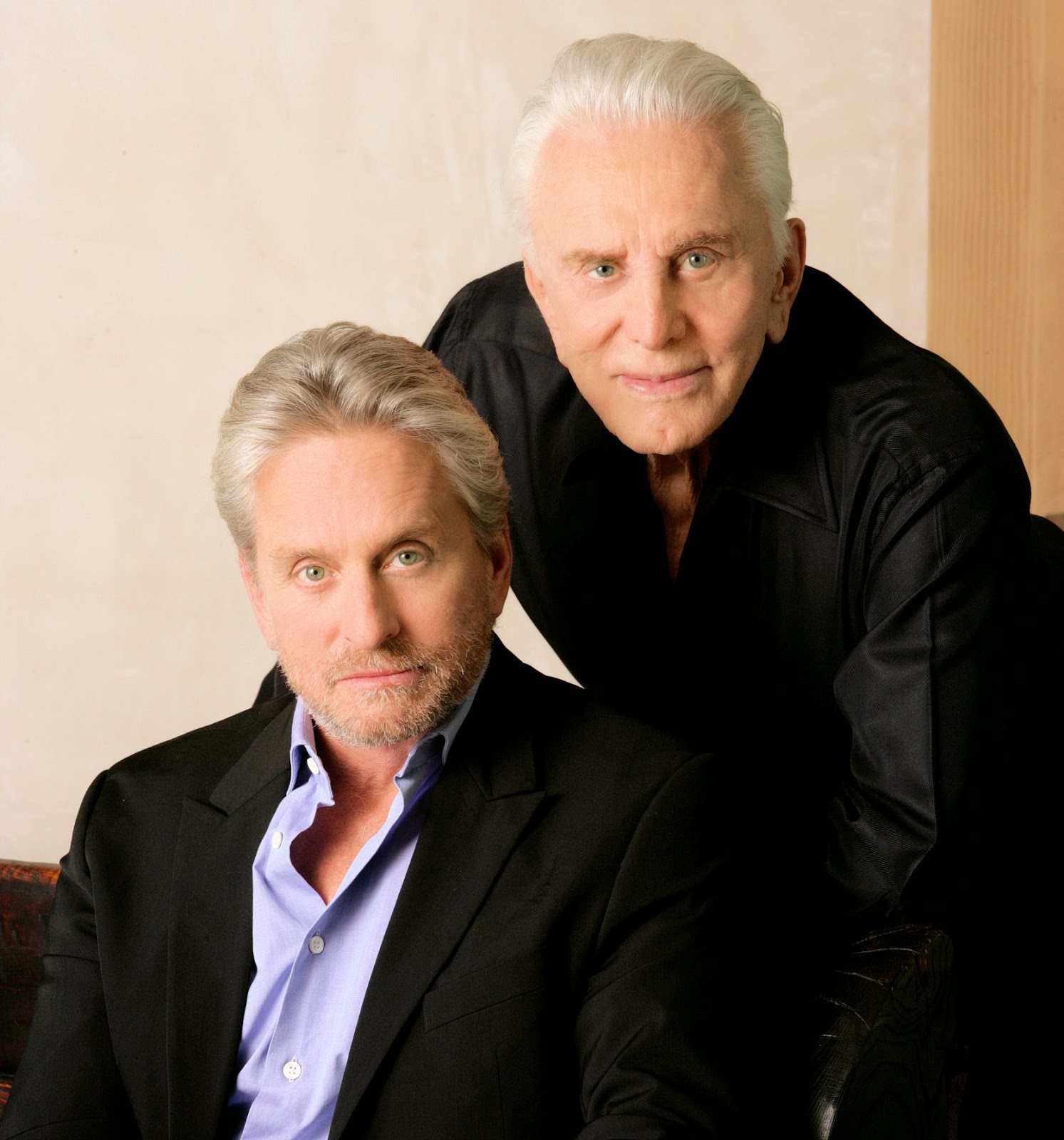 I asked him about his Oscar-winning actor/producer son, Michael Douglas.  Michael won a Best Actor Oscar for Wall Street.  He had a huge hit with Fatal Attraction.  He did not have such a huge hit with the film version of A Chorus Line.  We talked about that and about female co-stars from Kirk's golden days in Hollywood.  Here's a clip:
Here's his new book. 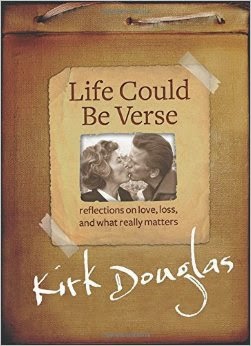 I hope it becomes a best seller.  Love me some Kirk Douglas!

By the way, one of his non-home run movies has become somewhat of a guilty pleasure for me.  The 1979 comedy western, The Villain -- also called Cactus Jack -- is basically a long live-action version of a Chuck Jones or Tex Avery cartoon.  Kirk Douglas' Cactus Jack character has a touch of the Yosemite Sam about him.   This Kirk Douglas western is such a prairie dog of a movie that it was stolen by Paul Lynde -- on a horse -- as an Indian chief called Nervous Elk.