I really dig that groovy bear of an actor/filmmaker, Jon Favreau.  This summer, he gave a little indie comedy that got glowing comments whenever I heard a critic or an ordinary moviegoer talk about it.  I saw Chef, directed by and starring Jon Favreau.  I've joined the chorus singing its praises.  What a sweet little movie!  Chef is entertaining, wise, heartfelt and funny.  The food scenes will definitely stimulate your tastebuds. 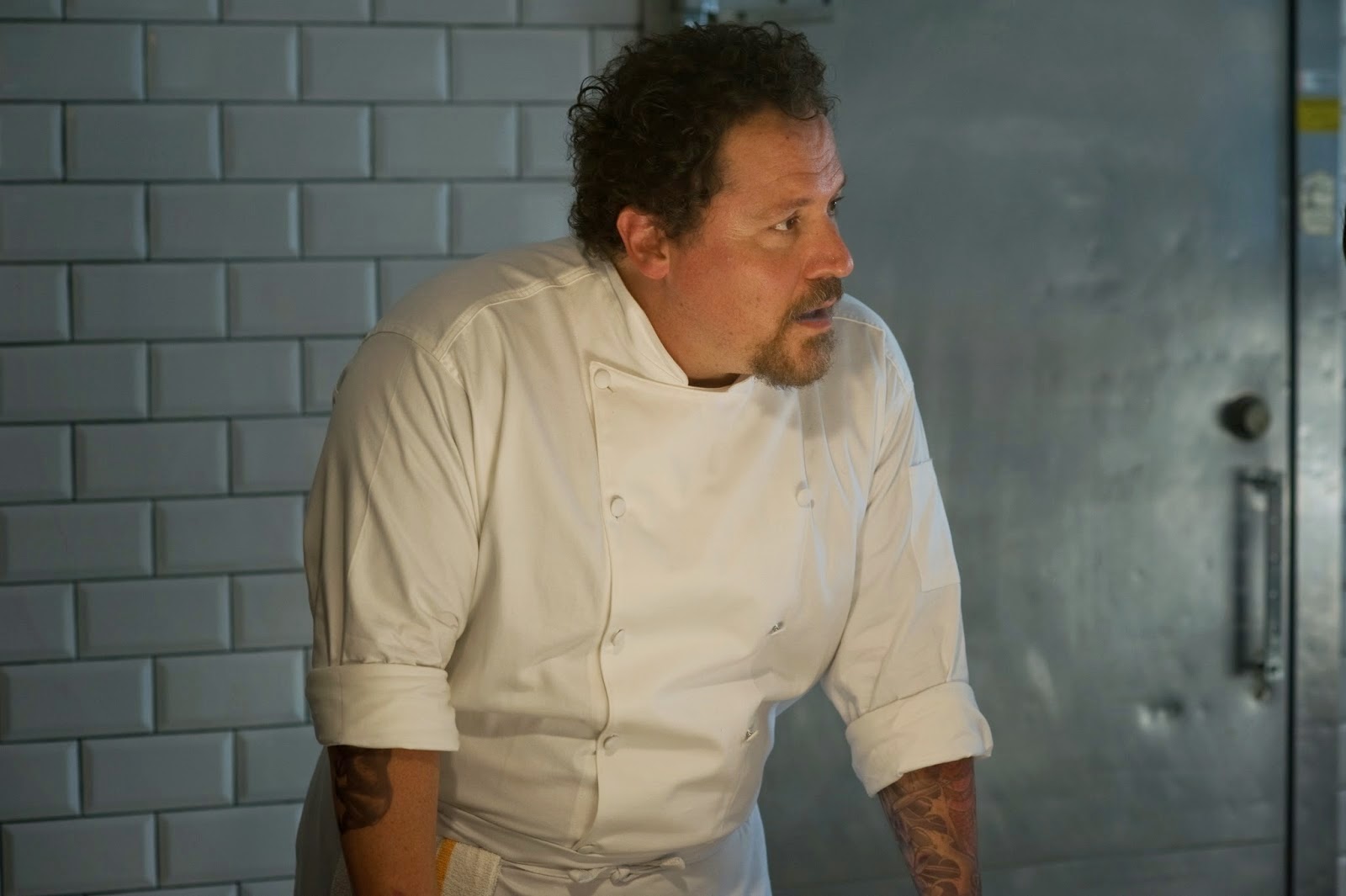 The top layer is about chef, a divorced dad, whose popular Los Angeles restaurant gets a bad review from a noted and very important critic.  The chef is devastated and fuming.  He and the critic engage in a war of words on Twitter that gets lots of publicity.   Chef Carl wants revenge.  His ego was charred, seared and sliced. 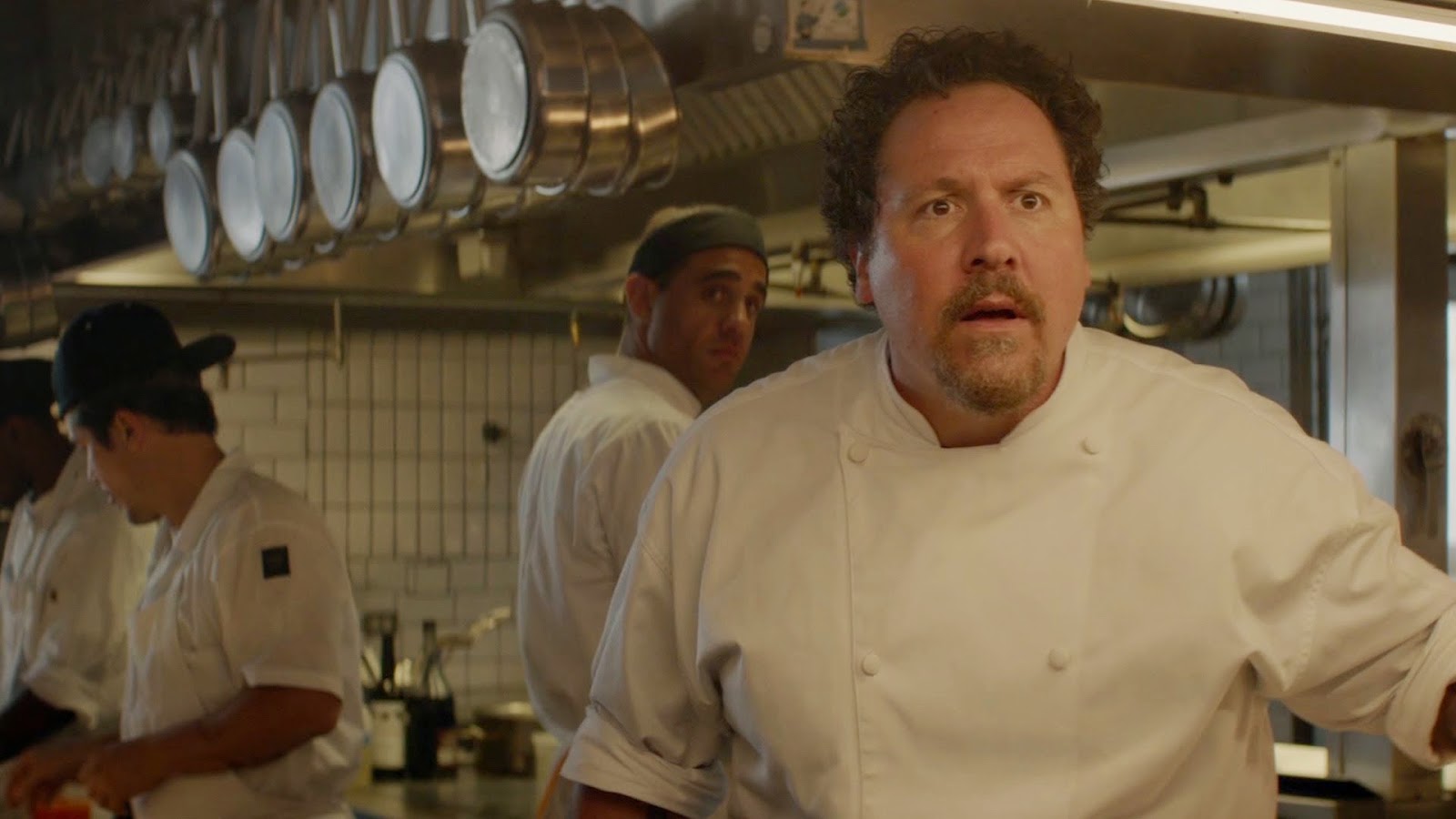 That's the top layer.  The creamy, tasty center of the movie is about reigniting your passion for your art, finding your voice again and making it even better.  Carl is a big sweet bear of a guy who loves to cook and loves to eat.  He savors foods.  He loves variety.  Food is art to him.  He loves the share his knowledge and enthusiasm. 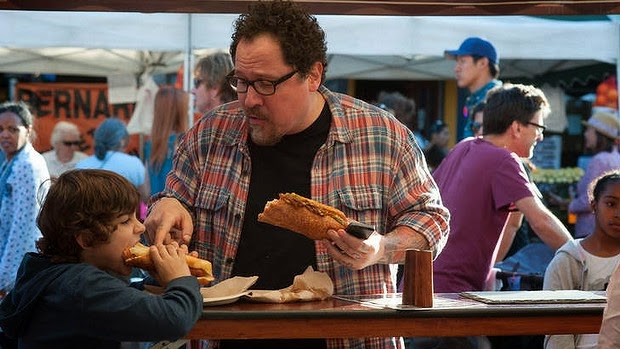 Along the way to creating a new menu, the chef will spend more time with his wonderful little boy.  He'll teach his kid the business.  His kid wants to learn the business.  And the chef will be reminded that one of his wisest and most supportive friends is his vivacious ex-wife, played by Sofia Vergara of TV's Modern Family. 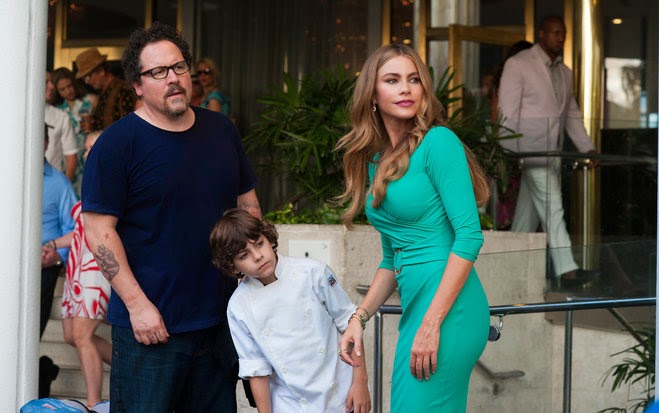 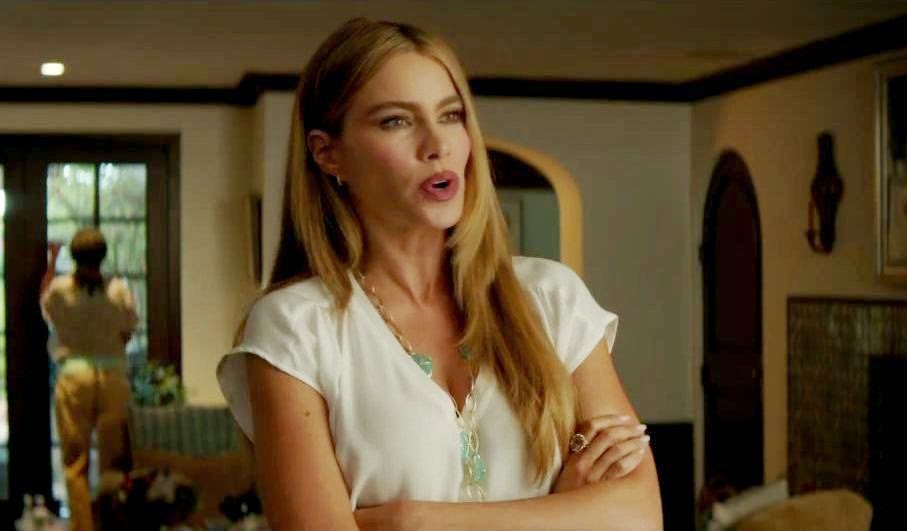 She knows his talent for making Cuban food.  He makes it better than some restaurants she went to in the Little Havana section of Miami when she was girl.  She gently coaxes him to step out of his restaurant food rut, embrace his passion for Cuban cooking and take his food act on the road.  In a food truck. In Miami.  It's in the food truck that he'll rediscover his joy of cooking and joy of fatherhood. 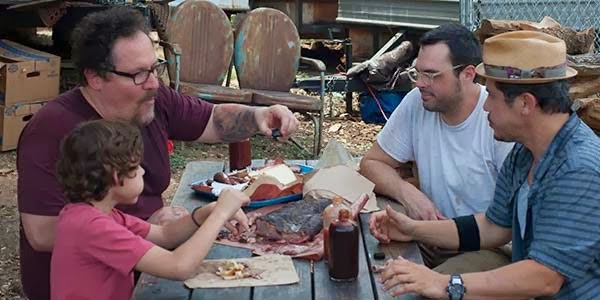 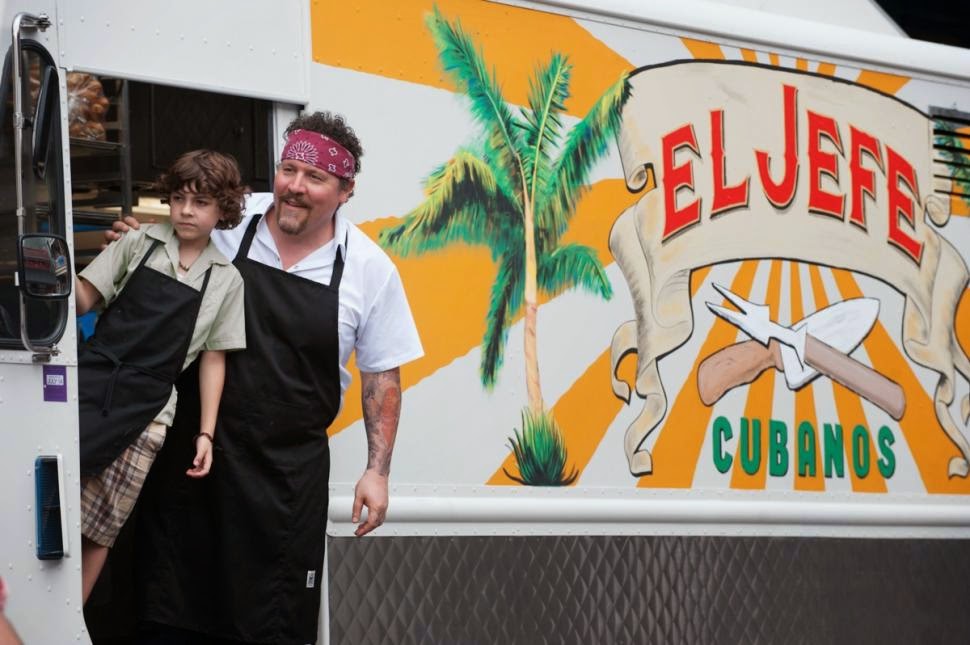 Dustin Hoffman stars as the chef's conservative boss, a man who is a brick wall the chef crashes into when he wants to vary his menu and try something new.  Following the boss' orders and sticking with the old, popular menu brought about the harsh review.  John Leguizamo and Bobby Cannavale play experienced cooks in the kitchen.  Oliver Platt takes on the food critic role. 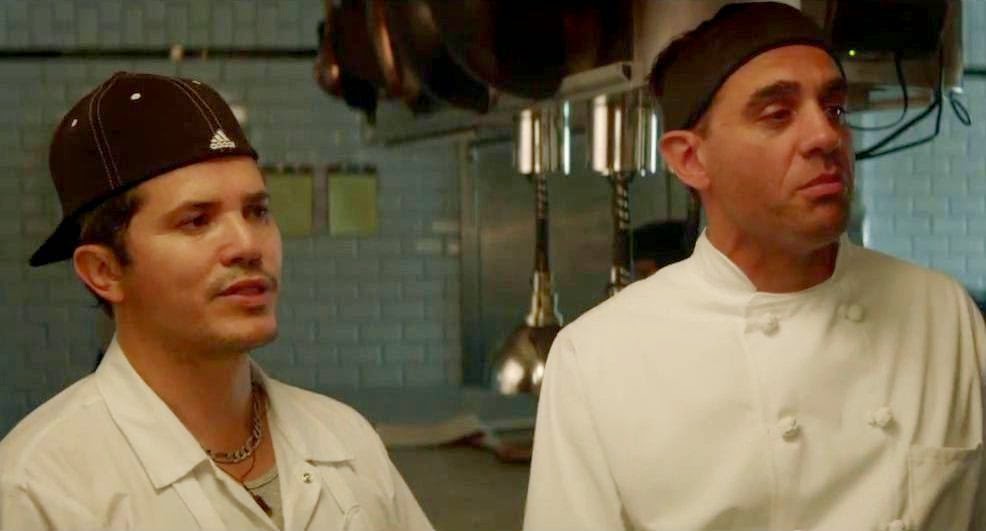 In one scene, the chef charges into the restaurant's dining area and verbally confronts the critic.  It's a loud  angry scene in which an artist accuses a negative critic of not knowing how hard it is to be consistently good and original as an artist in a marketplace populated with corporate bosses who demand that you give them the same thing over and over again.  His restaurant boss stifles creativity. 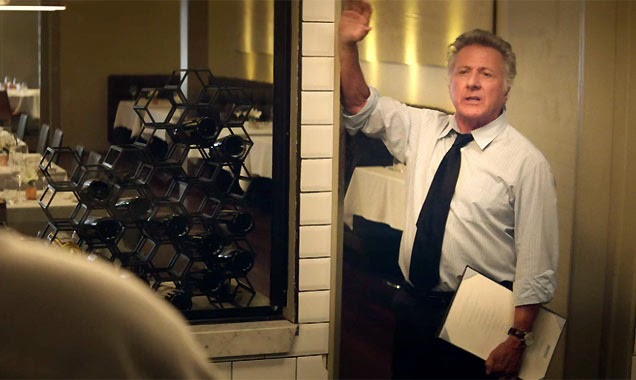 I felt Favreau was really shouting at movie critics.  And he had a point.  It's much harder to make a film than it is to watch and review one.  Some critics do seem to be snarky for the sake of making themselves appear clever or they seem to be writing to impress fellow critics.  A true love for the art doesn't read through.  You wonder if they'd still be film critics if they had to pay to see the movies, stand in line for tickets like everybody else and did not get reimbursed for the money they spent on tickets.  I'll use two old Hollywood movies as examples.  The chef is like Tony Hunter, the character Fred Astaire played in the musical comedy classic, Vincente Minnelli's The Band Wagon.  He's stuck to the same act.  He needs to reinvent himself and find new stardom.  The food critic is like the Broadway critic David Niven played in the comedy, Please Don't Eat the Daisies.  He's fallen in love with the power of his own witty barbs and wisecracks. 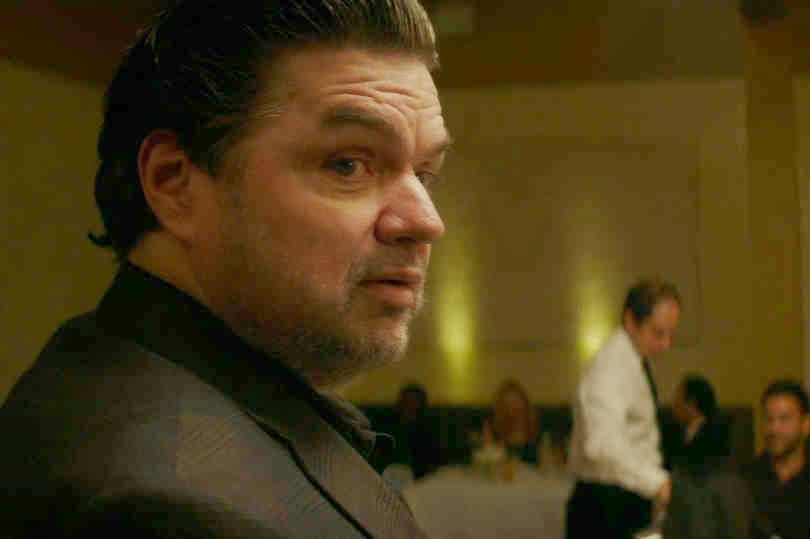 After the bad review and the conflict with the L.A. restaurant boss, Chef  becomes a road movie in a food truck.  Road movies are about discovery -- discovery of one's self and learning things about others traveling with you and sharing your adventures on the road.  This is one marvelous road trip for a father son.

My parents divorced when I was on the brink of starting high school.  I loved how Favreau, who also wrote Chef, showed that two people can be divorced and remain friends.  That provides such a positive and healthy emotional environment for a child.  It also shows great respect for the child's feelings in what could be a very disconcerting period in a youngster's life.  I wished my parents had been that friendly after their divorce.  It's a bit surreal when one parent is no longer in the house and gets to visit with you only on weekends.  Trust me on that.

Chef is very good, a most satisfying and tasty comedy.  Plus it has the most inspired use of cornstarch I've ever seen in a film that focuses on food.

Check out Favreau's film.  Good cast. Good story.  Good characters.  Good eats.  It's a winner.   I think you'll like it. 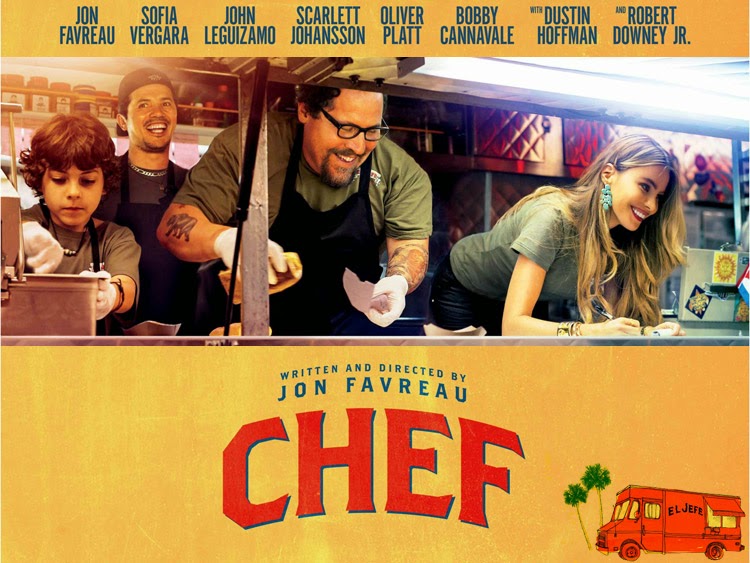