I just saw an absolutely beautiful film and I enthusiastically suggest that you see it too. The film is called MINARI and much, but not all, of it is subtitled. It's not a foreign film. It's an American film about a Korean-American family that has relocated to a rural section of Arkansas. MINARI, written and directed by Korean-American Yale graduate Lee Isaac Chung, make me think of Vincente Minnelli's classic musical, MEET ME IN ST. LOUIS, starring Judy Garland. 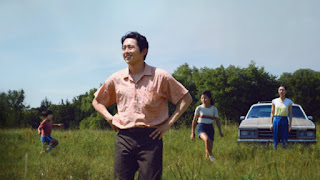 "Don't run, David!" is what he constantly hear Jacob and Monica Yi shout to their little boy. He has heart murmur and need occasional medical visits. Jacob has relocated his wife and two kids to the Ozarks where he plans to be a vegetable farmer and sell his produce to local markets. Monica is more of a city girl. They were in California, then Seattle and now rural Arkansas. She'd prefer a city with "a big mall and a good school" for the kids. The action takes place during the Ronald Reagan administration. Jacob has his farm and hires a guy to help. The guy is a polite and harmless, yet he's a serious Jesus freak. There are no nearby neighbors and the only contact with other Korean-American that Jacob and Monica have is at work. They work in a chick hatchery. Monica's Korean mother comes to live with them. At first, David does not like her because she's not like a real grandmother. She's not Americanized. David is an American boy who likes pasta and Mountain Dew. Grandma doesn't bake cookies or anything else. She makes an old Korean broth and says "It has everything. Even deer antlers." Her identity is fully and solely Korean.  It's Grandma who, during a walk in the woods. introduces to the minari plant. She tells him that it can grow anywhere.
MINARI is a tale of assimilation. The Yi family has to assimilate into predominantly Caucasian Arkansas territory. They're the only minority family at the local church. Grandma has to assimilate into her Korean-American family. While Jacob is driven to pursue his American Dream, Monica is unhappy in the country and guilty that she hadn't paid more attention to her mother. David wants to make a friend. His big sister seems a bit weary at always being the dependable, helpful older child. However, after all their setbacks, disappointments and heartbreaks, they all come to realize that the most important thing is not relocating to purse the American Dream, it's being together as a family that really counts -- just like the Smith Family in MEET ME IN ST. LOUIS. More importantly, the Yi family will prove to be like the qualities of the minari plant.
\ 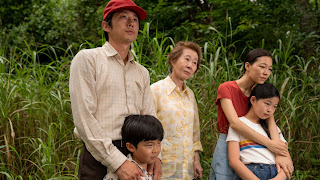 MINARI is blessed excellent performances. There's Steven Yeun from the WALKING DEAD television series as Jacob, Han Ye-ri as Monica, Noel Kate Cho as Anne, the oldest child, and Alan Kim as David. He is the most adorable child actor to hit the big screen in some time. Youn Yuh-jung is Best Supporting Actress Oscar nominee material for her performance as the grandmother.. Will Patton, whom I remember opposite Kevin Costner in the 1987 mystery thriller NO WAY OUT, plays the Jesus-loving farm aid. Here's a trailer.
It's a simply told yet powerful American story with layers of depth and relevance. This semi-autobiographical film from director/writer Lee Isaac Chung is wonderful and worth your time.  Brad Pitt is executive producer. MINARI opens theatrically on February 12. It's available on video-on-demand February 26. The film has received great reviews from ENTERTAINT WEEKLY, VANITY FAIR, ASSOCIATED PRESS, ROGEREBERT.COM and INDIE WIRE. The Black Film Critics Circle picked it as one of the Top 10 Films of 2020.