Movies You May Have Missed 2

I'm back again with film suggestions for you viewing pleasure. These are movies you may have missed during their theatrical releases. This first one is a must-see for Michael Keaton fans. He gives one of his strongest performances as the man who made Big Macs popular. 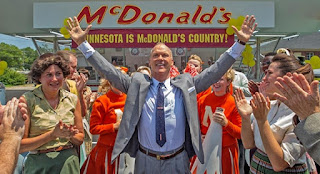 Michael Keaton is at his dramatic best in THE FOUNDER (2016). He plays Ray Kroc, the struggling Southern California salesman who became one of America's most successful businessmen as head of the McDonald's corporation. Back in the 70s and 80s, Kroc was in the spotlight a lot as an American success story, a man who gave us an All-American product -- the hamburger with fries. But the story of how a guy with the last name "Kroc" gave us a franchise called "McDonald's" was always vague if not ignored completely. Why weren't we eating a "Big Kroc" instead of "Big Mac"?  Well, the business started in Southern California with a burger stand owned by two men -- the McDonald Brothers. Ray is in his early 50s and not having much on the road selling milk shake machines. When Ray hits the burger stand, he notices all the teens hanging out having burgers and shakes. Ray may not be a success as a milk shake machine salesman, but he's persistent. He's quick to seize upon any opportunity that can make his dreams bigger/ The McDonald Brothers are polite, conservative men. Ray tells them to franchise. He has a vision. It's a vision they don't share. Ray is ambitious and has ideas that we like. We start to see the dark side of persistence in pursuing the American Dream. He will make his vision, his dream come true. Even if he has to be ruthless. This look inside burgers and buns is also a cautionary tale. 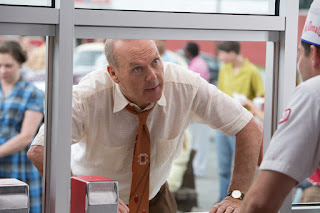 Directed by John Lee Hancock (THE BLIND SIDE and SAVING MR. BANKS) with an intelligent screenplay by Robert Siegel, THE FOUNDER boasts several good performance. The cast includes Laura Dern, Nick Offerman and John Carroll Lynch. Here's a trailer.
THE FOUNDER can be seen on Netflix.
Full frontal nudity and show tunes. As Gershwin wrote, "Who could ask for anything more?" Olivia Colman won the Best Actress Oscar for her fierce dramatic performance as sickly, 18th Century Queen Anne in THE FAVOURITE (2018). She followed that by playing another queen, Queen Elizabeth II, in the dramatic series, THE CROWN. Did you know that before those dramatic royal roles, she got a lot of laughs on British TV sitcoms? She coupled with one of her fellow sitcom actors, Robert Webb of PEEP SHOW, in the Fox Searchlight mockumentary comedy, CONFETTI (2006). This is not a highbrow comedy but it is entertaining. CONFETTI was directed and conceived by Debbie Isitt.
The mockumentary follows three couple in a contest to win the high-profile "Most Original Wedding of the Year" competition. Martin Freeman, also a British sitcom veteran, is half of the couple that loves show tunes. Olivia Colman and Robert Webb play the nudist couple. I saw this comedy at a cineplex. On the big screen, Webb's testicles looked to be the size of Texas watermelons. Click onto the link below to see a CONFETTI trailer:
https://youtu.be/i2egth4DI5o.
CONFETTI can be streamed on Amazon Prime.
CLEMENCY is one of the many fine, recent films from a woman director. Alfre Woodard is the star of this indie feature. Woodard is in the group of several good Black actresses who received an Oscar nomination and then had to turn to TV for steady employment. Hollywood did not stuff her mailbox with other good script opportunities after her Oscar nomination. Her Best Supporting Actress nomination came for 1983's CROSS CREEK. CLEMENCY did not receive nearly the amount of press attention it deserved when it opened in 2019. Alfre Woodard should have been a Best Actress Oscar nominee for her performance in CLEMENCY. She plays a woman dealing with the bruises sustained on an emotional rollercoaster ride. She's a prison warden dealing with another upcoming execution. The job, with its executions, begin to scar her psychologically and emotionally. The job affects her marriage. Wendell Pierce stars as the warden's husband. There's a strong supporting performance from Vernee Watson, currently a regular on the CBS sitcom BOB 💓 ABISHOLA. Aldis Hodge, who delivers a touchdown performance as NFL star Jim Brown in ONE NIGHT IN MIAMI from director Regina King, plays the convict whose execution the warden must oversee. Here's a trailer.
CLEMENCY was written and directed by Chinonye Chukwu. You can stream it on Amazon Prime.
To me, the word "iconic" is overused today. It's attached to some things that are popular but not really iconic. The classic sitcom, I LOVE LUCY and Lucille Ball's performance as Lucy Ricardo truly were iconic. After 15 years in Hollywood movies, TV made her a bigger and richer star than movies had. In recent entertainment news, there was the reported item that Nicole Kidman and Javier Bardem are under consideration to play Lucille Ball and Desi Arnaz in a dramatic feature about their marriage from screenwriter Aaron Sorkin.

In her post-1940s lifetime, Lucille Ball was called "The Queen of Comedy." When I was a baby boomer kid, it was noted that I LOVE LUCY reruns aired every hour of the day somewhere in the world. For as much as she made me laugh -- and she made me laugh a lot -- my favorite Lucille Ball movie is a drama. It's a 1942 drama called THE BIG STREET. Lucy stars opposite Henry Fonda in a movie based on a short story by Damon Runyon. There's at least one character in this feature who reappears in the Broadway musical, GUYS AND DOLLS, also based on the writings of Damon Runyon.
In THE BIG STREET, Lucille Ball plays a lovely but bitter and hard-boiled Manhattan nightclub singer. She really becomes a bitch on wheels. Life's not been easy for her and she's the kind of dame who plans to marry for money instead of love. She's seen how love can be disappointing. She winds up crippled and broke and friendless. The only one who comes to her aid is a nightclub busboy (Fonda). Like Ratso Rizzo in MIDNIGHT COWBOY, she's broken physically and emotionally and wants to get to Florida from New York City. THE BIG STREET proved that Lucille Ball could lock into a serious character, get raw and real. Her bitterness and vulnerability are believable. Her last scene puts tears in my eyes every time. Here's a trailer.
THE BIG STREET can be streamed on YouTube and Amazon Prime. I hope you enjoy the movies.