Earlier this month in my VIVA FRAN LEBOWITZ post, I wrote how much I loved the first episode of her PRETEND IT'S a CITY documentary/interview production with interviewer Martin Scorsese currently on Netflix. This weekend, I went back for Episode 2 and Episode 3. I loved them too and laughed a lot. 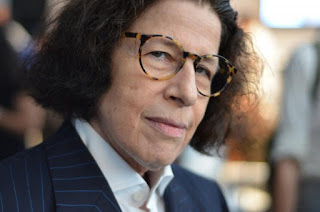 I've been a Fran Lebowitz since the late 70s when I read her METROPOLITAN LIFE followed by SOCIAL STUDIES. I've had dinner with her. She was a guest on my old VH1 talk show in the late 80s. One of the things I love about her is that she's whip-smart without being pompous. She makes sense and doesn't follow trends. She's a down-to-earth intellectual who has something to say. The second episode is "Cultural Affairs" and she has some razor sharp comments about art and artists. Do people today have the discipline and focus to become artists? In her youth, she wanted a cello. But she had to realize she didn't have the talent to be a cellist. She would not become an artist by playing the cello.

We see Fran, in clips, being interviewed by Alec Baldwin and Spike Lee. We see Fran interviewing one of the best friends, the late literary artist Toni Morrison. Fran uses author Edith Wharton to make further points about artist to Martin Scorsese. Scorsese directed an adaptation of Wharton's THE AGE OF INNOCENCE. This is probably the only documentary/interview episode that goes from talk about Edith Wharton to clips of Marvin Gaye. Fran Lebowitz is a Motown and jazz fan. Her story about her friendship with volatile jazz great Charlie Mingus is priceless. So is her comment on art versus profit after the auction of a Picasso painting.

In my VIVA FRAN LEBOWITZ post, I wrote that she was one a New York City cabdriver. She talks about that job experience in Episode 3, "Metropolitan Transit." In this episode, she accurately and with great humor skewers the NY subway system. There's footage of her in subway stations. One of my stop of 20 years -- the 23rd Street at 7th Avenue station. I lived on the corner of 21st Street at 7th Avenue.

About her being a cabdriver, one interviewer who asked her about that is Toronto's late, great TV interviewer, Brian Linehan. Scorsese picks up the topic and Fran cites a wild cab ride Griffin Dunne takes in Scorsese's 1985 dark comedy, AFTER HOURS, as being on-the-money. I had a cab ride like that with married friends visiting NYC from Baltimore in the late 80s. I lied to our speeding cab driver, "Slow down! She's pregnant!" It worked. He slowed down.

About the subways: If, before the pandemic, I could've written for whatever travel guides go overseas, I would've advised foreigner "Do NOT visit New York City on the weekends. Some subway trains will be out of service, others will skip scheduled stops and the city has removed many token booths with employees who could give you directions." Instead of fixing all that and more, some stations were closed for...remodeling. Art work was installed on the walls. I kid you not. Fran has funny verbal fire for the subway system.

She is never at a loss for words. And we are lucky for that. Go to Netflix and enjoy.