This is a new foreign film that, at the end, made me say "Wow." It's foreign, but not subtitled. The story takes place in modern-day Dublin, Ireland. Considering the homes and city locations you see in the film, Dublin resembles Los Angeles or San Francisco. Dublin is sophisticated and contemporary. There are Black people in Dublin. The film is called HERSELF and it was directed by Phyllida Lloyd. She directed the musical MAMMA MIA! starring Meryl Streep. That was a huge international money-maker. Then Lloyd directed Streep to a Best Actress Oscar victory for THE IRON LADY in which the star played Prime Minister Margaret Thatcher. I liked both movies. However, of the three, HERSELF is now my favorite. The production is from Amazon Studios and the actors are not known here in the States. But you'll remember some names after you see it -- especially the name of the stunning lead actress. 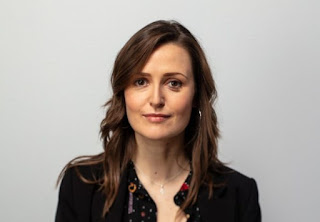 Clare Dunne plays Sandra. Sandra lives in a nice suburban home. She's a playful, devoted mother with two smart, dependable, lovable little girls. But Sandra has an abusive husband who beats her and leaves her with an injured hand. It was injured when she was on the floor and he forcefully stepped on it. She takes the girls and gets out of that marriage. It's on court records that the husband beat her. Sandra now works as a cleaner to provide for the girls. She cleans the home of a female doctor who had a hip injury that caused mobility issues. Sandra also cleans a pub. When she takes the girls to see their dad on weekends, he pulls Sandra aside one day and says "I'm seeing a counselor." Nevertheless, he's still verbally abusive. Sandra misses him -- not the abusive man, but the man he was before he went dark. She's still determined to raise the girls on her own but society doesn't exactly help the physically abused woman who is now a responsible yet financially struggling single mother. She cannot find decent housing. The social system works against her. The abusive ex-husband still has a comfortable home.

Then Sandra sees an online ad for a certain architectural opportunity that grabs her interest. Sandra declares, "I want to build a house."

She does. With the help of the doctor whose home she cleans. As Sandra builds the little house and goes up against a social system that constantly tells her "No," she is rebuilding herself. The powerful, passionate Claire Dunne performance got the "Wow" from me at the end. She's outstanding as the resilient Sandra. I also loved the performance from Harriet Walter as the supportive doctor. Here's a trailer.

HERSELF is a very good film, Phyllida Lloyd's best film to date. Check it out on Amazon Prime. 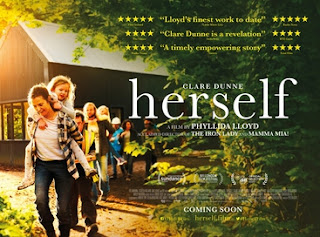