3 Oscar Winners in THE LITTLE THINGS

This is a tense murder mystery set in 1990 Southern California when folks still used rotary phones. The cast is headed by three Oscar-winning stars. There's Denzel Washington (Best Supporting Actor for GLORY, Best Actor for TRAINING DAY), Rami Malek (Best Actor for BOHEMIAN RHAPSODY) and Jared Leto (Best Supporting Actor for DALLAS BUYERS CLUB). From a publicity standpoint, that would give their new film a certain cachet. THE LITTLE THINGS is a good, not great, serial murder mystery that could provide some fine Saturday night at the movies entertainment. Most of its goodness comes from the performances of the three stars. Just like the title, it's the little things in Denzel Washington's creation of his character that are so expert. He plays Joe "Deke" Deacon. Now a sheriff in Bakersfield, he's called into duty in Los Angeles because a case he worked on could help solve a series of murders in L.A. Washington has a close-cropped haircut, he lets the gray show, he's thicker around the middle which is perfect for Deacon's character considering his marital and health history. He puts a lot of sugar in his coffee. He hasn't been working in a California location where folks are as much into physical fitness as in L.A. 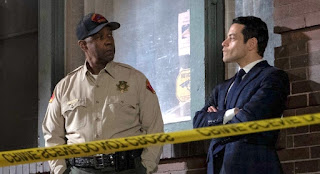 When he gets to L.A., he encounters cops on the force who know him. Apparently, he worked in L.A. years before he got booted down to Bakersfield. His LAPD replacement, with whom he has to work, is a young, assertive guy with a healthy ego named Jim Baxter, played by Rami Malek. It takes a while to relax into Malek playing this L.A. character because he seems oddly cast. This would've been a good role for Chris Meloni. But we've seen him as a cop for years on TV. I would've also considered Mark Ruffalo, Esai Morales and Lou Diamond Phillips for the role. However, with his large, expressive eyes that lean on you dramatically and his acting skills, Malek brings his best to the role. Jared Leto, as a scraggly-haired and creepily smart guy, seems to be a suspect. Leto nails the role. 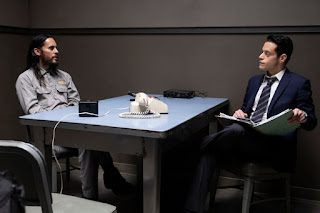 There's a color motif to Washington's character. In L.A., he's in a seedy green hotel and he's given green lighting one night as he lies on the bed gazing at police photos of the serial killer's young female victims. In a morgue scene, you see classic Washington acting as he talks to the corpse. There's regret at the unsolved crime and there's heartbreak behind his eyes. Personal heartbreak and self-anger. You get the feeling that solving this crime will be a redemption for him. He's talking to the corpse of Julie. He says "Life is too short, Julie." The green lighting in that cheap hotel room reminded me of a scene in Hitchcock's VERTIGO with Kim Novak and James Stewart. 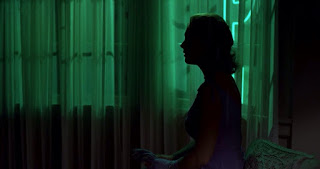 If you're familiar with the famed Hitchcock "MacGuffins," finding out who the killer is seems to be a MacGuffin in THE LITTLE THINGS. Early in the film, there's a flashback. We see Deke in a suit in L.A. as a detective on a murder scene. There are three dead women. But we met him in Bakersfield wearing a sheriff's outfit. What happened? As Jim Baxter says to him, "What is it your looking for in all of this?" Is he, indeed, seeking a redemption for something? One L.A. cop who welcomes him back later comments "Deke's got his own style." He does. He notices everything on a crime scene -- some things overlooked by others.

THE LITTLE THINGS is good but not great, as I wrote earlier. It's not a classic like THE SILENCE OF THE LAMBS. The ending is not as satisfying as that in THE SILENCE OF THE LAMBS or as well-developed script-wise as ZODIAC or SE7EN or even VERTIGO. The director and screenwriter of THE LITTLE THINGS is John Lee Hancock who also gave us THE BLIND SIDE. Nonetheless, the acting in this thriller does not disappoint.

THE LITTLE THINGS opens January 29th.
After you see THE LITTLE THINGS, watch the sweet 2011 romance comedy/drama LARRY CROWNE. Tom Hanks starred as a middle-aged company man suddenly down-sized. He's unemployed and broke. He decides to enroll in community college classes to learn new things and reinvent himself for the job market. He's single. Julia Roberts plays one of his teachers. She's recently divorced. Romance will ensue. In a small role with those two Oscar winners as one of the fellow students in Larry Crowne's class is a then-unknown young actor named Rami Malek. That was 2011. In 2018, Rami would play the late rock music great, Freddie Mercury, and he too would become an Oscar winner.