Film great Charlie Chaplin adored her. How's that for a compliment? She was a good actress, a good singer and an extraordinary dancer who had more than one Tony Award in her possession for her Broadway artistry. She was the Southern California-born Gwen Verdon. While most of the film lovers on Twitter seemed to pounce on the Netflix arrival of MANK and follow their viewing of it with arid, overlong essays on its narrative structure, I went over to Amazon to watch a fascinating documentary about Verdon entitled MERELY MARVELOUS: THE DANCING GENIUS OF GWEN VERDON. I was captivated for the entire 1 hour and 22 minutes. Not only was she a terrific dancer, she was a great mother, a great friend and a real mensch. 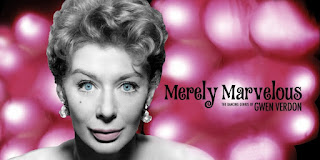 She grew up in Culver City, California where she became enamored with dance when she saw Fred Astaire in one of his classic RKO musicals with Ginger Rogers. This happened when she was in the 4th grade. Verdon overcame a case of rickets. Her family was, by no means, well-off, and she married when she was underaged. Her husband, about 20 years her senior, spiraled into alcoholism. The marriage ended and she was a single, working mother. Her son, by her first marriage, is one of the folks interviewed in the documentary. By the time I was in the 4th grade in South Central Los Angeles, I was also enamored with dance when I saw Fred Astaire in classic RKO musicals. But my parents wouldn't let me take dance classes. They wanted me to engage in more traditional "boy's stuff" -- like camping. Dance classes were for girls. I didn't want to go to camp and said "No," but they kept urging me to go to summer camp when I was on the brink of 4th grade. I submitted to their wishes, went to summer camp in the San Bernardino mountains for eight days and experience proved to be nearly-fatal. I wanted to stay home where I could see the Fred Astaire RKO musicals that aired every Friday night in early prime time of KHJ TV/local Channel 9. It was an independent station then. Today, it's KCAL TV owned by CBS. It was on that very station where I also discovered the dancing genius of Gwen Verdon. DAMN YANKEES, starring Gwen Verdon and Tab Hunter, was a favorite of Channel 9's MILLION DOLLAR MOVIE line-up. When programmed, it would air every weeknight at the same time then air twice on Saturdays. It aired so frequently, that I could sing all of "Whatever Lola Wants" at recess when I was in the 5th grade. The documentary opens with Verdon as Lola, recreating her Broadway triumph in the Warner Bros. film version. 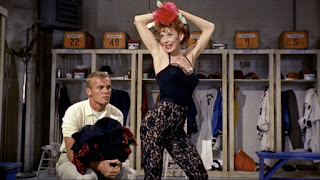 If you saw FOSSE/VERDON, the recent TV mini-series with Sam Rockwell and Michelle Williams as Bob Fosse and Gwen Verdon, you should see this documentary. The brilliance of Verdon's input during her professional and marital relationship with Fosse is touched upon in the TV biopic, but it's really fleshed out in the documentary. Verdon was a visionary who would've made a great director.  Early in her career, she landed work as an assistant to top choreographer Jack Cole. This was in Hollywood. Jack Cole choreographed Rita Hayworth's famous glove strip to "Put the Blame on Mame" number in GILDA (1946) and Marilyn Monroe's famous "Diamonds Are a Girl's Best Friend" number in GENTLEMAN PREFER BLONDES (1953). For the latter, Verdon was Monroe's dance coach. Michelle Williams played both Monroe and Verdon in biopics. Even though she was not credited, Verdon's dancing was so awesome and unique that she stood out in movie musical numbers in which she was a chorus dancer. This was in her 1950s Hollywood phase. You saw her dance with the generous Betty Grable in Fox's THE FARMER TAKES A WIFE and Fox's ON THE RIVIERA with Danny Kaye. Not only did Verdon study dance, she studied anatomy to see what the dancer's body could do.

To make money to raise her first kid, she got work in nightclubs before booking the Hollywood studio work with Jack Cole. She studied how nightclub entertainers moved. She also went to burlesque joints to study how the strippers moved. All this information would serve her well later on Broadway.

I was told once by a reliable source that, had he lived, Bob Fosse was very interested in directing a new film version of GYPSY starring Liza Minnelli. He felt that the first version, starring Rosalind Russell, was too "candy box" in its look and tone. He wanted to bring out more of the story's emotional darkness and the drama that was evident in the play. Minnelli was keen on doing this. As a teen, Fosse had done dance numbers in between strip acts at a burlesque joint. Verdon has studied strippers in performance. I bet that, together, they could have delivered one helluva gritty remake of GYPSY. 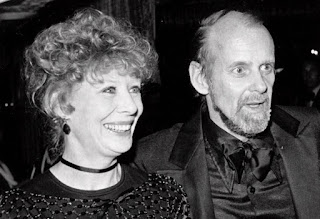 MERELY MARVELOUS: THE DANCING GENIUS OF GWEN VERDON has footage of Verdon on Broadway and on TV that you will love. In a dance number from her musical called REDHEAD, you will see why Chaplin adored her and went backstage to meet her. As a visionary, the proof of that comes in Fosse's CHICAGO, the Broadway musical that became a bigger hit in a revival that led to a film version that took the Oscar for Best Picture. During the Watergate hearings which revealed President Nixon's corruption, Verdon felt that CHICAGO -- a play about crime, political corruption and fame -- would be ripe for a musical version. CHICAGO was made into a silent film and then a 1942 comedy called ROXIE HART starring Ginger Rogers. In the documentary, Verdon talks about her idea in an archive interview.

Verdon's loving daughter, Nicole Fosse, speaks on camera as do Chita Rivera, songwriter John Kander, actor Tab Hunter and others who loved and worked with Gwen Verdon. Another one of those people is Harvey Evans. Harvey danced in the original Broadway production of WEST SIDE STORY and he's one of the Jets in the Oscar-winning 1961 film version. That's Harvey in the lower right-hand corner.

Gwen Verdon was a major Broadway star -- from DAMN YANKEES to SWEET CHARITY to CHICAGO. With all the skill, success and fame, the story of her carpooling during a New York blizzard, something we find out in the last 10 minutes of the documentary, really makes you gasp "Wow. I wish I had known Gwen Verdon. She was marvelous off-stage as well." Here's a trailer for MERELY MARVELOUS: THE DANCING GENIUS OF GWEN VERDON.