About JINGLE JANGLE: A CHRISTMAS JOURNEY

This original musical fantasy is on Netflix. JINGLE JANGLE: A CHRISTMAS JOURNEY is like 10 pounds of candy canes and Christmas cookies stuffed into a 5 pound sack. It's overproduced -- and I loved every single minute of it. When I was a kid, you really didn't see Black characters in Christmas stories presented on TV during the holiday season. You saw Black artists in the holiday music variety specials but rarely in Christmas stories. For instance, back in the 70s and 80s, no one would've thought of casting big, brawny, barrel-chested James Earl Jones as the Ghost of Christmas Present in a TV production of A CHRISTMAS CAROL. He'd have been perfect for that part. Well, this Netflix feature definitely changes that. JINGLE JANGLE: A CHRISTMAS JOURNEY is unabashedly, unapologetically, joyfully Black. Three of its stars are Keegan-Michael Key, Anika Noni Rose and Best Actor Oscar winner Forest Whitaker -- and they all sing. Yes, Forest Whitaker has a sweet singing voice as you'll hear in three numbers. 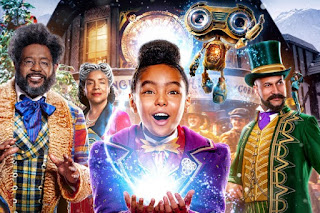 Whitaker is the lead character. The story starts in modern day with Phylicia Rashad, at her loveliest, reading a Christmas story to little children. It's the story of the chipper toymaker and inventor Jeronicus Jangle who owned his own shop in the Victorian era. There's sort of a toymaker ALL ABOUT EVE element in the story. The good-hearted Jeronicus has an apprentice. The apprentice steals Jeronicus' book of inventions and one of the toymaker's most important dolls. Fast forward 30 years and we see the broke and broken Jeronicus (Forest Whitaker) who has emotionally closed himself off from the world. He doesn't smile. He doesn't respond to the saucy flirts from a middle-aged widow. This will all change when the sad inventor's whiz of a granddaughter comes into his life and brings light back into his heart and reignites his sense of invention. 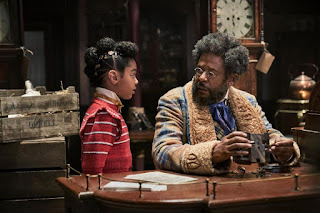 This feature is beautifully photographed and very well cast. I loved how the costumes blended Victorian era fashions with African/Black American style details. The choreography is energetic and fun as are the music numbers overall. The plot is nothing heavy. It's geared towards a happy ending. As I wrote earlier, this film is delightfully overproduced, but...let's face it. The Christmas season is not one in which we practice simplicity and Spartan behavior. It's about being big, colorful and fabulous. Christmas is a holiday in which over-production is the norm.
Little Madalen Mills as Journey, the Jangle grandchild, is a bright Christmas gift in herself. This little actress has shining star quality. She's wonderful in this film. Another gift is Lisa Davina Phillip as Ms. Johnson, the widow with a crush on the older Jeronicus. Her vamp number in his shop is a hilarious show-stopper.
We've watching Forest Whitaker every since he played one of the teen bad dudes in the 1982 comedy, FAST TIMES AT RIDGEMONT HIGH. In his real high school years, he performed in school musicals. He also studied in a conservatory. When his film career kicked in and he was booking work in serious films such as PLATOON, BIRD (in which he played jazz great Charlie Parker), CRYING GAME, PANIC ROOM and THE LAST KING OF SCOTLAND (his 2006 Best Actor Oscar-winning role as dictator Idi Amin), Whitaker put his musical talents on hold. It's great to see him take on a whimsical role and remind us of his musical skills.
We also get 12 inches of Ricky Martin. The singer is the speaking and singing voice of the foot-long devious Don Juan matador doll. I cannot recall Ricky Martin being as relaxed and funny in a performance as he is here. He is an absolute hoot as that vain, manipulative matador doll. 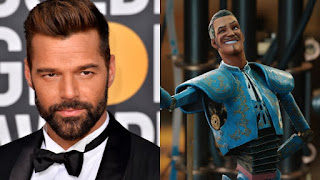 I wish JINGLE JANGLE: A CHRISTMAS JOURNEY was a TV feature that ABC, CBS or NBC would air annually for family viewing during the yuletide season. It's that charming an original Christmastime musical fantasy.
at December 28, 2020