One of the sweetest experiences I ever had at a movie screening in New York City involved actress Carey Mulligan. It was a screening for film critics and several of the city's oft-quoted and high-tone critics were present. The movie was AN EDUCATION, the 2009 romantic drama directed by Lone Scherfig. Within the first ten minutes of the movie, critics were leaning forward in their seats as if watching magic happen. In a way, they were. They were leaning forward, fascinated by the charismatic new actress they were seeing for the first time. The critic I sat next time, whispered to me "She's got an Audrey Hepburn quality." The actress was Carey Mulligan. Early the following year, Lone Scherfig would learn that she'd directed Mulligan to an Oscar nomination for Best Actress. Carey Mulligan was indeed a promising young woman -- and she has delivered on that promise. 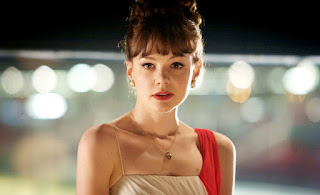 Her talent fascinates. Her range, her bold choices and her commitment to character. I feel the British-born Carey Mulligan should've received a second Oscar nomination for her performance in the excellent Depression-era Mississippi story, MUDBOUND (2017), directed by Dee Rees. One of Liza Minnelli's signature tune is "New York, New York" which she introduced in the 1977 Martin Scorsese movie of the same name. To see and hear a different and amazing jazz interpretation of that song, see Carey Mulligan as the needy Manhattan nightclub singer in Steve McQueen's SHAME (2011).

Carey Mulligan is again compelling in the new drama called PROMISING YOUNG WOMAN directed and written by Emerald Fennell. A Brit, like Mulligan, she makes her directorial debut in this tale of revenge and sexual assault. I loved Carey Mulligan's performance. I did not love the film. The story takes place in Southern California. Like a policewoman working as a decoy to nab muggers or other criminals, Cassie goes to male-heavy bars and pretends to be drunk. The guys who offer to take her home appear to be nice guys but usually attempt to take sexual advantage of her thinking she's too drunk to care. Then -- surprise! She turns the tables on them by revealing she's totally sober and angry. Something happened to a female she knew about ten or more years ago. That something has caused Cassie to simmer with anger for all those years and the anger has now reached its boiling point.

America went from the "Me Too" period, which was ablaze with revelations about the creepy sexual behavior towards women by Harvey Weinstein, the once-beloved Bill Cosby and NBC's former "nice guy" TODAY Show anchor Matt Lauer, into the George Floyd "Black Lives Matter" protesting the racial inequality that still exists in the country. When women starting to speak out again Weinstein and Lauer and some said they were afraid to speak up earlier for fear that they'd never work again, I said to a Black male friend of mine, "I believe them." He agreed. We'd been in work situations in which we felt we were denied equal opportunities. We were advised not to complain to human resources about the racial inequality because we might not remain employed. Assaults against women and racial discrimination were two sides of the same coin.

Cassie has a right to be angry, just like relatives of George Floyd have a right to be angry. So, nowadays, I've grown weary of strong women with a righteous anger being portrayed and referred to as a "psycho bitch" or a "stupid c**t." Cassie is called both and, eventually, seen as slightly unhinged mentally. Also, I didn't like that as she works her way down her hit list, she places a couple of women in potentially dicey sexual situations.

Cassie is 30 and lives with her clueless but loving middle class suburban parents. She works as a clerk at a coffee shop. This coffee shop is not exactly Starbucks. It's never busy. We never seen more than three customers in it. Her personality behind the counter is not exactly charming. So, as the story of revenge progresses and she's driving around town, buying champagne at a ritzy restaurants, purchasing props and disguises for some of her revenge deeds and hiring help with those dark deeds, I kept wondering "How the hell is she doing all this with a coffee shop clerk salary?" Laverne Cox plays Cassie's boss. Unfortunately, the role is little more than the "sassy Black friend" role. Cassie is whip-smart. She should've been a marketing executive who represented one of the brands of coffee served in the shop...someone who was able to afford top legal help to bring the sexual assault case to light so justice could be served. 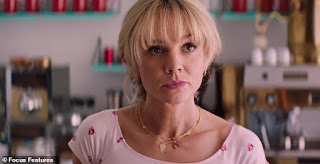 The film opens with a sequence inside a bar populated by many young men. We see shots of their crotches. They talk about women and getting lucky. They're predominantly White and have that nice guy, All American look. There is one Black guy with them. They all seem to work for the same company. My initial thought was, "The Black dude may think he's in with the group, but I bet they all get promoted before he does." Cassie is constantly asked "Are you okay?" Before we found out the full details on the assault, Cassie visits a female friend played by former SATURDAY NIGHT LIVE member, Molly Shannon. The friend knows what happened all those years ago. It's a short scene but one that reminds you that Shannon has proven to be a strong dramatic actress in recent years. Her character says to angry coffee shop clerk, "Cassie, move on. Please. For all of us."

But, of course, she won't. Carey Mulligan's performance is terrific. But the movie is sour and certain situations seem totally implausible.

One of the best parts of the film was seeing her reteamed with actor Alfred Molina as one of the few men in the story who provides her a moment of emotional relief. Molina was wonderful as the father to her character in AN EDUCATION.

I mentioned the dramatic film work of former SNL cast member Molly Shannon. I recommended you see her as the needy, neurotic Southern California office worker whose lack of romantic love leads her to have an obsession with owning dogs. That comedy/drama co-stars Oscar winner Regina King and it's called YEAR OF THE DOG (2007). In OTHER PEOPLE (2016), Shannon plays a terminally ill Sacramento mother whose gay son has come in from New York City to help her after he's broken up with his boyfriend. Shannon gave a Best Actress Oscar nomination-worthy performance in that touching film..