Black British actor John Boyega has a talent much larger than his STAR WARS assignments. Don't get me wrong. He's quite good as Finn as STAR WARS: THE FORCE AWAKENS. However, when an Argentinian friend and film historian urged me to see the 2017 drama DETROIT, directed by Oscar winner Kathryn Bigelow, my jaw just about dropped down to my sneakers. He was stunning in Bigelow's film based on a real-life racial incident that occurred in Detroit during the summer of 1967. The film seemed to get little promotion and, thus, little attention from the movie-going public. Audiences missed a strong film, one that would probably be more appreciated now in this era of Black Lives Matter. Boyega played a private security guard who gets caught up in the turbulence of a race riot, witness the racism of white police officers and gets charged with a murder he did not commit. Bigelow shot it like a horror film with innocent people in a big house at night when a monster enters. The monster is racism. DETROIT was released to commemorate the 50th anniversary of the Detroit race riots. Boyega proved he can do more than action/fantasy films.

Recently on Twitter, I read rave comments about Boyega's performance in a new British production. Directed Steve McQueen, the man who gave us 12 YEARS A SLAVE, created and directed a TV anthology series. Each film focuses on the lives of West Indian immigrants dealing with race in the 1960s, 70s and 80s. The anthology series is called SMALL AXE and it's available on Amazon Prime. Boyega appears in Episode 3 entitled RED, WHITE AND BLUE. The rave comments I read were accurate. Again, I was stunned by John Boyega's acting talent.

The episode opens with a little cherub-faced Black schoolboy, in uniform, waiting outside the schoolyard to be picked up. Classes are done for the day. Two White officers approach the little boy, question him and one mentions that crimes have been committed in the neighborhood. They want to search the little boy's kit. Up walk the lad's father, dressed like and resembling SHAFT, and he's irate. He calls out for the cops to stop their search, then he takes his little boy home.

Fast forward to the little boy grown up. Leroy Logan is a young man, obviously an over-achiever in school, who's working as a forensics scientist. But being in a lab feels limiting to him. He longs to do work that can be seen publicly. Work that brings about positive change. He wants to be a British cop. This is in the era of Billy Joel's "Uptown Girl" music video -- and the British police force is predominantly White. Not only is Leroy's immigrant father angry at his decision, angry at the way British cops have treated Black people, he's unjustly accused of crime by British cops and beaten so severely that he's hospitalized. This happens while Leroy is studying to be a cop and the assault on his father accelerates his drive to be on the police force. One White friend say to him "...you're well-spoken, you're clean cut, you're a stand-up bloke." He's also told "This isn't America" and reminded that there are no Black cops on the force. In training, the over-achiever Logan says that he's "...here to bring change to the organization from the inside out."

He becomes a cop and is subjected to bold-faced institutional racism from fellow male officers. As he attempts to bring out positive change, he has to deal with the racism from within the force and he's shunned on the streets by Black youths because he's a police officer. We see him steadily reach the same level of anger and fury that his father had because of racial inequality. He verbally explodes at his fellow officers. Still he stays the course. John Boyega gives a remarkable performance.

It wasn't until I was reading the end credits and saw "Consultant -- Leroy Logan" that I realized this feature was based on a real-life person and a real-life story. Logan, now retired, spent 30 years on the Metropolitan police force. He established the National Black Police Association. He's in his early 60s, the father of three children and his autobiography, CLOSING RANKS: MY LIFE AS A COP, hit British bookstores this year. Go to Amazon Prime and look for SMALL AXE. Also, check out DETROIT. 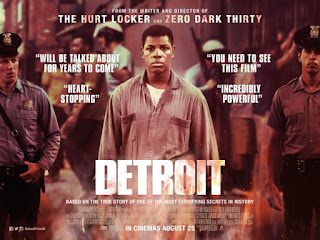 As DETROIT did, the RED, WHITE AND BLUE episode of SMALL AXE proves that John Boyega is ready for substantial lead roles. Here's a trailer.