I have been an ardent Tom Hanks fan ever since I saw the premiere episode of the 1980 ABC sitcom, BOSOM BUDDIES. Seeing him in drag every week was a highlight of my night. After starring on that sitcom, he went on to become on of my favorite film actors and one of Hollywood's most popular stars. SPLASH, BIG, A LEAGUE OF THEIR OWN and SLEEPLESS IN SEATTLE were box office winners to his credits and, coupled with his well-deserved reputation for being a true gentlemen, he became a beloved movie star. Many tagged him the new Jimmy Stewart thanks to his All-American warm appeal. I just saw the new Tom Hanks movie. It's a drama. And a western. I don't think I have ever seen Tom Hanks on horseback. But I certainly did in NEWS OF THE WORLD, a story that begins in North Texas in 1870. The Civil War is over. Ulysses S. Grant is President. As Jimmy Stewart has often been mentioned when describing the Hanks movie charm, this new film reminds me of those edgy, tough westerns Stewart made during the 1950s. Westerns in which there was a social darkness and he was not the "Mr. Nice Guy" of movies like DESTRY RIDES AGAIN, MR. SMITH GOES TO WASHINGTON and IT'S A WONDERFUL LIFE. Hanks plays a Civil War veteran named Captain Jeffrey Kyle Kidd. He is sort of a news anchor. As the movie opens, we see the film's title appear over a stack of newspapers on a desk. The newspapers are from various cities. Captain Kidd reads aloud stories from the papers to an eager seated audience. The audiences receives the stories as if they are that -- stories like those written by Mark Twain. To them, they're entertainment. Captain Kidd regards them as journalism that's giving the audience a world view and expanding their knowledge. 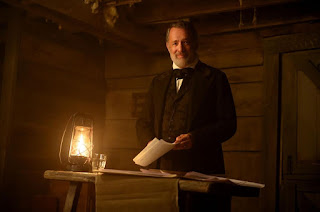 I found myself wishing that film had been released soon after we saw Hanks as TV's Mister Rogers in 2019's A BEAUTIFUL DAY IN THE NEIGHBORHOOD. Why? Because some elements feel contemporary -- especially considering the temperature of the nation under the administration that leaves the White House next month. As Kidd tells his audience that he's about to read them "...the great changes that are happening out there," we see the predominantly White audience. One Black woman sits way in the back. One of the stories is about the meningitis epidemic. The audience gasped when Kidd read that the epidemic had claimed 97 lives. Kidd is a traveler. As he tells one person, "I read the news from town to town."

A little lost blonde girl is placed in his custody. She speaks German and some Native American. Her name is Johanna and she's reminiscent of the Natalie Wood character in John Ford's THE SEARCHERS. Her family was killed by Indians, the Indians took her captive for quite some time. Long enough for her to learn their ways and some of their language. Kidd becomes her protector because he knows he's in harsh Texas territory. Not just geographically harsh. He's shocked to discover the corpse of a Black person attached to a sign that reads "This is a white man's country." He's targeted by Texans who brag of having killed Mexicans and Indians. He's targeted for advocating a free press and reading news about President Grant and the proposed abolition of slavery, He protects Johanna from sexual predators and other dangers. He's determined to get her to a safe place with other immigrants of her kind. Helena Zengel plays the mysterious, brave Johanna. 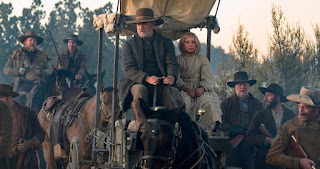 Captain Kidd and little Johanna are strong characters who have a heaviness in their hearts. Will we learn what it is and can they both reach some kind of a safe place?

A western may seem like odd movie territory for Tom Hanks but, if you're a Hanks fan, consider seeing this. He's in excellent form as the war veteran trying to move through the darkness of society and his own soul. Based on a novel of the same name, NEWS OF THE WORLD was directed and co-written by Paul Greengrass who previously directed Hanks in CAPTAIN PHILLIPS.