I watched the adaptation of MA RAINEY'S BLACK BOTTOM on Netflix. It's the film based on the play by August Wilson. I predict that the marvelous Viola Davis will get an Oscar nomination for Best Actress. The nomination will make her the most Oscar-nominated Black actress in Hollywood history. That will be her fourth nomination. If she's nominated and wins, she will be the second Black woman in all Hollywood history to take home the Oscar for Best Actress. Viola Davis goes beyond acting in this production. She is Ma Rainey -- the proud and potent Mother of the Blues. As Ma will tell you in a heartbeat, Bessie Smith learned from her. From the moment you see her, Ma Rainey's face tells you all you need to know about her. This is a tough, under-respected artist who has paid her dues and has helped pay some other people's dues. She's a bi-sexual blues singer keeping a recording date with her band. The story opens in small town Georgia and takes us to the recording session in 1927 Chicago. 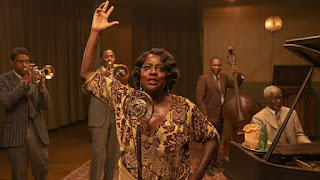 Davis gained weight, close to 200 pounds, to play the role. She's since dropped the pounds and, with the help of a trainer, got into svelte shape for her next role. She is dynamic as this woman, demanding attention and respect in her recording session while knowing her artistry will never get the respect and pay it deserves because she's Black. Viola Davis is stunning in the role. Solid work also comes from the late Chadwick Boseman as young Levee, a gifted jazzman who carries the blues and the rage of his race in his soul. Boseman could get a post-humous Oscar nomination for Best Supporting Actor. He's a memorable standout in the role. Also delivering a stellar supporting performance is veteran Black actor Glynn Turman as Toledo, the silver-haired member of the band who has his way of surviving the racism of America. Turman is now in his early 70s. He deserves major recognition. We saw him on the big screen as a high schooler in COOLEY HIGH (1975) and in the foreign film THE SERPENT'S EGG (1977) written and directed by master filmmaker Ingmar Bergman. He has extensive TV credits. Turman was a regular on the hit sitcom, A DIFFERENT WORLD and later on HBO's THE WIRE. In the original 1959 Broadway cast of Lorraine Hansberry's A RAISIN IN THE SUN, Sidney Poitier and Ruby Dee played Walter and Ruth Younger. Glynn Turman played the couple's little boy. Yes, Glynn Turman deserves recognition. I highly recommend you see MA RAINEY'S BLACK BOTTOM. George C. Wolfe directed it. Denzel Washington co-produced it.
Viola Davis' Oscar nominations came for DOUBT, THE HELP and FENCES. In FENCES, also an adaptation of an August Wilson play, her leading man and director was Denzel Washington, He directed her to an Oscar win for Best Supporting Actress.

Here's a true happening from my life: In the mid 1990s, I was working on live local morning news program in New York City after three years of network host work on VH1and on a syndicated summer replacement late night game show. However, I still had no agent. A New York City in the Broadway theatre district contacted me and enthusiastically said she was a big fan of mine and could do big things with me. She booked me for a meeting. She booked another fellow too. I introduced myself and we chatted before our meetings. Honestly, I was surprised to see him there and surprised he didn't have representation. I'd seen him so excellent work on stage on in TV roles. He's a Black/Latino talent.

We both signed with that agent. Eight months later, she dropped us both. She said she didn't know what to do with us. 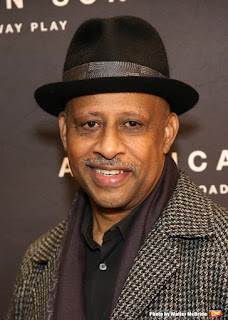 The other fellow is actor, playwright and screenwriter Ruben Santiago-Hudson. He wrote the screenplay for MA RAINEY'S BLACK BOTTOM. And he did a damn fine job.