Meryl Streep at THE PROM

Discrimination grows like new corn in Indiana. A group of New York City theatre actors hears about the high school lesbian who is not allowed to bring her girlfriend to the prom. Before you know it, the group storms into an Indiana auditorium and proclaims "We're liberals from Broadway." Based on a Broadway show, THE PROM is a musical comedy with a "Live and Let Live" vibe. You know that there will be show tunes. You know that some moments will be campy. You know that there will be a happy ending. The New York City actors will put their hunger for publicity aside and truly, unselfishly do the right thing for diversity and equal rights. Meryl Streep may get he umpteenth Oscar nomination for THE PROM -- and she'll deserve it. She's at the top of her musical game here. She sings, she dances, she's an absolute hoot as the self-absorbed and delightfully clueless redheaded Broadway diva whose new show was barbecued by the critics. She starred in ELEANOR!: The Eleanor Roosevelt Musical. She and her co-star who played President Franklin D. Roosevelt, are both out of work because of the bad reviews. Her gay co-star is played by James Corden. The cast also includes Nicole Kidman, Andrew Rannells, Keegan-Michael Key, Kerry Washington and Tracey Ullman. THE PROM was directed and co-produced by Ryan Murphy. 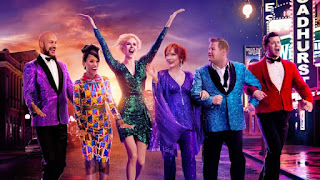 I had planned on going to Netflix and watching THE PROM, but not right away. That was until I logged onto Twitter and saw about a half dozen reviews slamming James Corden for his performance as Barry Glickman. The reviews criticized the heterosexual actor for being too "over the top" in his performance as a character who's a big queen. A couple of reviewers accused him of "gayface."

I don't recall critics -- some gay, I assume -- complaining when straight actors William Hurt, Tom Hanks and Sean Penn won Best Actor Oscars for playing gay men. No one complained about straight Dwayne "The Rock" Johnson playing a gay bodyguard who really embraces his gayness when he comes totally out and goes clothes shopping in BE COOL. No one complained about straight Meryl Streep playing lesbians in Woody Allen's MANHATTAN and in THE HOURS. Gay critics had no problem with straight Eric McCormack being a gay man on the hit sitcom, WILL & GRACE. No one accused openly gay actor Neil Patrick Harris of "straightface" during all the seasons he played a very hetero, babe-chasing bachelor on the sitcom, HOW I MET YOUR MOTHER.

So why the vitriol for James Corden, a Broadway Tony winner and a talent who delivered a fabulous and slightly campy opening number the first year he hosted the Tony Awards? Is it because, unlike the Best Actor Oscar winners, muscle hunk Dwayne Johnson and handsome Eric McCormack, he's a chubby guy who looks like the manager at your local supermarket?

Corden did not thrust himself into THE PROM. He was cast and he was directed by Ryan Murphy. If Murphy felt he was too over-the-top, he could've pulled the actor aside, given him a few notes and then shot another take. And another thing -- have those Corden critics never seen a Ryan Murphy show? GLEE, AMERICAN HORROR STORY, POSE or FEUD: BETTE AND JOAN about the making of WHAT EVER HAPPENED TO BABY JANE? starring Jessica Lange as Joan Crawford and Susan Sarandon as Bette Davis? If you whacked a gay piñata, a Ryan Murphy production would fall out of it. His work puts the "b" in the word "subtle." He does not let you forget he's a non-heterosexual director/producer. His brand is rather like this:

James Corden and Meryl Streep worked together in Disney's fantasy musical INTO THE WOODS, also a film adaptation of a Broadway show. Murphy reteamed them for THE PROM. To me, Corden is just fine in THE PROM. The critics who slammed him should've done some journalistic investigating and asked director/producer Ryan Murphy if he considered gay actors Nathan Lane, Tituss Burgess or Mario Cantone before they dragged Corden.
Streep pretty much steals THE PROM while graciously allowing her co-stars to shine in scenes with her. Her Dee Dee Allen is a divorced 2-time Tony winner who can't believe she's now on a bus to Indiana with her real intent to get some positive publicity after her show's disastrous reviews. Watching her check in to a budget hotel made me laugh out loud. I loved her musical numbers. I have a few decades of Streep fan devotion to my credit. Watching her as Dee Dee and then realizing this is the same actress who played the Polish Holocaust survivor in SOPHIE'S CHOICE, the Danish author who toiled the rich yet unforgiving land in OUT OF AFRICA, British Prime Minister Margaret Thatcher in THE IRON LADY and famed TV chef Julia Child in JULIE & JULIA ...well, she's amazing. That's all I can say.
Nicole Kidman plays the longtime CHICAGO chorus girl. She does a motivational Fosse-esque number for the lesbian high schooler that's a sweet highlight. Andrew Rannells scores as the Juilliard graduate who will not let you forget that he's a Juilliard graduate. Kerry Washington shows us that she should be getting more comedy script opportunities. We've seen her skill mostly in dramas. However, she was one of the funniest SATURDAY NIGHT LIVE hosts to grace the program in a last few years. Tracey Ullman appears in a heartbreaking scene with James Corden.
Keegan Michal-Key has a good and wise number about why we love Broadway shows and performers. He plays the the high school principal who once saw Dee Dee Allen onstage. One big highlight of THE PROM is every single scene Meryl Streep and Keegan Michael-Key have together. What unexpectedly delicious chemistry! My only fear is that Ryan Murphy will sign them to a made-for-Netflix musical version of DRIVING MISS DAISY. 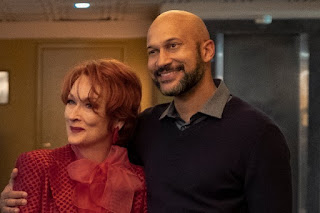 THE PROM was fun for me. It may be for you too. Here's a trailer.