MANK Is Not Just About Kane

In MANK, available on Netflix, Gary Oldman excels in his performance as Hollywood screenwriter Herman Mankiewicz. This feature show him as a hardcore alcoholic and a brilliant writer, more the genius behind the film classic CITIZEN KANE than Orson Welles was. He's presented as the script's sole writer. The film is in black and white and it's a Hollywood-on-Hollywood biopic. The Academy loves biopics. Look at the actors who've taken home some Hollywood gold for portraying real-life characters. From Luise Rainer as entertainer Anna Held in THE GREAT ZIEGFELD (1936) and Spencer Tracy as Father  Flanagan in BOYS TOWN (1938) to modern times, actors such as Julia Roberts, Sandra Bullock, Nicole Kidman, Meryl Streep, Charlize Theron, Jamie Foxx, Sean Penn, Philip Seymour Hoffman, Daniel Day-Lewis, Cate Blanchett and Renee Zellweger have won Oscars for biopics. Gary Oldman did too. He was outstanding as Winston Churchill in 2017's DARKEST HOUR. He rates another Best Actor Oscar nomination thanks to his work in MANK. 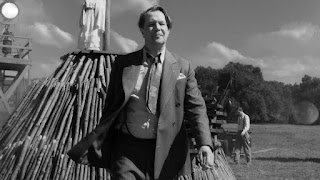 To me, the film has a lot of wit and surprising timeliness for a story that takes us back to Hollywood in the 1930s. Besides being a drinker, Mankiewicz was an intellectual and a liberal who was forced to deal with Hollywood conservatives in order to stay employed. And there there was the wealthy and powerful newspaper publisher, William Randolph Hearst. Actress Marion Davies was his lady love. His Hearst Castle overlooking the Pacific Ocean near San Simeon was popular with Hollywood stars for its elite dinner parties and weekend getaways. It's classic film fan folklore that Charles Foster Kane and Susan Alexander, his minimally talented mistress, in CITIZEN KANE were based on Hearst and Davies. I heard about Marion Davies when I was a kid and asked my mother who she was. Mom replied, "She was a movie star. More talented that folks thought she was." That is exactly how she is presented in MANK. Amanda Seyfried is marvelous as Marion Davis. She's ripe for a Best Supporting Actress Oscar nomination. Her Davies is warm, self-aware, loyal and smart. A good woman. Think of the movie CABARET. We see action in 1931 Berlin. Nazis are gaining power. Jews are in danger. At this same time, Louis B. Mayer, iron-fisted MGM studio head, and William Randolph Hearst aren't taking Hitler seriously when they hear news about him on the radio. Mayer wouldn't make a movie challenging the Nazis at that time because his films, especially those starring Greta Garbo, did great box office in Germany. During one dinner party, Mayer (Jewish) is not concerned at all about Hitler. Neither is Hearst. Charles Dance stars as Hearst. In one scene, he sits in a big, regal chair before a fireplace. With the flames whipping behind him, Hearst looks like he's an executive in Hades.  The two powerful men are not paying attention to Hitler but Marion Davies speaks out against him. Herman Mankiewicz shares her views and they became immediate friends.

Amanda Seyfried resembles Madonna in her late 1980s music video "Express Yourself." That video was directed by David Fincher. The video visually recreates scenes from Fritz Lang's 1927 classic METROPOLIS. He directed THE SOCIAL NETWORK, ZODIAC and FIGHT CLUB -- films that have a "men behaving badly" element.  Fincher directed MANK in which that element is quite evident. The FIGHT CLUB line "The first rule of Fight Club is you don't talk about Fight Club" could apply to how privileged insiders feel about Hollywood and Hearst Castle. In that dinner scene, while Marion Davies and Herman Mankiewicz take Hitler as a serious threat to democracy, Mayer and Hearst are more concerned with getting a conservative elected governor of California in 1934. They favor a candidate. Mankiewicz favors that candidate's opponent. This is action we see before we get into Mankiewicz's work and conflict with Orson Welles. Hearst Castle was sort of 1930s Mar-A-Lago where no one seemed to take socially aware Marion Davies seriously and Herman Mankiewicz was a talented underdog. Hollywood writers are usually portrayed as underdogs. Think of William Holden as Joe Gillis in Billy Wilder's SUNSET BLVD (1950) and John Turturro as BARTON FINK (1991). In one early scene, Mankiewicz runs into the revered MGM producer, Irving Thalberg. Thalberg is with Louis B. Mayer. As Mankiewicz leaves, Thalberg describes him to Mayer as "Just a writer."

With the Hollywood and publishing players supporting a conservative for political office during the Depression, when Americans are unemployed and broke, I thought of NBC promoting Donald Trump when he was host of the network's reality game show, THE APPRENTICE. Even though he was sending out racist items on Twitter about President Obama not being a real American, tweets that irritated us African Americans, he was neither disciplined nor punished by NBC. He continued to send out racist tweets. When he became a presidential candidate, he repeatedly insulted Mexico and Mexicans. Still, NBC let him host SATURDAY NIGHT LIVE for a night. The New York Post is a pro-Trump newspaper.

That's why the liberal social awareness in MANK made me feel it was not just about CITIZEN KANE. MANK suggests that Welles, although a gifted filmmaker, may not have been as great as his legend. However, he crafted and directed his legend with the same attention he gave to directing CITIZEN KANE. When we baby boomers were kids, we were aware of the legend of CITIZEN KANE and its "boy wonder" star/director Orson Welles. At that time, we also knew him as the obese man who was roasted by TV critics for his lead role performance in a special NBC production of THE MAN WHO CAME TO DINNER, his TV spokesman work in some popular wine commercials on network TV and his talk show appearances.

At another Hearst dinner party, Mankiewicz arrives drunk and out of control. Mayer and Hearst and Davies are present. Mankiewicz has completed the CITIZEN KANE script. In an inebriated rant, he walks over to Hearst and describes Kane (Hearst) as a man who "...values power over people."

Yep. Considering the current White House resident who is leaving next month, I feel MANK is not just about CITIZEN KANE. I recommend seeing this well-made, well-acted and timely biopic. It's on Netflix.