She was a trailblazer who really did make it all look easy -- when it really wasn't.  And she demanded to be paid well for hard work well done.  I loved that.  When I was a kid, Della Reese was an entertainer our family always watched on TV.  We had Della Reese albums.  She had a comfortable and colorful personality that made her a good TV show guest. She had that rich, full voice.  And she'd cook!  THE MIKE DOUGLAS SHOW was a daytime talk/variety show that watch when I got home from school.  Della was a frequent guest and, one time, made a dessert.  Viewers could send in a self-addressed, stamped envelope for a copy of "Della's Deep-Dish Apple Pie."  That was one of the first pieces of mail I received when I was a kid because I begged Mom to let me send in for it.  And Mom, bless her heart, made Della's dessert so I'd simmer down and move on with my little life.  (Della's pie was delicious.)  Two black woman who were pianists and vocalists had shows on TV in the 1950s.  The first was Hazel Scott.  Her 15-minute music show aired three times a week.  I believe it was national.  Then Hadda Brooks (seen playing piano and singing in 1950's IN A LONELY PLACE starring Humphrey Bogart and Gloria Grahame and 1952's THE BAD AND THE BEAUTFUL starring Kirk Douglas, Lana Turner and Gloria Grahame) had a show that aired on local Los Angeles TV with repeats up in San Francisco.  But, come the 1960s, Della Reese made broadcast history when she was the first black woman to host her own weeknight syndicated talk/variety show. She sang and did interviews.  Della gave us solid entertainment. 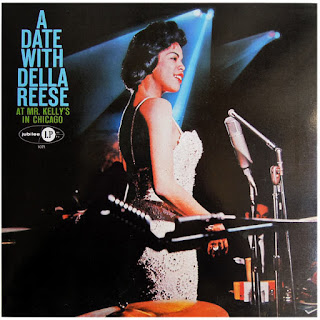 Did you know that Della Reese was the first black woman to substitute for Johnny Carson as host of NBC's TONIGHT Show? 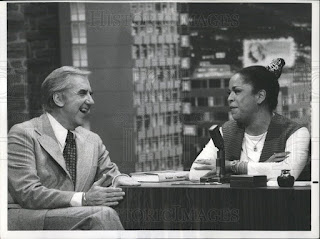 The first time I met her was in 1984.  I was the cohost of a live weekday afternoon show that aired on Milwaukee's ABC affiliate.  She was in town for an engagement and to pitch a food product.  I think it was Campbell's Soups and she was promoting quick recipes that would include the soups.  Della Reese was friendly and formidable.  You knew she was a no-nonsense dame who wanted to make sure her product was promoted and that she'd be treated respectfully.  We had a kitchen on the set and she'd brought some items, so the segments worked out perfectly.  Also, she liked me.  She made a casserole using cans of a certain soup.  When the segment and the show were over, the crew from the control room didn't get to taste the food as it usually did when we had cooking segments.  Why?  Because when Della Reese had completed her guest segments on our live show, she went back to the hotel -- and took the casserole with her. 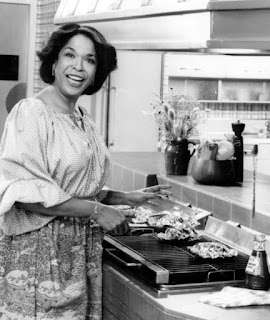 The next time I interviewed her was in New York City.  I was on Fox5's GOOD DAY NEW YORK and, by that time, she'd gained millions of TV fans from her work on the hit CBS series, TOUCHED BY AN ANGEL.  Previously, Della had been a TV cast member on CHICO AND THE MAN and she starred on TV's THE ROYAL FAMILY with her dear friend, Redd Foxx.  He died during the 1991-1992 run of the show.  TOUCHED BY AN ANGEL became one of CBS' biggest hits.  However, when it was making the Top Ten, star Roma Downey reportedly got a 100% raise and Della got something like a 12% raise.  Remember, I said that Della was "formidable."  She went public with her pay inequality.  She said, "It's tough to be an angel in Hollywood when you're underpaid." 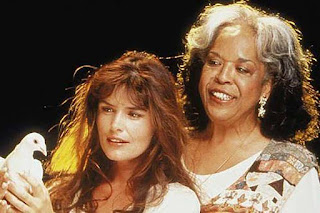 In my New York City interview of Della Reese, around 1999, she was promoting a book she'd written for youngsters.  A book to help them know God. 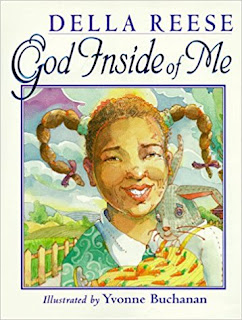 With her TV performances and her scene-stealing film work in HARLEM NIGHTS with Eddie Murphy, I was curious how she so effectively made the transition to acting.  I asked if she had acting classes or a coach and she immediately, proudly declared "Jeff Corey!"  She credited him with her acting success. 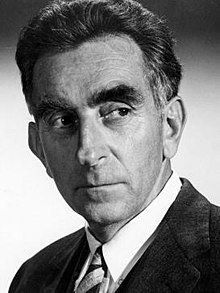 His was not a household name when it came to discussing movie stars but his was a face many classic film fans would quickly recognize.  He was one of those character actors who was always good.  His film credits included THE KILLERS (1946) and BRUTE FORCE (1947), both with Burt Lancaster, HOME OF THE BRAVE (1949) as the Army psychoanalyst trying to root out the cause of an African American GI's nervous breakdown.... 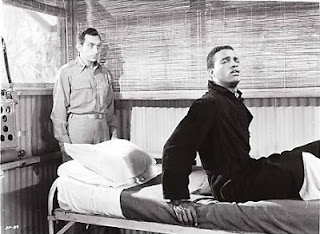 Corey was one of those 1950s actors who, unfortunately, was blacklisted.  He became a respected acting coach.  Eventually, he got a lot of future work in TV and went back to films. 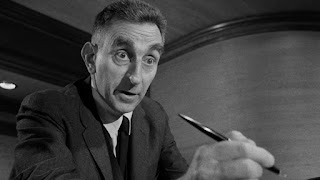 I knew who Jeff Corey was from classic films that I'd seen.  But, until that late 1990s interview of Della Reese, I had not known that Mr. Corey was a top acting coach.

And there you have it.  A little something you didn't know about the very talented Della Reese.  The actress/singer died this week at age 86.  She was wonderful. 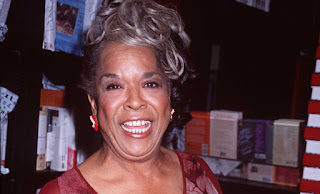