What a year that was.  We were dancing to disco music.  We were thrilled for the Summer of 1976.  It was America's Bicentennial Year.  The same year we celebrated our Declaration of Independence, out came an intense, incendiary, original satire called NETWORK.  This take-down of the TV industry showed us our freedom and individuality being gobbled up by greedy corporations.  NETWORK, starring the late Peter Finch as delusional network news anchor Howard Beale, opened nationwide on November 27, 1976.  Beale was like a crazed John the Baptist crying out "I'm as mad as hell and I'm not going to take this anymore!" 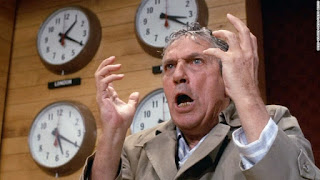 I was working in Milwaukee radio at the time.  NETWORK opened a couple of years before I started my TV career.  When it was released, there was still a noticeable division between news and entertainment on TV.  The first time I saw NETWORK, with its original screenplay by Paddy Chayefsky, it was like a punch to the gut.  It made you laugh while also making an impact.  It made such an impact on me that I paid to see it more than once.  Each time I went to see it again, the movie theater was packed.  NETWORK was a hit.  Audiences headed to see a smart, intelligent and prophetic satire.  Nowadays, audiences of that size are mostly sitting through another big screen superhero action sequel.  Directed by Sidney Lumet, this film brought Faye Dunaway the Oscar for Best Actress. 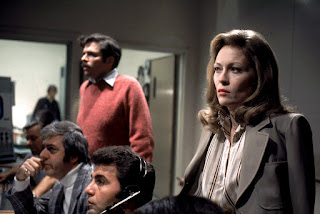 Have you seen NETWORK lately?  You should.  It still holds up.  Not only does it hold up, but the soulless network producer that Faye Dunaway played was victorious in terms of the kind of TV programming we see today.  When delusional Howard Beale gets on the air and spontaneously vents his angers, it hits a nerve with the public.  Ratings zoom up.  Diana (Dunaway's character) takes advantage of the situation to pitch other products.  When I saw the film, the movie audience laughed and gasped when she pitched a weekly reality that followed a SWAT team.  Years later, we had a popular TV show called COPS.  Think of other reality shows.  Diana offended our sense of good taste and good journalism but we had no idea that she represented our future. 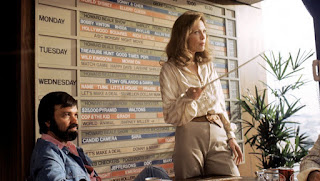 One huge laugh NETWORK got each time I saw it in a theater was when Beale's network news program had been revamped to include a live studio audience.  Moviegoers thought that a news story segment getting applause like a variety show piece was the height of absurdity. 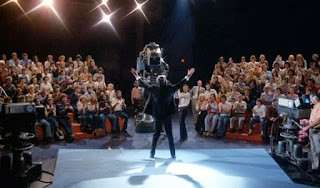 Another big laugh NETWORK got came when the revamped news program had a regular called "Sybil the Soothsayer."  She made predictions.  Again, that was 1976.  In the 1996, I was a regular on Fox 5's GOOD DAY NEW YORK, a local weekday morning news program.  Our executive producer booked a number of long live call-in segments with a woman who claimed to be a pet psychic.  Yes.  An 8-minute live segment with viewers calling in to ask how their dead pets were doing in the afterlife.  8 minutes.  I argued with the same producer when I wanted more time to interview actor/writer John Leguizamo.  He was coming in live to talk about his upcoming stage show.  I was booked to have 90 seconds live in-studio with him.  I argued that it was unfair to give a pet psychic 8 minutes but I could only have a minute and a half with a gifted, acclaimed and accomplished Puerto Rican film/stage actor and writer -- in New York City.  I got more time to interview John.  But not as much as the pet psychic got for her segments.

When I had my first professional fulltime job, it was that Milwaukee FM radio job.  It was a rock radio station and I was a news reporter.  I was also the only black on-air employee at the whole FM rock music radio station.  I watched the Oscars with an on-air co-worker the night the later Peter Finch won the Oscar for Best Actor.  He died of a heart attack a couple of months before the Oscars telecast in 1977.

My co-worker's jaw practically dropped down to the carpet when screenwriter Paddy Chayefsky called Peter Finch's widow to the stage.  My co-worker sputtered "She's...she's!"  He was at a loss for words because....well...see for yourself:
My white co-worker was shocked.  I was proud and joyful.  I loved that moment and her gracious speech.

NETWORK.  It's still relevant.  As I've said before...when Paddy Chayefsky gave us that screenplay, he wasn't just a writer.  He was also a prophet.