I saw that November 13th is Whoopi Goldberg's birthday.  She will celebrate.  I sat next to her just about every week for two consecutive years and I know that she digs a celebration and also digs getting gifts.  She still has such a youthful glee about that.  I continue to be extremely grateful to her.  I continue to hold that she is one of the most underrated acting talents who is a member of the Screen Actors Guild.  When's the last time you saw THE COLOR PURPLE?  That Steven Spielberg film made her one of the few black women in Hollywood history to be an Oscar nominee for Best Actress.  If you haven't seen it lately, you need to see it again.  Whoopi Goldberg's performance in it will lay you out.  It is one of the best performances delivered by an actor in a Hollywood studio film during the 1980s.  It holds up.  It is as raw, fresh, poignant and soul-stirring now as it was in 1985. 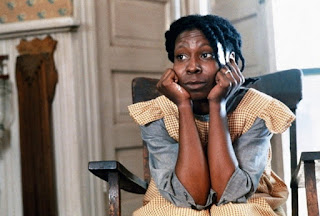 I met and interviewed Whoopi Goldberg when she was promoting her 1988 movie, CLARA'S HEART.  Her co-star in that movie was a teen actor named...Neil Patrick Harris.  I had my own prime time celebrity talk show on VH1.  A half-hour show that I absolutely loved.  I loved working on that show and I loved my crew.  Whoopi was one of our premiere guests.  I was lucky enough to get great guests -- most of whom I interviewed one-on-one for the whole show.  Kirk Douglas, Meryl Streep, Mel Gibson, Marlo Thomas, John Lithgow...and Whoopi Goldberg were some of those guests.  I had been in awe of Whoopi's versatility before THE COLOR PURPLE thanks to multiple VHS video rentals of her acclaimed stage show, WHOOPI GOLDBERG: DIRECT FROM BROADWAY.  This was the one-woman show in which she played several memorable and very funny, very touching characters.  The legendary Mike Nichols had spotted her, taken her to Broadway and become her mentor.

We didn't have a studio audience and a band for my talk show.  We did it live to tape and I wrote and performed it as if it was onstage.  That was my choice.  When Whoopi came on to be a guest, she was the first guest who noticed that I didn't have an earpiece, a TelePrompTer or cue cards.  I had a few notes on the desk and the rest was in my head.  I wanted to be in the moment.  That impressed her and, man, was I proud of that! 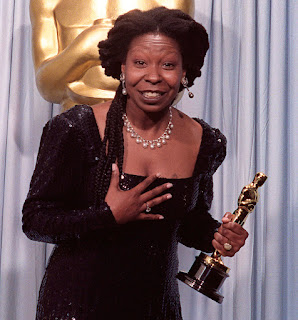 When she won the Best Supporting Actress Oscar for GHOST (1990), she made history as the first black actress to win the Oscar in that category since Hattie McDaniel's groundbreaking nomination and win for 1939's GONE WITH THE WIND.  For quite a long time, Whoopi Goldberg -- with her two nominations -- was the most Oscar-nominated black actress in Hollywood history until Viola Davis got her third nomination and won Best Supporting Actress early this year for FENCES (2016).

When Whoopi got her own weekday live morning radio show in New York City, a show that aired nationally on 16 stations across the country, she tapped me to be the weekly entertainment contributor and film reviewer.  I am still thankful to Whoopi for that opportunity.  And, I must admit, going to work and sitting next to a show biz icon as we both did live morning radio was a very surreal experience.  It was during our two years of her show that Whoopi became a full-time popular regular on ABC's THE VIEW. 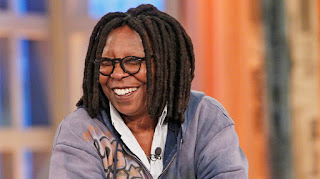 Like Rita Moreno, Cicely Tyson, Angela Bassett, Alfre Woodard, Diahann Carroll, Taraji P. Henson, Gabourey Sidibe, Jennifer Hudson and even Viola Davis...Whoopi Goldberg turned to television after one or two Oscar nominations because Hollywood had no more good script opportunities for them, women of color.  And they wanted work.  Through the years, they did not get numbers of script offers like white actresses such as Meryl Streep, Michelle Pfeiffer, Demi Moore, Sharon Stone, Julia Roberts. Jennifer Aniston and Jennifer Lawrence.

If you can ever find a copy of WHOOPI GOLDERG, DIRECT FROM BROADWAY, I urge you to watch it.  Also, THE COLOR PURPLE and GHOST were not the only films in which she slammed across a solid performance.  I also recommend these films that often get overlooked when folks talk about their favorite Whoopi Goldberg films: 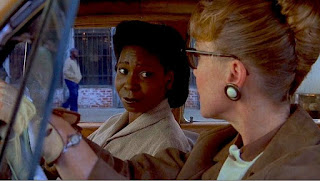 THE LONG WALK HOME (1990).  Whoopi and Sissy Spacek star in this fine, mature Civil Rights film.  Two women. One black and one white, both mothers in Montgomery, Alabama during the famous 1950s bus boycott lead by Martin Luther King, Jr.  One of Whoopi's finest film performances.

THE PLAYER (1992).  A Robert Altman film.  A Hollywood studio executive gets mysterious death threats from a screenwriter whose script he rejected.  Tim Robbins plays the executive.  Whoopi plays Detective Avery, the cop on the case.  The movie is packed with star cameos -- Jack Lemmon, Cher, Bruce Willis, Burt Reynolds and more.  Enjoy.

CORRINA, CORRINA (1994).  This is a feel-good comedy romance that I love to watch as weekend entertainment.  Whoopi plays the maid working for a widower dad with a sweet little girl.  Ray Liotta gets to exercise his comedy acting muscles as the lovable dad.  He tries to make money writing commercial jingles and, since the death of his wife, he needs help around the house while he's at work.  Corrina, the maid, helps the little girl out of her grief.  The main thing here is the delicious chemistry between Whoopi and Ray Liotta.  In the film, you see that romance quietly starts to bloom between Corrina and Manny (Ray Liotta).  But...the year is 1959.  When Whoopi and I worked together, I told her that CORRINA, CORRINA should be turned into a Broadway musical.

GHOSTS OF MISSISSIPPI (1996).  A true story and another dramatic film triumph for Whoopi Goldberg.  If you saw the movie, THE HELP, a major turning point is when the black characters watch the network news bulletin that Civil Rights leader Medgar Evers had been shot and killed in front of his home.  The year was 1963.  Years later, with the steely determination of his widow, the racist killer is brought to justice.  In GHOSTS OF MISSISSIPPI, Whoopi plays Myrlie Evers, widow of the slain activist.  James Woods is chilling as the cold-blooded racist killer. He got a Best Supporting Actor Oscar nomination for his performance.  GHOSTS OF MISSISSIPPI was directed by Rob Reiner.  Alec Baldwin co-stars. 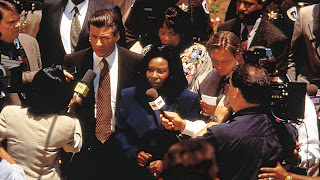 I wish Whoopi Goldberg a most fabulous birthday.  By the way, she's now on the Motion Picture Academy's Board of Governors.