If you possess that inner fire to pursue a form of creativity, a path to performance, you must follow your feelings with faith in getting help from the universe, even when some folks who are very close to you try to douse that fire.  Anyone who toiled years to become "an overnight success" may agree with me.  Never give up.  Be like Oscar-winning actress Octavia Spencer.  She won the Best Supporting Actress Oscar for her excellent work as Minny, the dissident maid in THE HELP. 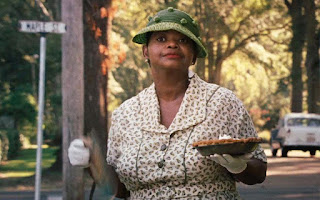 Did you see SPIDER-MAN (2002) starring Tobey Maguire as the shy high school teen who suddenly has a sticky substance shooting out of him coupled with his power to zoom through the air?  Well, today I saw an article online that was highlighting actor Michael Manganiello, the hot and handsome muscleman who won TV stardom as a wolfman on HBO's TRUE BLOOD and then carbonated female hormones on the big screen as a male stripper in MAGIC MIKE movies starring Channing Tatum.  In the first 20 minutes of SPIDER-MAN, about seven years before he became a TV wolfman, Manganiello played high school cafeteria bully Flash Thompson.  Also in the cast is Kirsten Dunst, with red hair, as Mary Jane Watson.  Look at this clip to refresh your memory.
In the same first 20 minutes of SPIDER-MAN, we see a bit player who has no more than five lines.  Her character works the registration desk at a wrestling competition that Peter Parker (Maguire) enters.  That bit player in the role of "Check-In Girl" was Octavia Spencer.  Again, that was 2002.  THE HELP, which gave Octavia her breakthrough and Oscar-winning role, came out in 2011. 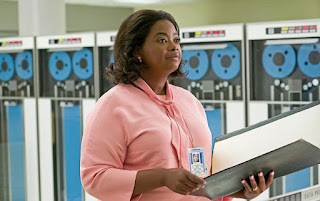 Octavia Spencer and Kirsten Dunst have scenes together in HIDDEN FIGURES, one of the Oscar nominees for Best Picture of 2016.  Just like SPIDER-MAN, HIDDEN FIGURES focuses on a male flying high through the air.  Octavia played one of the three brilliant black women working at NASA in the early 1960s.  John F. Kennedy is president, the Civil Rights Movement is underway and NASA aims to get launch astronaut John Glenn into space.  Kirsten plays an office supervisor.  She may not be racist but she certainly falls in line with the race, class and gender system at play within the corporation and the country at that time.  Watch this short feature about HIDDEN FIGURES, based on a true story about three black women whose names and extraordinary mathematical accomplishments helped NASA succeed but those women were not noted in American history books.
HIDDEN FIGURES is one of my favorite films that came out last year.  It thrilled and touched me when I paid to see it in a cineplex.  I've watched it several times on HBO. 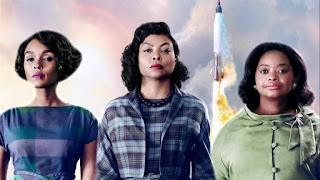 Octavia Spencer got her second Best Supporting Actress Oscar nomination for HIDDEN FIGURES.  She has tied with Whoopi Goldberg as the second most Oscar-nominated black actresses in Hollywood film history. 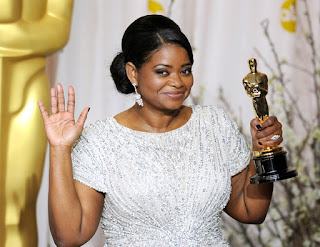