Fred MacMurray.  Man, there was an actor who deserves more attention than he gets from classic film enthusiasts.  We baby boomers loved him as a Disney dad in popular 1950s and 1960s films before his years on the hit sitcom, MY THREE SONS.  But he was a handsome leading man for Paramount Pictures in the 1930s and 40s.  A handsome leading man who could handle drama, action, history-based stories and he could sing.  Maybe he didn't become a huge, famous movie star like Clark Gable, Gary Cooper, James Cagney or Humphrey Bogart, but he racked up an impressive list of screen credits starring opposite some of Hollywood's top star actresses.  MacMurray was a fine leading man to Claudette Colbert, Carole Lombard, Barbara Stanwyck, Marlene Dietrich, Rosalind Russell, Madeleine Carroll, Irene Dunne and Jean Arthur.  He had a big, strong, good guy image in movies with them.  Then Billy Wilder came along on the Paramount lot and challenged Freddie Mac to change that image in a new movie.  He'd reunite with his co-star from REMEMBER THE NIGHT, a 1940 romantic drama set during the Christmas season.  That co-star was Barbara Stanwyck.  She'd be changing her image in Wilder's movie too.  Now considered a film noir classic, the Billy Wilder film was the brilliant DOUBLE INDEMNITY (1944).  She played the cold-blooded blonde vamp in L.A. who wants her husband knocked off.  He's the horny insurance agent who gets suckered into carrying out her lethal ambitions so she can claim a big insurance pay-out.  He's Walter Neff. 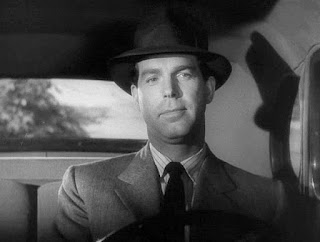 When we first see him in the movie, he's speeding to his insurance office in the pre-dawn hours to record some notes.  He's not doing too well.  He's got a bullet in him.  It's a product of Phyllis Dietrichson's blonde ambition. 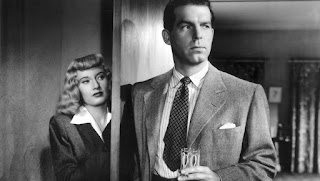 Walter Neff works for Pacific All Risk.  Click onto this link and watch this DOUBLE INDEMNITY clip:  https://youtu.be/D76YDNS1m00.

My suggestion for a Billy Wilder DVD double feature is DOUBLE INDEMNITY and Wilder's now-appreciated classic, ACE IN THE HOLE.  That 1951 drama foresaw the "media circus" before it became a regular event and a journalism term in the 1990s.  Only in the last ten to fifteen years has ACE IN THE HOLE received the respect, the restoration and the revival due it.  When originally released, critics hated it and the public didn't go to see it.  Under a new title, THE BIG CARNIVAL, it was kicked to the public domain curb.  Tired, worn-out prints of it frequently turned up on late night local TV.

A hotshot New York City reporter whose moral compass is not where it should be winds up in New Mexico.  This arid town is not where he wants to be.  Then a local married guy gets trapped in a cave collapse while hunting for ancient Indian collectibles.  His wife is back at their local diner business.  The unscrupulous newspaper reporter senses a story -- a story he can work to get fame and fortune.  He manipulates a way of keeping the trapped guy from being saved quickly.  The story of the man trapped in the cave gets bigger and bigger.  Will he get out alive? Soon curious onlookers flock to the location -- and so do newspaper and TV news outlets.  The cave site becomes a media circus that shows what can happen when the art of journalism goes to the dark side.  Kirk Douglas played the fame and fortune-hungry reporter, Chuck Tatum. 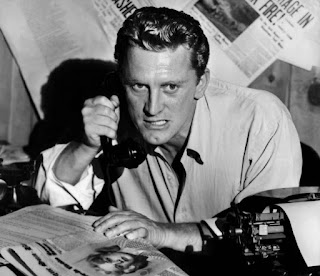 So, why do I recommend this as half of a double feature.  Soon after Chuck Tatum gets wind of the story, a married couple on vacation drives up to visit the site. 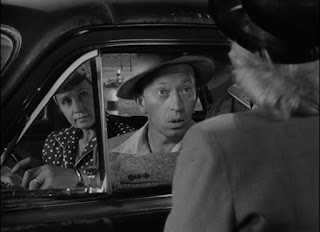 This couple is so eager to see the cave site they heard about...like it's the main attraction in that New Mexico town.  They're the first indicator that this story has legs.  When the TV news trucks arrive, the couple is still around.  The husband is not at all shy about being interviewed. 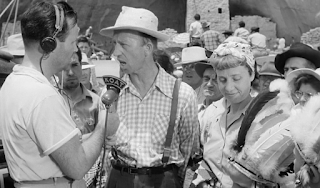 And he seizes upon the airtime opportunity to try to get a plug in for his business.  He works for....Pacific All Risk.  The same insurance company that Walter Neff worked for in DOUBLE INDEMNITY.

In his way, Mr. Federber (played by Frank Cady) seizes an opportunity using a man's 5-day crisis to increase his business -- just like reporter Chuck Tatum is doing.  Billy Wilder's ACE IN THE HOLE was 40 years ahead of its time.  It's one of Wilder's best and one of Kirk Douglas' best. 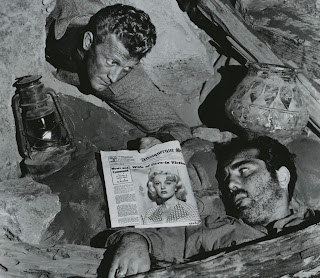 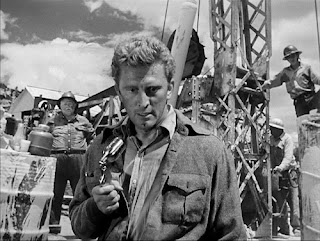 And there you have it.  My tip for a Billy Wilder DVD double feature.  Both films have the same insurance company.

A final bit of info about Fred MacMurray:  As I wrote earlier...maybe he wasn't a huge, famous Hollywood legend like a Gable, Bogart or Kirk Douglas, but his bank account probably made up for it.  Thanks to real smart real estate investments early in his film career, Fred MacMurray was one of Hollywood's richest actors.