What a marvelous, versatile actor he was.  Drama or comedy, he could do it.  The late Heath Ledger was born on April 4th.  Unexpectedly, he died in January 2008 at age 28.  His untimely death shocked fans all over the world and death robbed us of seeing him accept his Oscar for Best Supporting Actor. 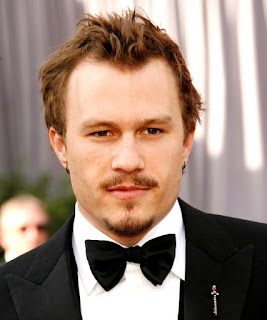 His posthumous Oscar came for his stunning, imaginative, memorable work as Joker, Batman's nemesis in THE DARK KNIGHT (2008). 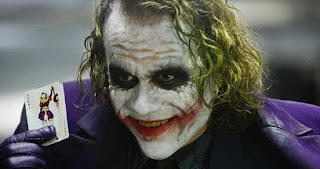 It was his second nomination.  His first came in the Best Actor category for his remarkable performance as the closeted married ranch hand in 1963 Wyoming who falls in love with another man.  The movie was 2005's  BROKEBACK MOUNTAIN.  That excellent film became a major arts item in our pop culture.  It came out during the "culture wars" and gay rights demands for equality during the Bush Administration.

Heath Ledger was Australian who was serious about his craft.  I hope folks don't forget him.  His two Oscar-nominated performances were not the only fine ones he delivered in his short but accomplished film career.

I was working on an ABC News production called LIFETIME LIVE.  It was a joint ABC News/Lifetime TV production, a live weekday afternoon show that used ABC news talent as contributors for some pieces.  It aired on Lifetime TV.  I was the weekly entertainment editor/film critic.  Jackie Collins was on promoting her latest novel.  I was reviewing THE PATRIOT, the Mel Gibson movie that had Mel as an early American family man forced to join the American Revolution and fight the Redcoats.  Heath Ledger played one of his children.  Jackie and I went on about how much we loved Ledger in it.  I felt that THE PATRIOT was okay and somewhat of a Mel Gibson vanity project.  Gibson did not need 2-and a half hours to play a Minute Man.  But Heath kept my attention.  Around that time in 2000,  Heath was on the cover of VANITY FAIR magazine.  In the interview, he talked about how he wanted to do challenging material.

And he was serious.  His next part was a supporting role in MONSTER'S BALL.  That performance really knocked me out.  He played the troubled prison guard son of a widower.  Son and father both work on Death Row in a prison.  Son, father and ailing grandfather live together down South and we see that the son wants to break away from the cycle of racism in his dysfunctional family.  The son is slapped by his father for showing compassion for a black inmate on Death Row.  This is the film that made Halle Berry the first and -- as of yet -- only black woman to win the Oscar for Best Actress.  It's also that movie that got Heath Ledger the role of Ennis Del Mar in BROKEBACK MOUNTAIN.  Watch MONSTER'S BALL and, in Heath's short supporting role, you will see why the BROKEBACK MOUNTAIN screenwriters said "That's our Ennis."

I want to recommend other films that showed Ledger's range.  One is a sort of "MTV Goes Medieval."  It's a fun movie to watch as a weekend pastime.  In 2001's A KNIGHT'S TALE, he plays a peasant who recreates himself as a knight. 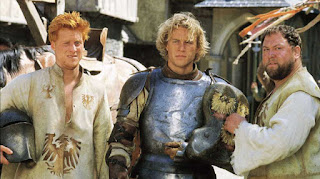 There's a lot of medieval action and, of course, romance in A KNIGHT'S  TALE.  A few critics commented that it was historically inaccurate.  Duh.  Did they notice the MTV hits played as background music?  Listen closely -- some of the medieval music being played is "Golden Years" by David Bowie, "We Will Rock You," by Queen and "I Want To Take You Higher" by Sly and the Family Stone."  This amusing movie came before MONSTER'S BALL.

Catherine Hardwicke directed a totally cool film based on a true story and real life characters in 1970s Southern California.  The 2005 film is called LORDS OF DOGTOWN.  It's about the young dudes who became stars of the surf and skateboarding trend in Venice, California.  Think of the fame Tony Hawk won for skateboarding skills.  The guys, called Z-Boys, were street kids who became celebrities.  Heath Ledger plays the retired surfer Skip Engblom. 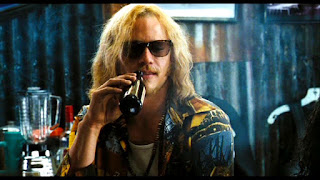 Skip is not a blond airhead surf dude.  He designs a new board that the young lords ride to celebrity status.  Skip is shrewd.  He understands marketing.  They don't.  I grew up in Los Angeles.  Heath Ledger was a like a young male Meryl Streep.  He absolutely nailed the Southern California accent in this very interesting story.  LORDS OF DOGTOWN is a fine look at what happens to an art form, if you will, when corporate influence replaces passion.  When you just do it for marketing and the money. LORDS OF DOGTOWN is a good movie. 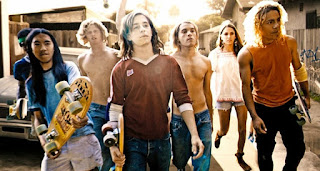 Also in 2005, we saw the release of two other films starring Heath Ledger.  These two showed him as a lead characters at opposite ends of the scale.  As Ennis Del Mar in BROKEBACK MOUNTAIN, he's the tough young man in Heartland America who doesn't say much, is in fear of expressing his true feelings, keeps to myself, and is secretly in love with another man.  He's a country guy, a ranch hand.  He's married and has kids.  Ennis does what society expects because he doesn't feel free enough to be his true self in the Land of the Free.
In CASANOVA, he's a flamboyant heterosexual who loves the ladies, chats a lot, and wears a shirt with puffy sleeves.  He cannot keep his feelings to himself.  He will romance any lady who lights up his libido whether she's single or married.  Even though he's straight, Casanova would be way too much for the residents near Brokeback Mountain.  Ledger is delightful as the famous lover.

Heath Ledger.  Truly gone too soon.  What a fine, fine character actor he was.  I miss him.