I have a deep love, appreciation and gratitude for the work of James L. Brooks.  This goes back to the diverse and inclusive ABC TV series he created about a high school.  That comedy/drama series was ROOM 222.  Next came THE MARY TYLER MOORE SHOW.  RHODA, LOU GRANT and TAXI are also in the writer/producer's TV credits.  He pulled a terrific triple play with his film adaptation of the best-selling novel, TERMS OF ENDEARMENT.  He wrote the screenplay, directed the film and also produced it.  Shirley MacLaine won the Oscar for Best Actress.  Jack Nicholson won the Oscar for Best Supporting Actor.  Brooks won Oscars for Best Adapted Screenplay, for Best Director and for producing the Best Picture of 1983.  He followed TERMS OF ENDEARMENT with another film that racked up some major Oscar nominations.  BROADCAST NEWS got 7 Oscar nominations including Best Actor, Best Actress and Best Supporting Actor.  James L. Brooks got an Oscar nomination for Best Original Screenplay and for producing an Oscar nominee for Best Picture of 1987.

Sidney Lumet's surreal, razor-sharp satire on corporations and the TV industry is a classic that deservedly gets a lot of attention.  That's 1976's NETWORK.  When the late Paddy Chayefsky wrote that original screenplay, he was not just a screenwriter.  He was a prophet.  BROADCAST NEWS, more about real-life situations in the TV news industry -- situations I've seen as someone who's been an employee on TV news programs and in the TV newsrooms -- holds up quite well.  Like classic episodes of THE MARY TYLER MOORE SHOW.  I watched BROADCAST NEWS recently.  Wow.  It still moves me.  Even more so now. 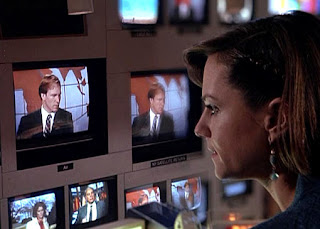 Just a few years ago, a very handsome and blond buddy of mine was working on a network morning news show that repeatedly turned me down for employment.  Oscar nominations were soon to be announced with some changes in Academy rules.  He knew little about Oscar history.  I was watching at home.  During a commercial break, I texted him a couple of facts.  A few minutes later, he was on the air saying the facts I texted him as if he'd been reading Oscar history for years.  I felt just like the non-handsome but highly-respected and skilled reporter Albert Brooks played in BROADCAST NEWS. 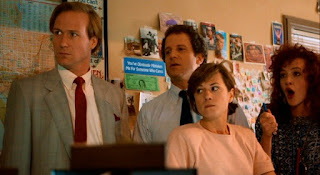 James L. Brooks was a guest on my VH1 show when BROADCAST NEWS was soon to be released.  What a great guest he was!  If I had a talk show today, I'd want him to come on and spend some time talking about his current views of TV news journalism.

In the interview, he mentioned that Jean Arthur -- one of classic Hollywood's best actresses -- was sort of a muse to him when he was creating/writing Jane Craig, the new producer character Holly Hunter played.  We also talked about a character whom he loved but the character wound up on the cutting room floor solely because his storyline made the picture run too long.  He was an openly gay producer and someone who had a lot of pull in the department.  Just like Aaron, the reporter Albert Brooks played, the gay male producer has his suspicions about the journalistic principles of the rather empty but ambitious and telegenic Tom Grunick, a new anchor played by William Hurt. 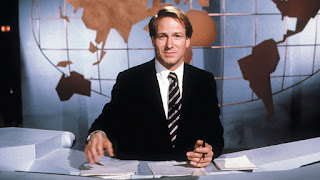 The gay producer sets out to flirt with Grunick.  He's not interested in him sexually and he knows Grunick is straight.  But he wants to see if Grunick is enough of an opportunist that he would flirt back knowing that the gay producer could advance his career.  This point about Tom Grunick's principles is made with his date rape news feature that Aaron questions.  He brings his questions up to the totally professional news producer, Jane (Holly Hunter).  If you've seen BROADCAST NEWS, you know the scene I mean. 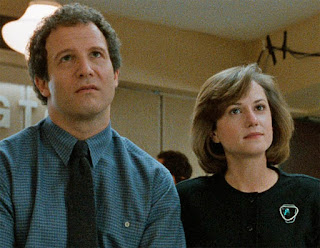 Grunick had no serious journalistic credentials or experience when he made his quick ascension in the anchor seat.  Said the vapid but clever Tom Grunick about his news job:  "I got this job on a fluke" and "Half the time, I don't get the news that I'm talking about."

On morning I was watching TODAY on NBC.  The hosts were chatting about BROADCAST NEWS and Jane Pauley commented seriously that the TV news business really doesn't work like it did in the James L. Brooks movie.  That was 1987.

In the early 1990s, WNBC local news in New York City hired an unemployed, handsome TV host.  Matt Lauer had been a host on an edition of the syndicated entertainment/lifestyles show called PM MAGAZINE.  His last gig before unemployment had been hosting a show out of New Jersey called 9 BROADCAST PLAZA.  That too was more entertainment and lifestyles than hard news.  Matt was an excellent entertainment host, not a veteran hard news journalist.

Apparently, women turned on to watch handsome Matt Lauer read local news with the same excitement that teen girls had watching The Beatles on THE ED SULLIVAN SHOW.  Bryant Gumble, TODAY Show co-host/anchor, liked Matt.  They became quick buddies and he helped Matt's career.  Matt worked hard, often co-anchoring the locals news in the morning, afternoon and evening.  He was polite, helpful... and lucky.  Bryant Gumble decided to leave TODAY for other opportunities.  Matt got the network upgrade.

In January 2017, Matt Lauer celebrated his 20th anniversary as co-host/anchor of the TODAY Show.

I worked with Matt at WNBC on a local weekend news program in 1992.  I quit in 1995 when my boss told me that, although my work was excellent and I was very popular with viewers, I'd only be a part-time weekend employee and I'd never move up to full-time employment and network exposure. Even though I'd had three years as a daily veejay and talk show host on VH1 from 1987 to 1990.  Followed by guest host work on a live CNBC talk show.

And there you have it.  BROADCAST NEWS.  A fine film.  One of my favorites.