Ingrid Bergman Behind the Wheel

THE YELLOW ROLLS-ROYCE does not get mentioned when Ingrid Bergman fans talk about her top classics such as CASABLANCA, NOTORIOUS, GASLIGHT, FOR WHOM THE BELL TOLLS, SPELLBOUND and ANASTASIA.  But my affection for her performance in this film grows and grows.  Not that looks are everything, but, man...she is an absolute babe in this movie.  The close-ups on her face make me swoon.  And she was nearly 50 when she made the film.  THE YELLOW ROLLS-ROYCE is a 1964 release that was made in England.  There's one car and we see how it effects the lives of three different owners.  So, it's like three shorts stories in one full-length feature.  The cast includes George C. Scott, Shirley MacLaine, Art Carney and Rex Harrison.  Ingrid Bergman and Omar Sharif star in the final story.  Ingrid Bergman, with her enormous acting skill and breathtaking natural beauty, had won the hearts of American moviegoers with her Hollywood debut in INTERMEZZO. 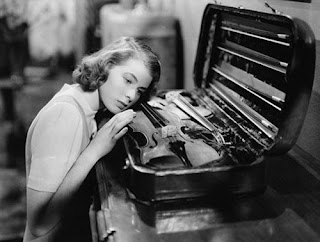 That 1939 love story starring Leslie Howard was a remake for her. 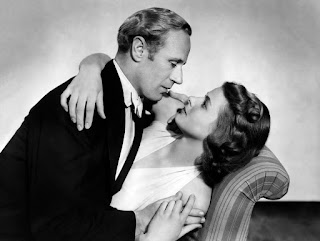 She'd been starring in Swedish films before her American onscreen bow.  INTERMEZZO was the Hollywood duplicate of her 1936 Swedish film of the same name.  Did you ever see Joan Crawford in the MGM drama called A WOMAN'S FACE?  Crawford played a facially disfigured woman who becomes a bitter, small-time criminal.  George Cukor directed the remake. 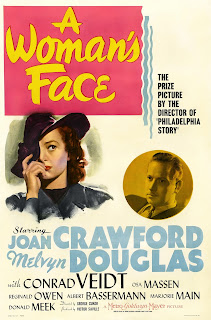 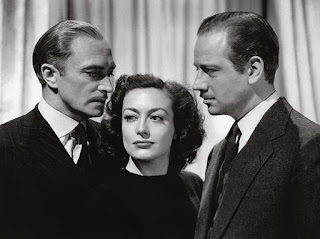 That 1941 Hollywood film was a remake of another Swedish film starring Ingrid Bergman.  In the 1938 foreign original, Bergman was a more of a bad-ass facially disfigured criminal.  She's the leader of criminal gang.  The gang members are all men. 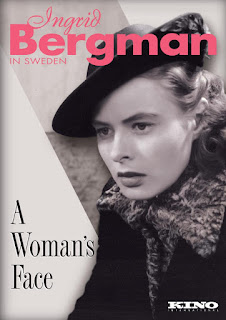 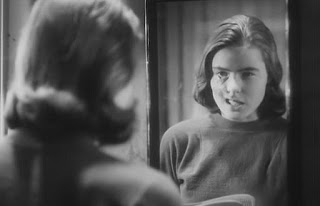 Ingrid Bergman was a master at screen drama.  Rarely did she get comedy scripts, but she certainly had the talent for comedy too.  You see that in THE YELLOW ROLLS-ROYCE.  She plays a wealthy American widow on holiday in a Europe teetering on the brink of war.  She seems totally uninterested in the severity of world events around her.  She has an assistant, a little dog, and a flowered hat.  She's chatty.  Bergman as the wealthy widow gives you the kind of fast-forward dialogue delivery that Carole Lombard and Rosalind Russell trademarked in comedies of the 1930s and 40s.  The thing about wealthy Gerda Millet is that she fools you in this comedy/drama.  She's more than her luxury items.  Before her story ends, she will join the Yugoslavian resistance against the Nazis.

Gerda chatters away, preparing to order a meal while others in the hotel pay attention to the news and prepare for war.  Omar Sharif as the desperate Davich overhears a conversation she's having as has an idea. He's an anti-fascist and needs to sneak into Yugoslavia to continue his resistance work.  She can get across the border in the car.  He hides in her car. 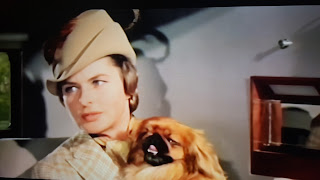 He thinks her little pet, her chic wardrobe and her car define she is.  Wrong.  As more and more of her strength, her fortitude and her selflessness reveal themselves, you see him fall in love with her.  When first they meet in the hotel, you see that the powerful and wealthy widow finds him attractive.  But she, out of propriety, tries not to make it obvious.  He is, after all, a younger man. 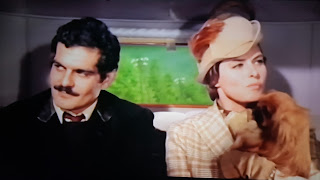 The character was a younger man.  Omar Sharif was a younger man.  Ingrid Bergman had been a Hollywood movie star ever since Sharif was an adolescent.  Omar Sharif was in his early 30s.  He'd clicked with American moviegoers with his performance in 1962's LAWRENCE OF ARABIA, a classic that brought the Egyptian actor an Oscar nomination for Best Supporting Actor.  Ingrid Bergman was a 2-time Best Actress Oscar winner -- and she'd go on to win a third Oscar. Again, she was nearly 50.  If Hollywood ever thought that a mature actress could not have a younger leading man, this pairing shoots that notion right out of the water.  The cool part is that the younger man really, really wants to kiss her.  Not just because of her beauty.  But because of her substance.  Her quality.  Her character.  She is not a flighty rich lady who emotionally keeps herself behind a wall with the upper class.  She is someone you'd want by your side in a crisis. 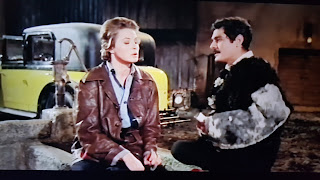 Watching Ingrid Bergman transform from one of "the ladies who lunch" into a resistance fighter fascinates me.  The transformation is so fluid, so seamless.  The underplayed romantic angle fascinates me too.  How could Omar Sharif's character not want to kiss her? 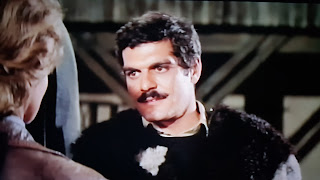 He makes the first move.   The car is a definite asset.  This time...she doesn't resist. 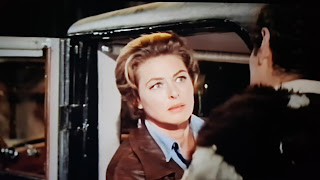 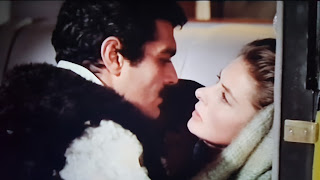 Give THE YELLOW ROLLS-ROYCE a look.  Remember, it's three episodes in one film -- and the Ingrid Bergman episode is the final one.  There is some classic Bergman this performance.  The restaurant scene when Davich informs Gerda that innocent people have been injured.  Bergman, looking elegant, holds a little dog and does some complicated, funny business with tablecloths while not missing a beat with dialogue.  Classic!