Forgive me if I come off like a classic film snob by writing this:  I can't believe that Humphrey Bogart did not get a Best Actor Oscar nomination for 1948's THE TREASURE OF THE SIERRA MADRE directed by John Huston.  Bogart was flat-out brilliant as Fred C. Dobbs, an American whose greed triggers his descent into paranoia and madness.  Dan Dailey got a Best Actor Oscar nomination for playing a vaudeville entertainer who hits the big time with his wife and then starts hitting the bottle too much.  The musical was WHEN MY BABY SMILES AT ME co-starring Betty Grable.  Not that Dailey wasn't a solid actor, but Bogart's performance in THE TREASURE OF THE SIERRA MADRE is master class material.  In my opinion. 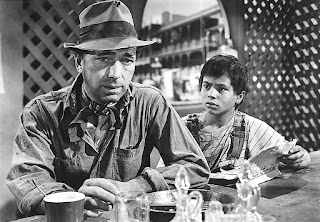 In the first 10 minutes of Huston's film, you see that Fred C. Dobbs is a down-on-his-luck guy in Mexico begging for change.  He wants something for nothing.  There's a little Mexican boy who also needs money but he's, at least, selling a good.  He's selling a lottery ticket.  Dobbs is physically mean to the little boy.  That humiliated kid was played by a member of "The Little Rascals."  He was played by actor Robert Blake. 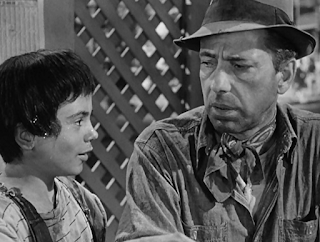 Blake was a case of a child actor who grew up to become a very good adult actor.  TV made him famous when he starred on a hit cop series as BARRETTA in the 1970s.

If Blake had ever received a couple of Oscar nominations for his film work, one should have most definitely been for his gripping performance as one of the killers in the film adaptation of Truman Capote's acclaimed IN COLD BLOOD. 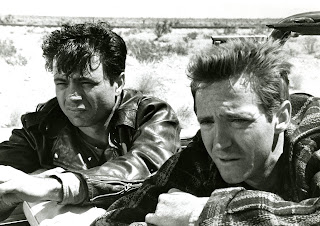 I feel that director Richard Brooks gave us one of the best American films of the 1960s with his black-and-white film adaptation.  Blake played Perry Smith, one of the two men who kill a Kansas family thinking that the family was wealthy and had a safe full of cash.  The two killers were caught, jailed and executed.  IN COLD BLOOD was writer Truman Capote's masterpiece and his account of a true crime that shocked a nation.  In the film, the other killer was played by Scott Wilson.  The veteran actor went on to play a wrong accused man in race drama/murder mystery IN THE HEAT OF THE NIGHT (Oscar winner, Best Picture of 1967), a cop in THE NEW CENTURIONS, a priest in DEAD MAN WALKING and he's probably more widely known now as Hershel Greene on the hit TV series THE WALKING DEAD.

In one scene,  killer Perry (Robert Blake) poignantly talks about his miserable childhood.  He mentions a movie with a scene that he loved.  The movie Perry talks about is...THE TREASURE OF THE SIERRA MADRE.

About THE TREASURE OF THE SIERRA MADRE -- Bogart didn't get a nomination.  John Huston won Oscars for Best Director and Best Screenplay.  His dad, Walter Huston, won for Best Supporting Actor.  The film was an Oscar nominee for Best Picture. 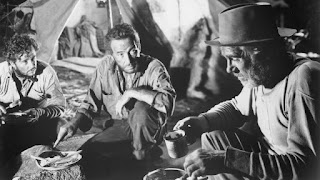 In all his years under contract at Warner Bros., Bogart got nominated for only one Warner Bros. release and that was CASABLANCA. His other Oscar nominations came for THE AFRICAN QUEEN and THE CAINE MUTINY.  Robert Blake has never been an Oscar nominee.

So, there's my Robert Blake Double Feature tip for you.  See him in THE TREASURE OF THE SIERRA MADRE and in Truman Capote's IN COLD BLOOD.
at April 06, 2017