When singers like Rod Stewart, Diana Krall and Michael Bublé release CDs of standards introduced in Hollywood films, you can always count on them to perform standards in our American Songbook introduced by Fred Astaire, Bing Crosby, Judy Garland, Frank Sinatra and Doris Day.  A couple of big stars who tend to be overlooked are Irene Dunne and Deanna Durbin.  These leading ladies were major stars in the 1930s and '40s.  And they sang.  One person who knows this is also a fine singer -- Broadway star Rebecca Luker.  The Tony Award nominee was delightful with host Terry Gross on National Public Radio's Fresh Air show.  Ms. Luker was a guest on Tuesday to tell us about her new CD and her love for songwriter Jerome Kern.  Added treat?  She sang. 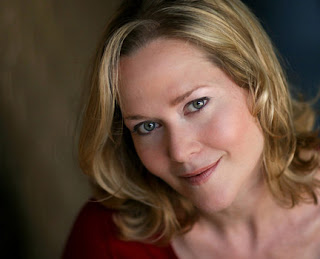 I was really jealous of Terry Gross.  I wish I could've conducted that interview.  Luker sings my late father's favorite song on her new CD, a salute to Jerome Kern.  Kern co-wrote new songs for Fred Astaire musicals.  My favorite is Swing Time, in which Astaire and Ginger Rogers introduced us to "Pick Yourself Up." 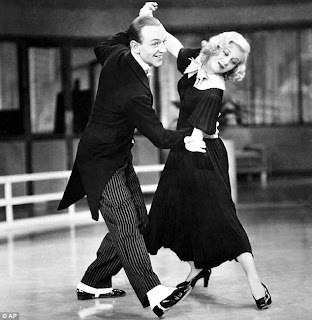 Another tune from Swing Time got Hollywood gold.  "The Way You Look Tonight" won the Oscar for Best Song of 1936.  Kern's lyricist for that score was Dorothy Fields.  Astaire and Rogers also starred in the 1935 film version of Broadway's Roberta.  So did Irene Dunne.  In that film, she sang Kern's "Yesterdays" and "Smoke Gets in Your Eyes."  She also sang a new number nominated for Best Song -- Kern's "Lovely To Look At."  Classic film fans today know Dunne as one of the brightest screwball comedy actresses of her day in movies like Theodora Goes Wild, My Favorite Wife and The Awful Truth. 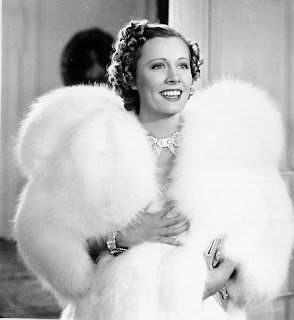 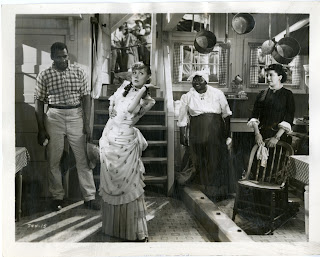 My favorite new tune is "I Have the Room Above Her," sung with co-star, Allan Jones. 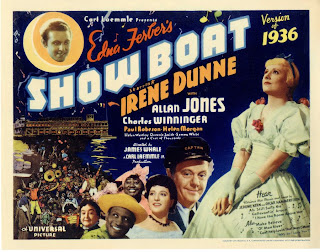 On her Kern CD, Rebecca Luker sings "The Folks Who Live On The Hill."  This was my late dad's favorite song.  It became a favorite with jazz artists and Dad was a jazz fan.  This Jerome Kern song was introduced by Irene Dunne in High, Wide and Handsome, a 1937 Paramount musical love story.  Luker gives the song a swingin' jazz lilt.  She really does it justice.  Dad would've dug it.  Irene Dunne would've dug it. 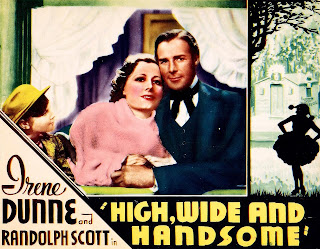 Irene sang it to Randolph Scott.  He was her leading man in Roberta too.  Lovely Ms. Luker also sings the title tune to a Deanna Durbin original musical comedy for Universal. 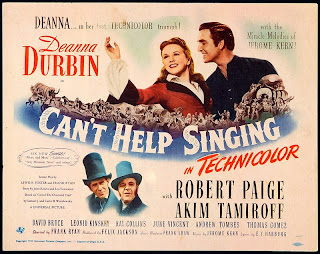 Just like Judy Garland, Durbin was a child star in the 1930s who blossomed into a major grown-up movie star in the 1940s.  She was classically trained and added an unforced sexiness to opera selections.  Durbin was one luscious babe with acting skills.  She was a pro at light comedy.  She and Judy did a short feature together as kids at MGM. Garland rose to became the top musical queen at MGM.  Durbin ruled at Universal. 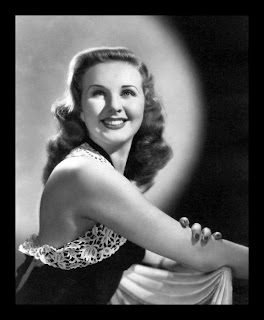 In Can't Help Singing, her only Technicolor musical, she introduced a gorgeous Jerome Kern love song called "More and More."  Oooh, baby, that's a good one!  Written with E.Y. Harburg, it was an Oscar nominee for Best Song of 1945.  Durbin, like Garland, stretched her talents by going dramatic in the mid-1940s.  In Christmas Holiday, she introduced movie-goers to the Frank Loesser song, "Spring Will Be a Little Late This Year." Her sunny image went to the dark side here.  It's yuletide film noir with Gene Kelly.  He plays a killer she loves.  She winds up singing in a bordello.  Merry Christmas! 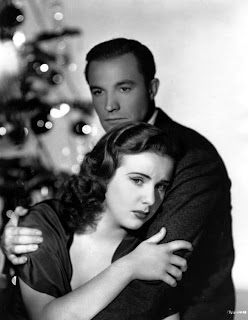 Irene Dunne did the role of Magnolia onstage in Show Boat.  So did Rebecca Luker.  I've discovered that music makes a great host or hostess gift when invited to someone's place for a party.  Or it can be a  birthday present.  Keep that tip in mind. And keep I Got Love (Songs of Jerome Kern) in mind.  This Rebecca Luker CD is a gift I'd love to get. 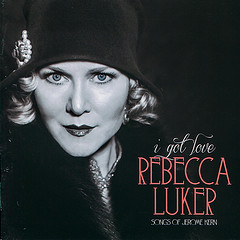 Rebecca Luker is married to fellow Tony Award nominee Danny Burstein.  He's appeared with Louis C.K. on his brilliant FX sitcom, Louie.  We've seen Danny on HBO's Boardwalk Empire and in the 2005 movie TransAmerica.  New York theatre audiences will be lucky enough to see him star in the Roundabout Theatre Company's Broadway revival of Talley's Folly.  The Pulitzer Prize-winning romantic comedy has February previews and opens on March 5th.  Danny got one of his Tony nominations for playing Luther Billis, the WWII sailor always trying to pull a fast one, in the acclaimed Broadway revival of Rodger's & Hammerstein's South Pacific.  Before its successful Lincoln Center run closed, one performance aired on PBS stations.  If your PBS station ever repeats it, make it a "must-see."  He was a younger, sexier, more aggressive and brawnier Billis than we're used to seeing.  (Think of Ray Walston in the 1958 movie version starring Mitzi Gaynor.) 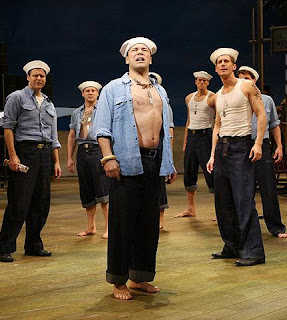 He was also a darker, tougher, complicated Billis.  More human.  Like other characters in South Pacific, he's not just fighting a war on the outside, he's at war with himself on the inside.  Watching Danny in that 2010 Live from Lincoln Center telecast, I had the same feeling I had when I saw John Malkovich play Tom, the brother to Laura Wingfield, in the 1987 TV adaptation of The Glass Menagerie directed by Paul Newman.  I felt, "This is the way the role should've been played all along."  He redefined it. 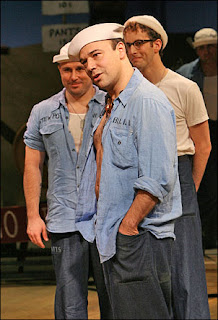 Enjoy the music.  To hear Rebecca Luker's breezy, warm chat with Terry Gross about her new CD, go the the NPR.org website, click onto the "Programs" section and link into "Fresh Air."