LES MIZ vs LINCOLN: The Ladies

Anne Hathaway and Hugh Jackman are both Oscar nominees for their performances in the epic musical drama, Les Misérables.  Three of the Best Picture nominees deal with slavery.  This is one of them.  We've got slavery and showtunes back in the years leading up to the June Rebellion of 1832.  Everybody's miserable.  You could call it DJean Unchained.  (The D is silent.)  Jackman plays Jean Valjean, once a slave full of hatred. Now he struggles to do a good deed for Fantine, the lovely and gentle French peasant.  Starving Jean Valjean was made a prison slave because he stole bread to feed poor loved ones.  After his release, angry at life, he learns a lesson in forgiveness after a kind bishop gives him a pair of precious silver candlesticks.  Jean Valjean is a changed man. 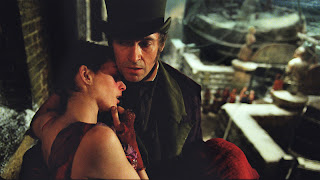 Fantine is practically a wage slave.  She has a terrible, low-income job with a factory boss who wants to have sex with her.  She loses her job and endures further degradation.  She has a little girl who needs money for care.  Not only is unwed Fantine forced into a life of prostitution in order to survive, she's given a bad haircut and then needs dental care. 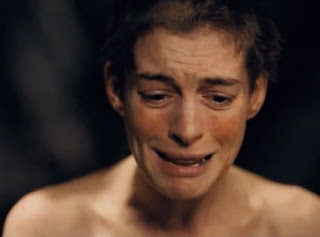 She sings her broken heart out.  All the French characters in Les Misérables sing their hearts out -- Jean Valjean...Javert, the obsessed prison guard who continues to hunt the ex-con...the crooked couple taking care of Fantine's child...the idealistic students who lead a revolt in Paris.  They all sing their hearts out.  But not a single one of them sounds French.  In fact, many of them sound like they fell out of the chorus in My Fair Lady.  It's like they're peasants on the Rue de Eliza Doolittle.  The candlesticks in Disney's Beauty and the Beast sounded more French than most of the actors in Les Misérables.  Couldn't director Tom Hooper have given Fantine, at least, a hint of Edith Piaf in her accent?

I know Anne Hathaway, winner of a Golden Globe and the SAG Award for this performance, is the favorite to win the Best Supporting Actress Academy Award.  I know that Oscar loves big musicals in which somebody dies -- The Great Ziegfeld, The King and I, West Side Story, Oliver! and Chicago -- but I wouldn't be surprised if there was an Oscar surprise on Feb. 24th.

If you read my November 2012 blog entry, "My Sally Field Day," you know that the former ABC sitcom star-turned-Oscar winning dramatic actress has long been a role model to me.  I have followed, learned from and been inspired by her unorthodox career during my unorthodox broadcast career as an African-American seeking the kind of TV opportunities I didn't see black talent get when I was a kid.  I'm not an actor of her caliber but I absolutely know how Sally Field felt when she repeatedly had to prove herself and fight for work that she wanted.

I saw her performance in Lincoln, another film that deals with slavery.  Wow.  Just...wow.  The Flying Nun was born to play this historical First Lady.  Mary is a complicated, educated Kentucky woman who is as passionate about the politics of the day as her husband is.  She is not an easy woman.  She has her emotional and physical pains.  They argue.  You have the feeling that she forges ahead with her political role at public events even when stricken with one of her many migraines.  You feel the years of their marriage.  Mrs. Lincoln has strong feelings about the abolishment of slavery.  She's also a mother.  She does not want to lose their oldest son in America's Civil War.  He wants to enlist.  They've already lost one young child.  She is not a passive First Lady to Abe Lincoln.  "You needn't tell me I'm right.  I know I am," she declares. 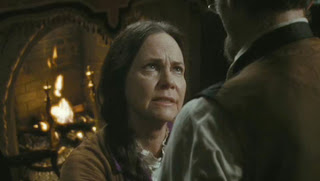 You feel the force that she is on him and in their political world.  Sally Field is powerful and magnetic in the role.  It's one of the strongest performances she's given in her film career.  She complements Daniel Day-Lewis' truly awesome work as Lincoln. 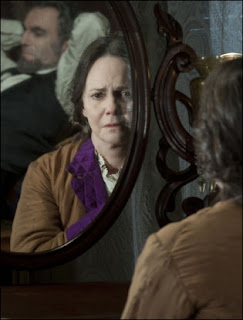 This marriage, with its fights and frustrations and its love, is the thing that makes Abraham Lincoln a real person in this movie and not just an iconic Great Emancipator in American history.  Sally Field as Mary Todd Lincoln keeps the president from coming off as good but unreal -- like he's the robotic Abraham Lincoln in the Disneyland exhibit.  The scenes with Mary make him a flesh-and-blood man who got support from and argued with his wife...and they show him as a father who had a fractured relationship with his oldest son.  Field has a political scene with Tommy Lee Jones.  That alone is worth the price of admission.

Don't be surprised if Daniel Day-Lewis and Sally Field both win their third Academy Awards later this month.  They are that good in Lincoln.