This is for you fellow classic film fans who really dig musicals. You know how sometimes, when you were having a meal at a fine restaurant, you needed a palate cleanser in between dishes? Something like a nice lemon sorbet? Well, with the pandemic and all the political news headlines last week, my spirit needed a lemon sorbet. I wanted a light, entertaining, Technicolor feature that ran under two hours. What a surprise that I found the perfect sorbet in a 20th Century Fox musical that I'd never heard of until this summer. From 1953, it's THE GIRL NEXT DOOR. Playing the title role is June Haver in her final big screen performance. She married the following year. The marriage was a long and happy one to actor Fred MacMurray. 20th Century Fox was famous for its Fox Blondes. There was singer/actress Alice Faye in the 1930s and champion ice skater Sonja Henie also in the 1930s. Betty Grable with her great gams plus her singing and dancing skills was a queen of the Fox lot through the 1940s. Then Betty's buddy, Marilyn Monroe, came in to be Fox's top blonde of the 1950s. June Haver became one of the new Fox Blondes in the 1940s. She was in the clever, patriotic time travel World War 2 musical entitled WHERE DO WE GO FROM HERE? The star was Fred MacMurray, her future hubby who possessed a good singing voice. Just like WHERE DO WE GO FROM HERE?, THE DOLLY SISTERS was a 1945 musical. A loosely based biopic, it would get one of those fabulous old movie lampoons years later when done by the company on THE CAROL BURNETT SHOW. In THE DOLLY SISTERS, Haver was teamed with Betty Grable. I watched Haver's musicals on TV. I liked her but she didn't give me that "bazazz" feeling I got from Betty. I think 1940s moviegoers felt the same way. Haver was talented and lovely but too mild for me, personality-wise. Her 1953 outing was different. Haver's final screen performance might possibly be her best. She delivers plenty of verve, along with plenty of musical numbers. I loved June Haver as THE GIRL NEXT DOOR. 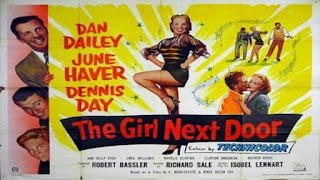 The movie runs 90 breezy minutes. It's a B-musical given an A-treatment. The screenplay was written by Isobel Lennart. She wrote the screenplay for Doris Day's best film, the dramatic biopic LOVE ME OR LEAVE ME (1955), the Ingrid Bergman drama, THE INN OF THE SIXTH HAPPINESS (1958), and FUNNY GIRL (1968) starring -- of course -- Barbra Streisand. 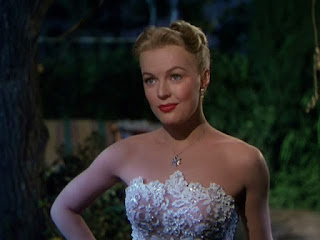 In THE GIRL NEXT DOOR, June Haver plays Jeannie Laird. Jeannie is a Manhattan chorus girl who works her way up to swanky nightclub headliner and then wants to cut back on her work load to have a real life. She wants a home in the suburbs where she can lounge in a backyard and throw dinner parties. During her first dinner party, she meets her next door neighbor. He's a widower dad played with refreshing charm by Dan Dailey. Billy Gray plays his little boy. Gray was the boy in the sci-fi classic, THE DAY THE EARTH STOOD STILL and he won TV fame as one of the Anderson kids on the hit sitcom, FATHER KNOWS BEST. The widower dad next door is a cartoonist for a New York newspaper. His comic strip is on the verge of being syndicated. The dad, Bill Carter, and the nightclub star, Jeannie Laird, fall for each other and the little boy gets jealous. But he'll learn to love Jeannie too. 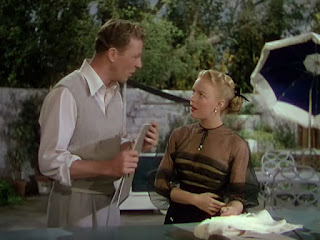 Dailey did duty as a Fox song and dance man in late 1940s musicals. Dailey starred in about three musicals with Betty Grable. They played husband and wife show biz teams and had nice chemistry. Dan Dailey, in musicals, could often overact and be too extra. Grable was keen in her ability to neutralize his hyper energy so it wouldn't eclipse her performance. Judy Garland did the same opposite Mickey Rooney at MGM. His success as a Fox song and dance man was solidified with his Best Actor Oscar nomination for 1948's WHEN MY BABY SMILES AT ME. In that, he and Grable starred as a husband and wife vaudeville team. The husband drinks too much. To some Hollywood folks, the nomination may have come as a surprise. Someone not in the Best Actor Oscar race? Humphrey Bogart for 1948's THE TREASURE OF THE SIERRA MADRE. (Laurence Olivier won for HAMLET.) Dailey dials down the overacting in THE GIRL NEXT DOOR and, in doing so, gives his character a nice warmth and depth. His more natural acting style here serves him very well. Then there's June Haver who drops the mildness of her previous films and makes Jeannie a vivacious lady whose nightclub stardom we can believe.

It's a fun little Fox musical. Haver, Dailey and Billy Gray mix well. The sidekicks are good. Dennis Day, launched from being the "boy singer" on the hugely successful Jack Benny radio show, has a supporting role. Similar to Rudy Vallee in THE PALM BEACH STORY, he's a likable nerd. The role fits him like a glove. His sweetheart, Jeannie's wisecracking best friend, is played by Cara Williams. Cara Williams was also a Fox veteran, a non-blonde, who worked up from being an extra. Did you see Gene Tierney and Clifton Webb in LAURA (1944)? When Waldo Lydecker goes to Laura Hunt's office to apologize and endorse her company's ink pen, look at the ladies at the desks behind Gene Tierney. One of them is Cara Williams. She'd get a Best Supporting Actress Oscar nomination for her dramatic role in 1958's THE DEFIANT ONES with Tony Curtis and Sidney Poitier. She'd sing and dance with James Cagney in 1959's NEVER STEAL ANYTHING SMALL. 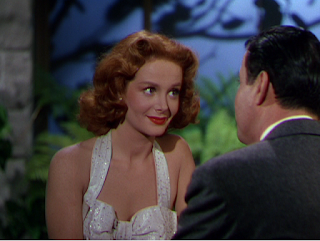 Not that any of the many songs in THE GIRL NEXT DOOR made it to the Billboard charts, but they're all enjoyable. The movie highlights what a good dancer Haver was. (Her singing is dubbed.) Dailey is in fine dance form and Billy Gray gets a couple of numbers. The dad's cartoonist occupation serves as a gateway for two very cool animated sequences.

THE GIRL NEXT DOOR starring June Haver and Dan Dailey. Is it TOP HAT, MEET ME IN ST. LOUIS, SINGIN' IN THE RAIN or THE BAND WAGON? No. Nonetheless, it is a colorful, cute, well-produced and well-performed early 50s Fox musical.
at August 13, 2020