This post has an item that may give you a few chuckles. In the history of Old Hollywood, actress Bette Davis was fearless and peerless. Look at some of varied and memorable dramatic performances in classic films she slammed across in her film careers. Films such as 1934's OF HUMAN BONDAGE, JEZEBEL, DARK VICTORY, THE  PRIVATE LIVES OF ELIZABETH AND ESSEX, THE OLD MAID, THE LETTER, ALL THIS AND HEAVEN TOO, THE LITTLE FOXES and ALL ABOUT EVE -- just to name a few. 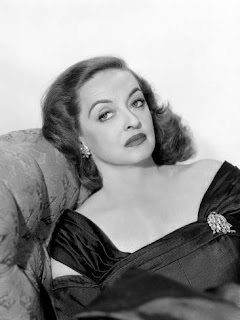 Bette Davis loved to work. But, when she was well into middle age, she did not love having to travel way out on location to shoot. 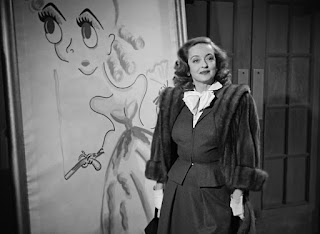 In my first professional on-air broadcast job, I was a reporter for a popular FM rock radio station in Milwaukee. One of my earliest assignments was to get a couple of soundbites from Bette Davis. The formidable film legend was in Milwaukee to promote her new film, 1978's DEATH ON THE NILE. Promote it, she did. During her time with local press, she mentioned that the only thing she "haaaated" about making the film was having to fly out the country to do location work. She preferred being in a studio. Like in her celebrated Warner Bros. days of the 1930s and 40s. By the way, I did get DEATH ON THE NILE story soundbites from Bette Davis to air on WQFM radio when the star and I sat just about knee-to-knee for a couple of minutes. 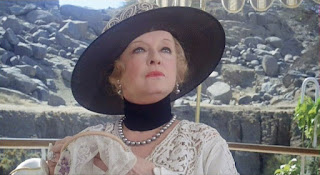 After her big film success with the 1962 psychological thriller, WHAT EVER HAPPENED TO BABY JANE?, a movie that brought the two-time Best Actress Oscar winner her tenth and last Oscar nomination, she went on to do a lot of good work as a guest star on episodic TV. She gave strong performances in made for TV movies. We saw her in 1976's THE DISAPPEARANCE OF AIMEE co-starring Faye Dunaway as evangelist Aimee Semple McPherson. There was 1979's STRANGERS: THE STORY OF A MOTHER AND DAUGHTER co-starring Gena Rowlands. Davis played a veteran flight instructor for director Ron Howard in 1980's SKYWARD and the topic of suicide among the elderly drove 1983's RIGHT OF WAY starring Bette Davis and James Stewart. By the way, Davis won her first Oscar for DANGEROUS (1935) and her second for JEZEBEL (1938).

Reportedly, she was greatly impressed with Lucille Ball's work situation. Ball was the CBS Queen of Comedy during the 1950s and 60s. Every week, Lucy could go to work at the CBS Studios in Hollywood, finish for the day and then go home to her house in Beverly Hills. That's the kind of life Bette wanted. She wanted the luxury of going to work at a Hollywood studio and then driving home to her family. With that in mind, Bette Davis did a 1965 sitcom pilot for producer Aaron Spelling of ABC. The script was written by Mart Crowley who'd later write the highly groundbreaking and influential 1968 off-Broadway play about gay men, THE BOYS IN THE BAND.

Mary Wickes was one of the best and most beloved wisecracking character actresses in film and TV. We loved her in 1954's WHITE CHRISTMAS with Bing Crosby, we loved her as a nun in 1966's THE TROUBLE WITH ANGELS and in 1992's SISTER ACT with Whoopi Goldberg. 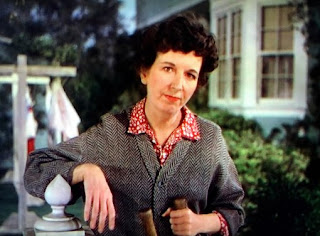 Wickes had snappy scenes with Bette Davis in NOW, VOYAGER (1942), THE MAN WHO CAME TO DINNER (1942) and JUNE BRIDE (1948).  Mary Wickes was Bette's sidekick in the sitcom pilot. Had it sold, TV audiences would've seen Bette Davis getting laughs as an interior decorator every week on ABC. Here's that unsold 1965 Bette Davis pilot for a half-hour sitcom.


Years later, Bette Davis did appear in an ABC TV series produced by Aaron Spelling. She was in the original cast of the hit series, HOTEL. The show premiered in 1983. Davis starred as the owner of the deluxe hotel in San Francisco. Early in production, she suffered a stroke and, understandably, needed time to recuperate. She was replaced by her friend, actress Anne Baxter. Yes, the same Anne Baxter who played Eve Harrington, the backstabbing rival to Broadway star Margo Channing in 1950's ALL ABOUT EVE. Davis decided not to return to the series. HOTEL aired from 1983 to 1988.

Bette Davis waged her own personal campaign to land the coveted lead female role in the 1989 film version of DRIVING MISS DAISY. Said Richard Zanuck, the film's producer: "We received many calls from Bette Davis. Rough calls. She was very forceful on the phone." See what I mean? She was fearless and peerless.