This year, 2020, marks the centennial anniversary of the 19th Amendment in America. The amendment to the Constitution granted Caucasian women the right to vote. It was a victory for suffrage and for democracy. There would be more work to be done to secure voting rights for Black and Native American women. Classic film fans have seen suffragettes in old Hollywood films. Look at the montage in the opening five minutes of KITTY FOYLE (1941).  Olivia de Havilland played a spunky suffragette in the comedy, THE STRAWBERRY BLONDE (1941). As a London wife and mother, Glynis Johns was a singing suffragette in Disney's MARY POPPINS (1964). Just like Olivia de Havilland in THE STRAWBERRY BLONDE, there was another spunky suffragette in another 1941 comedy. Loretta Young starred as THE LADY FROM CHEYENNE, a 1941 comedy western from Universal. Her leading man was the handsome Robert Preston. 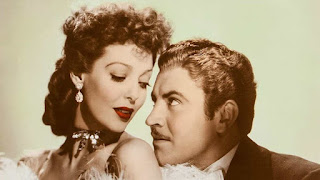 Is it a 4-star comedy like MY MAN GODFREY, THE AWFUL TRUTH, THE LADY EVE or SOME LIKE IT HOT? No. But it is worth a look for the suffragette angle and to see an upgrade on the kind of roles Black actors got in movies of that era.

Here's the plot: In the 1860s, a prim and proper Philadelphia Quaker schoolteacher gets an inheritance and heads west to Wyoming to open a school for youngsters. She's independent and pro-Abraham Lincoln. There's a selling of lots, real estate, and a scam is being pulled off during the sales. Edward Arnold, in the kind of role he mastered, plays the shady tycoon at the heart of this scam. He's also the tyrant who will oppose the freedom of the local press. Annie Morgan (Loretta Young) gets a deed, of course, and she gets her schoolhouse where she can teach kids about William Shakespeare and Robert Browning. The greedy tycoon is determined to control the water rights of Annie's schoolhouse. His control would deprive farmers of water. Steve Lewis (Robert Preston) is in on the tycoon's scam. He meets Annie. The schoolteacher is experiencing feelings she didn't have in Philadelphia.  "Square dancing and moonlight. Doesn't it sound romantic?" she says to him. We know that love will ensue. 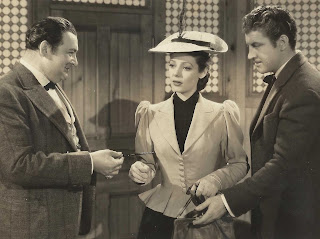 Annie has a quick and formidable temper as the men in the town saloon see for the themselves when she causes some damage. She gets a quick lesson in local politics in her quest to beat the town tyrant. She has to get a bill passed. Annie must proceed to support what one male character calls "that scatterbrained idea." That idea -- she lobbies for women to get the right to vote in the town's local elections. Politics is a new game to suffragette schoolteacher Annie Morgan.

Willie Best was one of those many Black actors constantly given racially stereotypical roles to play in Hollywood films. He was usually a slow-moving, uneducated janitor or elevator operator or porter. 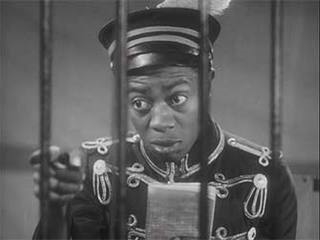 Many classic film fans will surely remember Best as the wide-eyed Algernon in the 1941 crime thriller, HIGH SIERRA, starring Humphrey Bogart and Ida Lupino, Rare was the film like the snappy 1940 mystery/horror comedy, THE GHOST BREAKERS, starring Bob Hope and Paulette Goddard. In that, Willie Best was the well-dressed valet/buddy to Bob Hope's character. It's refreshing to see the quality of scenes he gets with Hope and Goddard in the Paramount feature.

Willie Best plays George in THE LADY FROM CHEYENNE. George and Annie bond. George may seems to be mostly in a service worker role, but he has keen knowledge of politics and how they work. He knows how the game of lobbying to get a bill passed is played. George becomes to Annie what the Jean Arthur character was to James Stewart's newly-elected junior senator in Frank Capra's MR. SMITH GOES TO WASHINGTON (1939). Except for the romantic angle, it's the same dynamic. The insider tells the newcomer how the game of politics has to be played in order to take-down some town corruption. 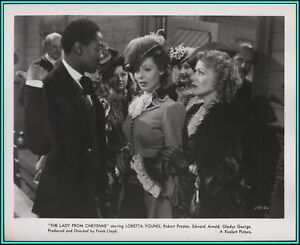 Loretta Young was a pro at comedy and she knows the right energy to keep this story afloat. She would win her Best Actress Oscar for another and better political comedy years later -- THE FARMER'S DAUGHTER (1947). In THE LADY FROM CHEYENNE, the Quaker schoolteacher from Philadelphia needs the help and support of other women. She must convince them that the bill for women's suffrage is "...one of the most controversial issues of the day."

The women she connects to, the women who give her advice and support, are the brassy and wisecracking saloon tootsies. They know the secrets of the guys who run the town. They give the movie a nice comedy zest. THE LADY FROM CHEYENNE may be one of the few old Hollywood movies in which we see an all-female jury.

Near the end, Annie walks over to her political mentor and says "Goodbye, George. And thank you so much for everything." She shakes his hand.

Considering the kind of roles Willie Best and other Black actors got at the time in Hollywood, roles in which their characters were presented as second-class citizens, that movie moment with Loretta Young was quite significant.  1941's THE LADY FROM CHEYENNE starring Loretta Young, Robert Preston, Edward Arnold, Willie Best, Gladys George and Iris Adrian runs 1 hour and 28 minutes. You may be able to find it on YouTube. And, yes, Annie Morgan is from Philadelphia even though the movie is called THE LADY FROM CHEYENNE.