With that state that the country is in nowadays, many of us need a hug. But, because of the coronavirus, there are new guidelines on how we must approaching hugging. This is a perfect time for feel-good features. They can be a great balm for our spirits as we emotionally recharge and gather up the courage merely to walk outside to mail a letter. If the postal system is still in operation. Anyway, I've got a feel-good feature for you. It's a documentary on Netflix. It lightened my heart to such an extent that I watched it twice. It's called MUCHO MUCHO AMOR: THE LEGEND OF WALTER MERCADO. 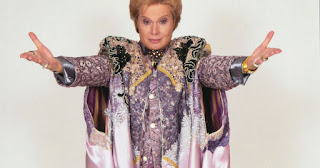 He was an international media sensation. A Puerto Rican astrologer with a Liberace-like flair in his attire. He had sort of an androgynous look and, frankly, resembled the kind of TV personality who would've been lampooned on SATURDAY NIGHT LIVE. Perhaps he was. I don't speak Spanish but I would watch him on Spanish TV because his charisma was so arresting. Besides having an enormous Spanish-speaking viewer audience here in the U.S., Walter Mercado was also highly popular in Latin America, Brazil, Italy, Holland and the United Kingdom. Then he disappeared. He was not on TV for a few years. We'll find out why.

He's interviewed in this documentary. He is the feel-good element. He takes us back to Puerto Rico in 1932 where his story began. He knew he was different and he knew he wanted to study the fine arts. He wanted to dance and act professionally. Which he did. In a very masculine, very heterosexual, very Catholic society, he realized he was about as butch as cotton candy. However, his loving and loyal mother said "to be different is a gift." 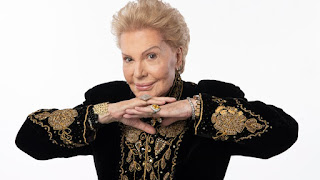 It wasn't that Mercado was seeking fame. Fame seemed to be seeking him. Back in his old Puerto Rican community, neighbors felt he had a special spiritual gift because of his way with animals. As an adult, in his TV years, he was asked to go on the air and give astrology forecasts. He did this in flashy garb and with the spiritual quality the folks in the old neighborhood loved. He was an immediate hit.

In his interviews, it's obvious that he's older and slightly frail. He'd been doing a TV show since 1969. You'd expect him to exude a slightly out-of-touch Norma Desmond in SUNSET BOULEVARD personality. Instead, he's pretty hip and engagingly pokes fun at himself and his image. One thing he was always serious about and that was the work. The work and especially his message of love and peace. Walter Mercado left a spirit of good will.

In his TV astrological forecast career, a young and clever -- and ambitious -- producer guided him to fame and fortune. He became like a son to Mercado. That same producer caused the financial and legal nightmare that took Walter Mercado off TV screens for a few years. He's interviewed and, honestly, it is a shock that he shows not one drop of guilt or remorse for what was basically identity and brand theft.

Walter Mercado could've understandably been bitter and angry in reliving that long, humiliating episode in his career. But he wasn't. There's an air of forgiveness about him. He gives off a warmth we sorely need in the world today. One of Mercado's many fans was Broadway wonder boy Lin-Manuel Miranda. Their meeting in the documentary is a heartwarming highlight.


Despite terrible things that happened to him contractually, Walter Mercado kept his spirit towards the light. He was a TV pioneer who broke through gender stereotypes, was truly committed to giving people hope and love, and he lived his life in a certain flamboyant state of grace. You'll feel like you spent 90 minutes getting to know a very dear person.

MUCHO MUCHO AMOR: THE LEGEND OF WALTER MERCADO was directed by Cristina Costantini and Kareem Tabsch.