This has been the cruelest year. Many of our hearts suddenly cracked and broke again Friday night when we read the news that actor Chadwick Boseman died. He'd been battling cancer since 2016. While battling it, he continued to work. A message on social media from those close to him read "It was the honor of his career to bring King T'Challa to life in BLACK PANTHER. He died in his home, with his wife and family by his side."  Chadwick Boseman, in his early 40s, died loved and appreciated -- probably loved and appreciated more than he ever knew. 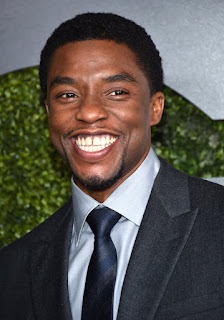 He was well-cast as baseball great Jackie Robinson in 42, a 2013 biopic addressing the racism Robinson faced in professional sports while he batted through segregation.

As good as he was, I felt Boseman was even better as singer James Brown in GET ON UP. Lord have mercy, he burned up the screen with that performance! I was in awe of his talent. I was proud of his talent. Viola Davis starred as the mother of James Brown. Octavia Spencer co-starred  The biopic was directed by Tate Taylor, the man who directed Viola and Octavia in THE HELP (2011).

In 2017, we saw Chadwick Boseman in another big screen biopic. In MARSHALL, the versatile young actor played the man who became the first African American Supreme Court Justice. He starred as Thurgood Marshall.


Even as recently as the 1980s, Hollywood's discriminatory notion was "Black stories don't sell." Director Norman Jewison, a successful Caucasian Canadian whose IN THE HEAT OF THE NIGHT won the Oscar for Best Picture of 1967 with Rod Steiger taking home the Oscar for Best Actor. was stunned at the top studio rejections he got when he wanted money to film A SOLDIER'S STORY, based on a Pulitzer Prize winning play. The rejection came because the story had a predominantly Black cast. Jewison offered to work for way less than his usual fee in order to raise money for the production. He got the movie made -- and A SOLDIER'S STORY, featuring newcomer Denzel Washington, was an Oscar nominee for Best Picture of 1984.

Magnificent talents like Cicely Tyson had to go to TV for steady work and good scripts. After her Best Actress Oscar nomination for her remarkable performance in SOUNDER (1972), Hollywood had no other scripts for the Black actress. No other lead role offers. She had to go to TV to play Coretta Scott King, Harriet Tubman and groundbreaking Chicago teacher Marva Collins. Collins' technique and dedication were covered when she was profiled on CBS' 60 MINUTES. Hollywood did not have such biopic opportunities for Black performers.

Chadwick Boseman starred in three big screen biopics and then he played a king in an action/fantasy that not only showed Africa as a rich and culturally advanced civilization, it had Black actors in the lead roles. BLACK PANTHER embarrassed old Hollywood creeds that "Black stories don't sell" by becoming a domestic and foreign box office blockbuster helmed by a Black director, Ryan Coogler.

The work of Chadwick Boseman made me feel so significant, so proud and so grateful to be alive to see it. I remember one weekend when the popularity and importance of BLACK PANTHER was in the entertainment headlines. TCM was airing old Tarzan movies for early Saturday morning fare. In those early 1930s adventures, Black Africans were never presented as intellectual or important. They were disposable citizens in their own land. They carried Bwana's British luggage on their heads during his journey to exploit their land. If they refused to follow his orders, he'd shoot them. Or they'd be the victims of angry gorillas. Or, in early Hollywood images of "Black on Black crime," they'd be killed by pygmy savages. Those pygmies were played by white actors in blackface. Around that time, the Orange Man in the White House had referred to Africa as "a shit-hole country" in conversation. Shining through and cutting through all that like a giant, golden sword was BLACK PANTHER starring Chadwick Boseman as King T'Challa. 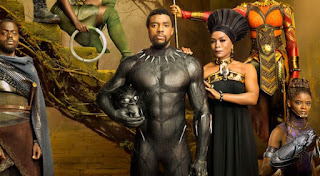 Angela Bassett co-starred with him in BLACK PANTHER. Upon hearing of his death, she wrote "This young man's dedication was awe-inspiring, his smile contagious, his talent unreal."

Millions of us loved and appreciated Chadwick Boseman. He had the spirit of a great king on screen and off. He used his time and his talents well.