This is post is about a lovely, brief moment I have in New York City with actor/director Kenneth Branagh one night. It's also an appreciation for the racial inclusivity he's long displayed in his filmmaking. 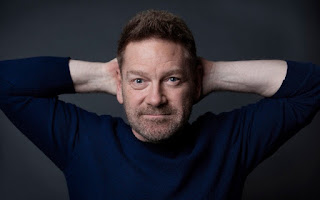 My article is also a reminder of why I'm so passionate about racial inclusion within the groups of arts critics -- film critics and theatre critics. If the field is predominantly white male, as the field of film critics on national TV has been for decades -- key elements will be missed or ignored. Race and gender inclusion in the critical conversation about the film arts, I believe, ultimately can be helpful to the filmmakers in their future work. Let me give you a couple of examples before I tell you about Branagh's new work. Tom Doherty is one of the film journalists I follow on Twitter. He teaches at Brandeis University. He was excellent on-camera giving historical observations in this year's PBS documentary about Mae West entitled DIRTY BLONDE. He's a white male. This week on Twitter, he wrote that he watched Quentin Tarantino's fine film, ONCE UPON A TIME IN HOLLYWOOD, for the fifth time. Doherty noticed something he had never noticed in his previous viewings. He noticed an "attention-to-period detail" in the long-barreled Buntline revolver brandished by the home invaders associated with Charles Manson. 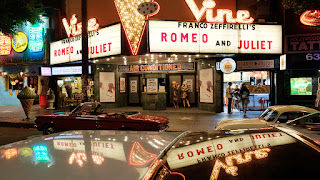 I didn't notice that. What I noticed was the lack of Black people as pedestrians on Hollywood Blvd. I grew up in South Central L.A. I still vividly recall listening to KMPC radio when the bulletin broke about the Sharon Tate murder in August 1969. I was teen-ager and I spent many summer afternoons on Hollywood Blvd taking in a movie, hitting record stores to buy new albums or browsing in bookstores that had well-stocked movie sections. I was not the only Black person walking up and down Hollywood Blvd or sitting at one of its bus stops to start my RTD ride back home. I attended a parochial all-boys high school in Watts. The student body was mostly African American followed by Mexican American. Our English Lit. class went on a field trip. The school took advantage of the student ticket group rates discounts offered by movie theaters. We all got on the bus, with our teacher, and went to Hollywood to see Franco Zeffirelli's ROMEO AND JULIET. The pic above is from Tarantino's film. That's right. Black and Chicano dudes, some with Afros like Linc's on THE MOD SQUAD, headed into a Hollywood movie theater to see a new film adaptation of a famous Shakespearian tragedy. With the late 1960s movie and music scene, there was plenty of Black youth on Hollywood Blvd. If I had been a film critic on TV reviewing Tarantino's film, I would have mentioned that. There are many Black and Latino members of Screen Actors Guild who could've worked as background actors in those scenes. I know. I'm a SAG member. I've worked as a background actor in a few movies.

Critics raved about the Coen Bros. 2013 film, INSIDE LLEWYN DAVIS. The drama focused on a week in the life of a young singer trying to make it in the Greenwich Village folk music scene of 1961. I hadn't seen the movie. I asked a Black friend of mine, an actor with a respectable list of TV and film credits, if he had. He responded that he had and the movie irritated him. He said, "Greenwich Village, the folk music scene, the 1960s and there's no Black people in it. Not even on the sidewalks." We both lived in New York City at the time.

I saw the movie because of what he said -- and he was right! There was no Black actor in a key lead or supporting role and I had a hard time finding Black people in the exterior shots on the sidewalks of the Village. Folk music and jazz -- two music scenes that were alive and kickin' then in the Village and Black talent was definitely involved. Writers Lorraine Hansberry and James Baldwin lived in the Village. The Civil Rights movement was in progress. INSIDE LLEWYN DAVIS gave us a non-racially mixed Greenwich Village. Again, if I had been a film critic on TV, I would've pointed out that fact -- a fact I don't recall any white critic addressing verbally or in print. 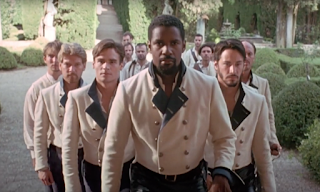 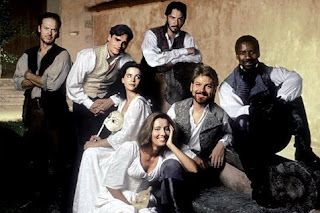 I was determined to thank Mr. Branagh and the Fates were kind. At the reception, I had the opportunity. He was standing alone, I walked over and introduced myself. I worked on a local morning news show at the time. I had a wonderful time seeing his adaptation of the Shakespeare comedy and I thanked him for casting Denzel Washington. I told him that, when I was a kid in school, seeing a reflection of myself in quality films on the big screen and TV, was most significant to me. It made my embrace of the arts wider. He beamed a warm smile and graciously replied, "That's what I was going for." He believed in the importance of racial inclusion and told me he planned to do more of that. Branagh kept his word. Critics may not have been keen on all his works but I, as an average moviegoer, will see his films because I appreciate his racial diversity and inclusion. In his works, we people of color are present. He sees us. His new film is a Hercule Poirot murder mystery I saw back in 1978 -- Agatha Christie's DEATH ON THE NILE with an all-star cast that included Bette Davis, Maggie Smith, Angela Lansbury, David Niven and Peter Ustinov. Kenneth Branagh stars in and directed a new version. Here's a trailer for the new DEATH ON THE NILE.