On THE ROOF from De Sica

Vittorio De Sica. What a master filmmaker that Italian director/actor was. I was introduced to his work by my parents during my youth back in South Central Los Angeles. Mom and Dad were another working  class couple in the community. He was a postal clerk working at the main post office in downtown L.A. Mom was a registered nurse. They both loved films, domestic and foreign. I was a little boy in the back seat of the family car, wearing my pajamas under my street clothes, delighted by the peels of laughter from Mom and Dad one night at the drive-in movies. They were watching De Sica's YESTERDAY, TODAY AND TOMORROW. They were tickled by the reactions from Marcello Mastroianni to the private striptease being performed just for him by luscious Sophia Loren. When TWO WOMEN aired on local TV, I knew that Sophia Loren won the Best Actress Oscar for her performance as the Italian woman trying to protect her daughters from the horrors of World War 2. I knew it was directed by De Sica. I was still a kid and I knew this thanks to mentions from Mom and Dad. When I went away to college and took film courses, one film we watched and studied in class was De Sica's classic, BICYCLE THIEVES. Experiencing Vittorio De Sica films has made for some of the happiest hours of my life. Have you heard of his 1956 film, THE ROOF? The Italian title is IL TETTO. 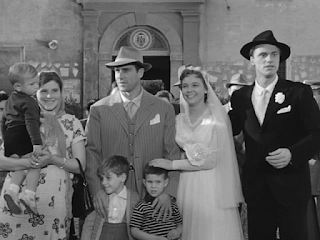 I watched De Sica's THE ROOF last night for about the sixth time since I first discovered it back in 2014. For about the sixth time, the final scene brought a tear down my cheek. Vittorio De Sica's THE ROOF is like a warm, reassuring hug from a dear friend when you're down and out. If you love BICYCLE THIEVES, I think you'll also find a special place in your heart for THE ROOF. 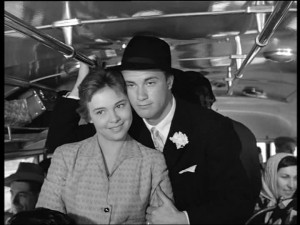 We go to post-war Italy. As the opening credits in this little black and white gem roll, we see laborers at work on a construction site. New residential buildings are being constructed. Luisa (Gabriella Pallotti) has just married Natale (Giorgio Lituzzi), a tall and lean young man with a cherubic face. The couple is so poor, the two don't have their own place on the wedding night. The bride had to borrow her wedding dress. They stay with relatives, sharing the same room with relatives. Some of the only time Natale and Luisa have alone is when he's pulling their few belongings on a cart as they take to the streets in search of an inexpensive room of their own. Natale hopes to find steady employment as a bricklayer. His brother in law could teach him more about that trade. 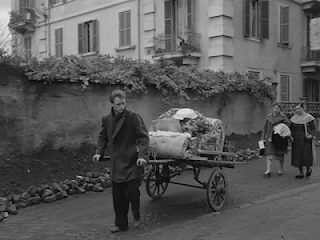 The newlyweds and the relatives who take them in are living hardscrabble lives. We see strength in the fact that the poverty never dents, never strains the love Natale and Luisa have for each other. Together they will endure.

Natale decides to build a house for them. A little "squatter's shack" in the outskirts of town. Literally on the wrong side of the tracks. He sees that other villagers have done such. His must be erected overnight when police are not present. A law states that any building with a roof cannot be torn down. With this law in mind, hopefully with the help of relatives and villagers, Natale is determined to build a one-room home -- with a roof -- for his bride. Can he do it? If he does, will the cops tear it down as they have done others?

A little one-room building with a roof, a structure the size of a backyard playhouse for youngsters in an upscale family today, would be heaven on earth for De Sica's newlywed couple. With today's massive unemployment and millions of working class Americans teetering on the brink of eviction, perhaps now is the perfect time to appreciate this classic foreign film.

I've long cherished Vittorio De Sica films because I feel that his Italian neo-realism reflected the spirit and specialness of my South Central community. I recognized how his unprivileged characters were push aside by society because of class and income. I love how De Sica showed that ordinary people are some of the most extraordinary people you could ever hope to meet. We meet two such characters in 1956's THE ROOF. A lovely film, it runs 1 hour and 40 minutes. 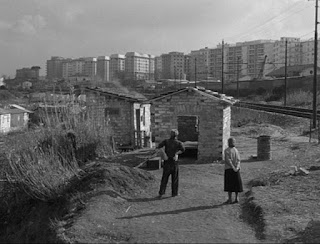 De Sica's THE ROOF (IL TETTO) is streaming on Amazon Prime. If you rent it, be sure to click onto the upper right-hand corner options and get the English subtitles. 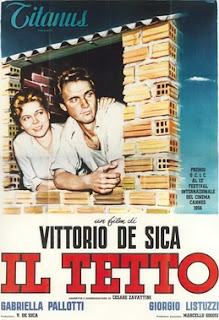