She was absolutely amazing. With her family, she moved from South Carolina to Harlem in New York City when she was a toddler. It was in Harlem where she grew to love playing sports -- especially tennis. Althea Gibson would go on to make sports history and break through a racial barrier in professional tennis. 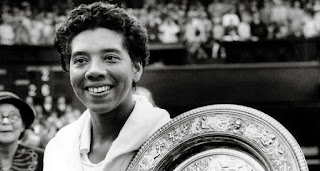 Future African American tennis greats such as Arthur Ashe and the Williams Sisters -- Venus and Serena -- would benefit from Althea Gibson's breakthrough. She was the first African American tennis player to compete at both the U.S. National Championships and Wimbledon. Gibson accomplished that in the early 1950s. Later in the 1950s, she won titles at the U.S. Open and Wimbledon. 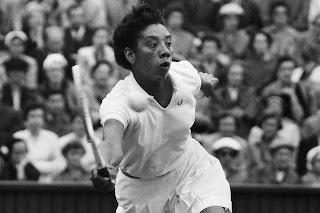 Take a look at this short PBS American Masters promo. 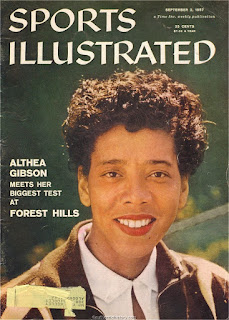 Hollywood gave her a short role in major movie starring John Wayne and William Holden. The 1959 release was called THE HORSE SOLDIERS. The story was set during the Civil War. The accomplished and internationally celebrated sports star played -- a plantation maid.

Did you know she could sing too?  She cut a jazz album in the late 1950s called Althea Gibson Sings. Let's take a music break right now with the tennis great singing "Because of You."