Young director Andrew Ahn has delivered a lovely, modest piece of work. It's a movie that features a performance from veteran actor Brian Dennehy who passed away recently at age 81. The film is titled DRIVEWAYS and paired Dennehy with the remarkable Hong Chau. She plays the single working mother overwhelmed by but handling a serious family matter. A heartbreaking one. She does this while keeping an eye on her lovable, soon to be 9, little boy. If you made it through a long, brutal winter, you know that feeling you get when taking a walk in the spring and you see green breaking through again on trees? You get the sweet sensation that warmth and color are coming back. That surge of joy to the heart is what you may feel watching DRIVEWAYS. Dennehy is obviously in the winter of his years here as he gives one of his final screen performances. He's physically slower. He appears slightly infirm due to age. This isn't the big bear Brian Dennehy of SILVERADO, F/X, TOMMY BOY and COCOON or Broadway's DEATH OF A SALESMAN. However, his talent is still sharp and true. 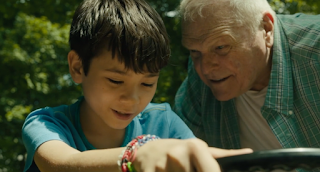 Hong Chau is an actress who doesn't get nearly the attention she deserves. She's a New Orleans native whose parents fled Vietnam in the 1970s. Hong Chau was marvelous in the sci-fi social satire, DOWNSIZING, a 2017 drama starring Matt Damon. It was cowritten and directed by Alexander Payne. Like a movie from the 1950s, DOWNSIZING commented on society by presenting characters in a community where people have been willingly shrunk to five inches tall.  They do this for a more comfortable life and to ease the world's over-population. The message of the movie is a good one. But, like a 1950s sci fi movie with shrunken characters, it should've run about 1 hour and 45 minutes instead of 2 hours and 15 minutes. It dawdled too long on the extensive shrinking process. The fire and soul of the movie really enter when Hong Chau does as the blunt, no-nonsense Vietnam war refugee. She's on a relentless quest to help others and be of service in the world. She's disabled. She has only one leg. That does not deter her. She is, to use an overused phrase, a force of nature. I prayed that Hong Chau would get a Best Supporting Actress Oscar nomination for that performance. She didn't, but she was definitely deserving of one. Last year, Hong Chau was seen on the HBO production, WATCHMEN, as Lady Trieu. 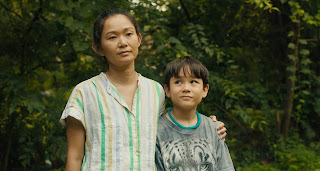 In DRIVEWAYS, Hong Chau stars as Kathy, a devoted and emotionally taxed working mom who hails from Michigan. She handles medical transcriptions. Because she works online, this gives her the flexibility to make a road trip with her son. She has her laptop and she can work on the road. Kathy's older sister died. Her sister lived alone in a house and, apparently, she had grown reclusive over the years. She developed a serious problem with hoarding that Kathy didn't know about. The two sisters had not visited each other in quite some time. Some emotional distance existed between them. The hoarding proves to be a shock to Kathy and Cody, her little boy. Kathy must deal with clearing out the house and preparing it to go on the market. She's heartbroken because some of her history is mixed in with her late sister's belongings. The cleaning out is like being forced to discard some of her own life, her own history. Del is the retiree next door. He seems to be a crusty old coot. Kathy, understandably, is wary when first she meets him because his initial contact was with Cody. All is fine. Cody likes Del. Eventually so does Kathy because he treated her sister with next door neighbor kindness.

We watch a warm, gentle friendship bloom between Del and Cody. Del lets Cody experience life at his own pace. Cody is relaxed and open with Del. Del is grateful for the companionship. It's something fresh and new, different from his usual weekly activity of playing bingo with other seniors.  Not much really happens in DRIVEWAYS. We see that it's about loss, letting go and moving on. The little boy and senior citizen widower friendship may remind you of the wonderful animated feature, UP. But DRIVEWAYS is different. It reaffirms that keeping in touch and reminding loved ones that they are loved are great gifts we must never forget to give.

Brian Dennehy is excellent in DRIVEWAYS. His final scenes in this movie are beautiful. Beautiful, poignant acting. No special effects. No car chases or fancy costumes Just a man sitting on a front porch and talking to a little boy about life.  Young Lucas Jaye is endearing as Cody. 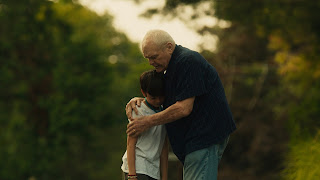