This is one absurd little black comedy. A French import, it's subtitled. There's the old saying, "The clothes make the man." In DEERSKIN, the clothes make the man...crazy. Psychotic, if you will. Remember THE ARTIST, the black and white Oscar winner for Best Picture of 2011? It's brawny and handsome French leading man, Jean Dujardin, took home the Oscar for Best Actor. Then we didn't hear much from him in connection to Hollywood films. A big man who is obviously most comfortable in his own skin, and actor skilled at delivering sophisticated drama and goofy comedy performances, it seemed to me that his Hollywood reps dropped the ball on utilizing his skills for American audiences. After THE ARTIST, he should've had an American film and TV exposure to make him as visible as Jon Hamm or Daniel Craig. He is a top star in France.  THE ARTIST, like the classic musical SINGIN' IN THE RAIN, takes place in the Hollywood of the 1920s when it was the brink of a historic revolution in technology. Sound had come to films. The silent era was over. Movie-making and movie careers would be instantly and drastically changed. Dujardin played the arrogant, selfish and highly popular silent screen star whose career may not survive the transition. He must learn humility, reinvent himself as a man and an artist. Besides being in black and white, THE ARTIST is mostly silent like films of the 1920s. Dujardin is exceptional. He deserved that Oscar.  DEERSKIN is not as satisfying. It's a different kind of film. However, it does remind you that Dujardin is quite a presence onscreen. He's a good actor. 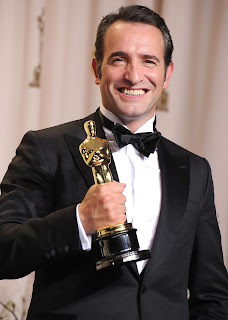 In DEERSKIN, Dujardin again plays a member of the film industry. Or so he claims. 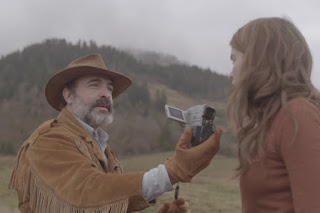 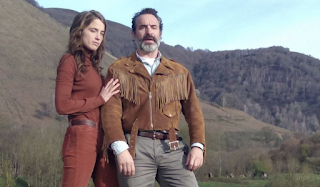 In DEERSKIN, he's a middle-aged man who's recently divorced. For some reason, he's obsessed with owning a vintage deerskin jacket. He purchases one and desires to be the only person who wears it. He wishes no one else in the world wore a jacket. Just him. The film opens with a few folks vowing to never again wear a jacket as the discard the jackets they own. He's purchased the jacket. He's basically broke and heads to a little alpine village inn. His masculinity is now on the wrong road. He's a big irresponsible macho shithead who hears the jacket talking to him when he's alone in his room/ Yes, the jacket speaks to him. At the nearby bar, he's having a drink and spins this tale that he's a filmmaker working on a project. The young slacker female bartender buys him a drink and buys his story. Her dream is to be a film editor. She wanted to re-edit PULP FICTION. She gets him money while he gets even more irresponsible and starts stealing people's jackets. Those people also believe he's an indie filmmaker. The deerskin makes him, in a way, a movie director who is a crazed hunter in lunatic fringe. Here's a clip.

DEERSKIN, in its last act, provides you a big "What in the hell just happened?!?!?" moment.

It's interesting to watch the dynamic between Georges, the fake director, the young female bartender. She's not as gullible as he may think. In her way, she knows how to get a project funded and on its feet. She knows what a film needs. When it comes to filmmaking, the female is smarter than the macho monster director. Unlike the 1920s actor Jean Dujardin played in THE ARTIST, the alleged modern-day movie director in DEERSKIN lacks humility. Also, he demented. He believes he owns a talking jacket. He lies to the editor but she gives him a fabulous deerskin gift to complement his jacket. They are collaborators. In this weird tale of masculinity gone awry, we just hope Georges won't flip out and lock her in the trunk of car the way he did other people's jackets. DEERSKIN was written and directed by Quentin Dupieux.

For information on where you can see DEERSKIN, click onto this link:  Deerskinmovie.com.

If you never saw Jean Dujardin as THE ARTIST, do so. He's worth watching in it.