It's a twisted Italian import. There are scandalous sexual situations, attempted murder and fabulous daytime housedresses. The movie has a generous sprinkling of influence from Douglas Sirk melodramas of the 1950s such as ALL THAT HEAVEN ALLOWS and WRITTEN ON THE WIND. The nifty set decoration has the colorful palette of a movie homage to Douglas Sirk such as FAR FROM HEAVEN starring Julianne Moore. Just like Moore's character in that film, this lead character is a housewife in a suburban American dream home of the 1950s. This subtitled film is FAIRYTALE and the lead female character is -- Mrs. Fairytale. 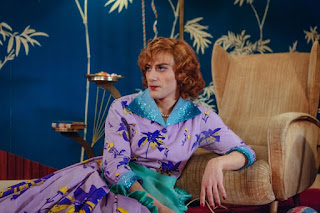 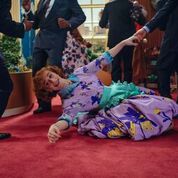 Mrs. Fairytale has a friend who drops over constantly -- like Agnes Moorehead in ALL THAT HEAVEN ALLOWS and Patricia Clarkson in FAR FROM HEAVEN. Emerald is her friend. 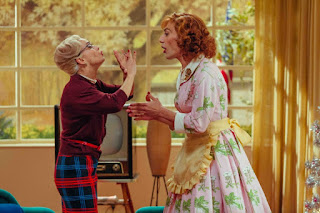 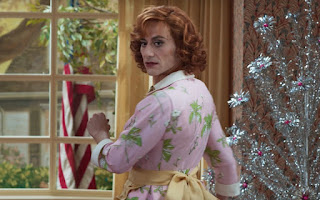 If Mrs. Fairytale looks a bit sturdy, somewhat on the big-boned side to you, you're right. Italian actor and playwright Filippo Timi. FAIRYTALE is based on a play he wrote and performed. The film was directed and co-written by Sebastiano Mauri. The director is Mr. Timi's husband. This comedy is about freedom, the freedom to live and love freely. The freedom to be one's authentic self. 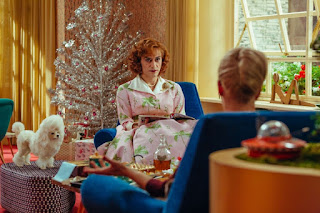 If you liked the 1978 hit film, LA CAGE AUX FOLLES, it's 1996 hit American remake, THE BIRDCAGE starring Robin Williams and Nathan Lane, and the 2003 hilarious indie comedy, GIRLS WILL BE GIRLS, I think you'll enjoy this 90-minute feature. Script-wise, it's not as smooth as those three movies but Filippo Timi's truly funny and inspired performance as the housewife carries it. Filippo Timi is terrific. He's comedy gold having high drama in high heels. He's not a drag queen lampooning a 1950s white American housewife in the suburbs. He is that complicated housewife. At times, he looks like an Italian TOOTSIE. When Mrs. Fairytale holds up her stuffed poodle for Emerald to admire, Emerald remarks "She looks alive -- like you." There's an umbrella stand by the front door of her house. But, instead of umbrellas, it holds shotguns -- because upscale suburban folks in the 1950s America cherish their second amendment rights to bear arms. Outside one window, we see a huge American flag waving in the front yard. There's a Christmas tree -- a fake silver one -- ready to welcome the holidays. We learn that Mrs. Fairytale considers Doris Day to be "the greatest actress of all time." From Emerald we learn that Mrs. Fairytale is occasionally struck by her brute husband. We learn that a UFO presence has altered something in Mrs. Fairytale's sexuality. We see Mrs. Fairytale's desire when she's with a younger man and mambos like Dorothy Malone in WRITTEN ON THE WIND.  We get more dramatic domestic revelations when a distressed Emerald comes over -- and she happens to be dressed exactly like Kim Novak as Madeleine in Hitchcock's VERTIGO. The story gets a tad too surreal for its own good in the last act, nevertheless Timi is worth watching. Here's a trailer.

FAIRYTALE has a DVD and VOD release date of May 12th. The storyline gets bumpy but the acting is good. There needed to be some color in the subtitles to make them stand out. They're low on the screen and so white that they're occasionally hard to read. I'll be watching it again because Filippo Timi made me laugh -- and I really needed to laugh. Thank you, Mr. Timi. 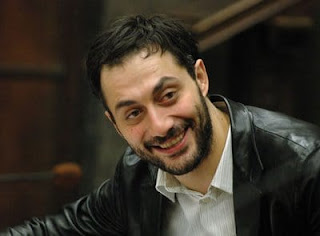