It's absolutely absorbing. That's how I feel about this HBO drama starring Hugh Jackman and Allison Janney. This is a tale of integrity, morality and America's regard for the educational system, specifically its treatment of teachers. As I watched BAD EDUCATION, there were moments of revelation in the story when I thought my slack jaw would drop down to my shoes with a clunk sound like I was a character in a 1940s Tex Avery cartoon. The revelations were that unexpectedly stunning. The most stunning thing about BAD EDUCATION is that it is based on a true story. A high school in Long Island, New York was the victim of a huge financial with a sum that seems to get bigger and bigger as the story progresses. The crime story was picked up by local TV news and print outlets. Just like the movie HUSTLERS, starring Jennifer Lopez, BAD EDUCATION is based on an article that appeared in New York magazine. Are you ready for another stunner? The original news story was broken by a student who wrote it up in the high school newspaper. Yes, the same high school that was bilked out of buckets of money. Only in America. 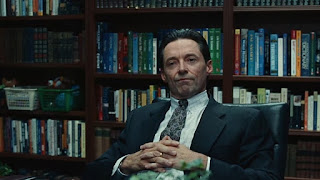 I won't give you many details about the movie because I don't want to rob you of the kind of surprises I experienced while watching it. I will tell you this up front -- if BAD EDUCATION was a theatrical release, Hugh Jackman would be getting Oscar buzz for his lead role performance. Jackman plays Frank Tassone, the school superintendent who is loved by students and staff alike. We learn that he's a widower. His wife died two years ago. Frank still wears his wedding ring. He's an attractive middle-aged man and we see that at least one middle-aged woman in his book club would rather hold him that the book by Charles Dickens that they're reading. He makes time for students and fellow staff members. He even makes time for aggravating, self-absorbed parents who overstep boundaries to get special treatment for their kids. This we see in the character of Mrs. Carol Schweitzer. She acts as though he's a designer she hired to make a special dress for her to wear at a red carpet Long Island function. He made the dress. She wanted a few changes and alterations done on the dress at the last minute. And then she wanted a major discount on her bill.

Allison Janney, in a pitch perfect performance, stars as the assistant superintendent, Pam Gluckin. Pam and Frank are friends. She knows that one of the women in the book club has a crush on him. We see Pam throwing a weekend summer party and we can't help but notice the pool and the cocktails. It's like a pop star's home. Then we notice that certain charges, purchases of items that are more personal than scholastic, are being charged to Pam's credit card intended for school purposes. Shady things are happening with the receipts. Funds are being embezzled. Pam is greedy. The greediness could result in a sticky situation for Frank, her boss. Scandal could soil the school's reputation. It's in the No. 4 school district in the country with more admissions to Ivy League colleges than ever. That fact makes ambitious parents drool. Imagine the bragging rights parents could have if their kid got admitted to a toney college.

Superintendent Frank makes time for a student from the school newspaper. She's doing a report on a school-related fixture. She puts a tape recorder on Mr. Tassone's desk and asked for a quick soundbite on the projected fixture. Her gives her one and she's satisfied. After she tells him that it's just a fluff piece, per the paper's editor, he motivates her to ask a follow-up question and basically says to do some homework and regard it as more than fluff.

She takes his advice and challenges her male high school newspaper editor. She goes into the school archives to check public record documents. When she notice that some healthy sums of money are going to other places and not to things like the repair of severely damaged and leaking ceilings in the school and administrative offices, she gets a fire inside to do more independent homework on this "fluff" story. Rachel, once a blank-eyed student, transforms into an eagle-eyed, steely journalist.

Pam's greediness is exposed. Frank has to ask his friend for her resignation. But wait, there's more. Mr. Tassone's motivation has made Rachel into a journalist whose investigations will lead to a bigger story. Geraldine Viswanathan is most impressive as Rachel.

I'm a Hugh Jackman fan. I've seen him on Broadway in a musical, on TV and in films. Jackman is a definite triple threat talent. Someone who can sing, dance and act. This role, as a man swept up in a twister of greed and corruption, is one of the juiciest roles he's had in year -- and he's excellent in it. If you get HBO, look for BAD EDUCATION.
at April 27, 2020