When I lived in New York City while I worked on local and network TV, I saw actor Chris Meloni frequently at the gym. I won't divulge the name of the gym. I will reveal that he was always one of the most pleasant customers on the gym floor. New Yorkers are excellent at respecting the personal space of celebrities in public -- mainly because the sight of them was pretty much a daily occurrence in our everyday lives. Meloni would enter with a rather boyishly innocent smile, nod back if you nodded at him, and go about his business. A couple of us other gym members loved to notice the way he walked into the gym. If he walked in with a macho swagger and a bit of a swivel in his hips, we figured he was shooting OZ for HBO that week. If he walked in with excellent posture and in a business-like manner, such as you'd see in a lawyer approaching the judge's bench in a courtroom, we figured he was shooting a LAW & ORDER show for NBC that week. Another thing -- if you were a chubby middle-aged guy resembling a Jack Black character and you were struggling with a barbell, Chris Meloni would spot you. I saw him do that more than once. The actor is not only a hunk. He's a mensch.

That does not surprise me. My side gig, during my post-VH1 years, was working behind the counter as a clerk in an independent video store. This was in the late 80s to early 90s in the Chelsea section of Manhattan. The store was called Video Blitz and it was directly under the Chelsea Gym on 17th & 8th Avenue. I absolutely loved that part-time job, the fellow staff members and many of our customers. This was back in the days of VHS tapes. A few of our regular customers became regulars on OZ. We were located in an area that had several casting offices and talent agencies at the time. Those actors who played killer convicts on OZ were some of the nicest Video Blitz customers we ever had. They were polite and friendly. They always returned their videos on time and rewound. I think Meloni may have worked at the reception desk upstairs at the gym in those days. If so, we both had the same boss. 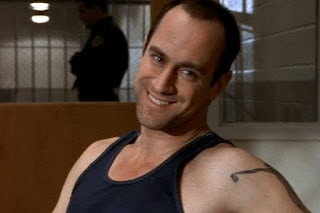 This week, it was announced that Chris Meloni will star in a new network TV project. His Elliott Stabler character from LAW & ORDER:SVU is getting a spin-off series. On Twitter and Facebook, this news made the heart of every gay man take wing and it made every gay man's hormones start spinning like they were in those giant teacups at Disneyland. 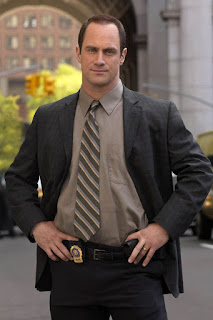 The actor definitely has millions of fans of all ages, color, shapes, sizes and sexual preferences who have followed his work on TV for quite a few years. Mr. Meloni is a remarkable actor, one whose versatility can often escape people. I want to recommend you see one of the best Chris Meloni performances that you probably never saw. It's in the 2014 drama, WHITE BIRD IN A BLIZZARD directed by Gregg Araki who also wrote the screenplay. Chris Meloni is absolutely terrific as the passive husband and father who has been dulled by a lifeless marriage. Shailene Woodley stars as his 17 year old daughter. Eva Green plays the unsatisfied wife and mother in the 1980s suburbs. If you saw the classic Joan Crawford film, MILDRED PIERCE, there's a bit a Pierce vibe when mother and daughter seem to be romantically interested in the same man. The lives of the daughter and her mustached dad fracture when mom disappears. 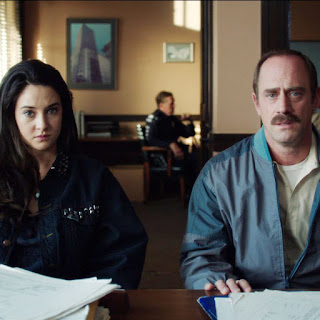 WHITE BIRD IN A BLIZZARD has supporting role performances from two Black women who were once -- and only once -- Best Actress Oscar nominees. They are the wonderful Angela Bassett and the equally wonderful Gabourey Sidibe, star of 2009's PRECIOUS. If you saw Sidibe's Oscar-nominated performance as the abused high schooler with severely limited reading and writing skills in PRECIOUS, you'll be stunned seeing her in this drama. Here, she plays a rather sophisticated, smart, popular high school student who's pretty much a 1980s Valley Girl. She's the exact opposite of PRECIOUS in WHITE BIRD IN A BLIZZARD and you will wonder why Hollywood isn't sending good movie scripts her way. 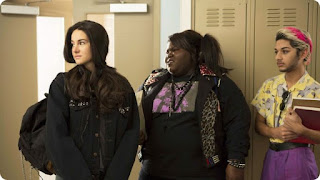 But, then, we know why. She and Bassett should have more than one Oscar nomination to their credits.  I won't tell you more about WHITE BIRD IN A BLIZZARD, based on a novel of the same name. I don't want to spoil its impact. The mystery drama is 90 minutes long. Here's a trailer.

Is this is great film, a classic movie about teen obsession and coming of age? Was it highly praised by many top critics? No. But it's not bad. There are good things to experience about this film. One of those things is watching Chris Meloni stretch himself as an actor and take on a different kind of role -- one that challenges the brawny, assertive, formidable men he's played on TV. He's quite good.