If you asked a dozen reputable film critics to list the top five film directed by Mike Nichols, 1967's THE GRADUATE would take the number one spot on several of those lists. I'm sure of that. THE GRADUATE -- starring Dustin Hoffman and Anne Bancroft. Mike Nichols deftly guided Hoffman's impressive acting skills in this film, made early in Hoffman's film career. To me, the most interesting character is the financially privileged and morally bankrupt Mrs. Robinson. 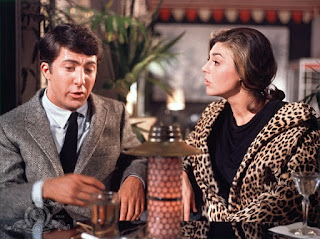 Mrs. Robinson has made her Southern California home her suburban jungle. She's like a clever, dangerous jungle cat toying with a clueless, little stray animal before she pounces. Look at the detail in the set design coupled with her outfits and attitude.

She's a jungle cat on the prowl. 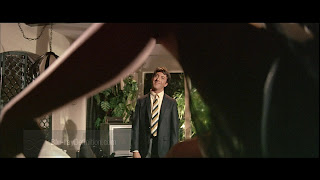 There are lines of dialogue in THE GRADUATE that went on to become famous in our pop culture.

We are all in a time right now that makes us feel as if we're characters in an original episode of THE TWILIGHT ZONE. On Valentine's Day, we could go to the movies with a date, hug, kiss, grab a bite to eat at a restaurant and go home. That's not the case today. We must keep six feet away from each other in public. If we go out. We must practice self-isolation because of strange, dangerous virus. A virus that has closed movie theaters, Broadway shows, restaurants and gyms. This prompted many Americans to rush out and buy large packages of toilet paper as if toilet paper as if would not be manufactured again for another month. Network news reporters asked us not to horde toilet paper.

Watch this well-known scene from THE GRADUATE.

If I was making THE GRADUATE today, I would replace with word "plastics" with ---- "bidets."

But that's just me.  I wonder if those fixtures will surge in popularity when this virus crisis fades. Maybe I could open a shop and sell them in a side business. Call the shop something cute like "Bidets of Our Lives" or "Bidets of Wine and Roses"

In the meantime, you take good care of yourself and your loved ones.
at March 29, 2020