If you're a guy and you are in coronavirus isolation with a male buddy roommate, THE LIGHTHOUSE may not be the film for you to rent and watch right now. It's bleak and it's in black and white. However, it has some blistering and brilliant acting from Willem Dafoe and Robert Pattinson. The 2019 film was directed by Robert Eggers. In addition to directing, he co-wrote the original screenplay. Eggers has a great interest in mythology -- especially Greek mythology. THE LIGHTHOUSE is the quality of film one would be assigned to watch and study in a university film class -- like I had to do Ingmar Bergman classics of the 1960s when I took film classes at Marquette University in Milwaukee. The main object in the film is a huge phallic symbol with a light atop it. I assume the phallic symbol is uncircumcised because there's never a shade or cover over the light. At one moment inside this giant phallic symbol, we find two bearded men embracing in a slow dance. But this is not BROKEBACK LIGHTHOUSE. Willem Dafoe is the senior lighthouse keeper. He has one leg, a growl of a voice and he's flatulent. He's like a farting Captain Ahab. 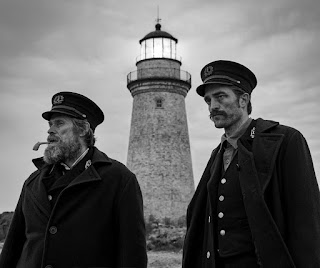 Robert Pattison plays the new guy, a replacement who has to endure this dreary job, the older guy's stories and his constant gas-passing which never, ever ends with "Ooops" or "Excuse me." They are together, isolated, surrounded by sea and under grey skies for weeks. The younger guy is so isolated, so deprived of a romantic release, that he masturbates to the image of a mermaid. And this is no comic scene of self-gratification like you might see in a Seth Rogen movie. It's serious. The young worker beats his johnson like it owed him money. And then there's the seagull. Thomas (Willem Dafoe) warns Ephraim to never harm seagulls because he believes the birds carry the souls of dead sailors. 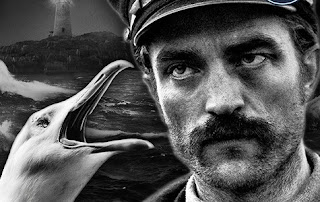 The light itself is symbolic. Ephraim burns with a desire to look into the light of the lighthouse. He does. What does he see? That's not important. We don't see what he sees. It's like looking in the box in KISS ME DEADLY (1955) or the briefcase in PULP FICTION. Or, for those of us who grew up with Bible mythology in Catholic school, it's like what Lot's wife saw. We don't know exactly what she saw, but we know the sight of it -- after she was warned not to look -- turned her into a pillar of salt. Ephraim's reaction shows us he should not have dared look into the light. To use another piece of Bible mythology, he's like Eve biting the apple when she was told not to in the Garden of Eden. 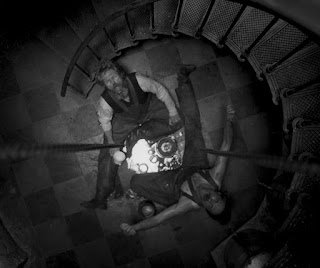 Tensions rise like the sea water between the two isolated men. They rise before and after they dance. I'm no film scholar but what hit me is that Eggers may also be commenting on the personal mythology we men create to protect ourselves, to make ourselves feel special and to co-exist with other. That masculine mythology can protect us. It can lead to despair and violence. I love the boldness of black and white cinematography. THE LIGHTHOUSE fascinated me visually. It did remind me of those symbolic 1960s theo-philosophical Ingmar Bergman classics such as THE SEVENTH SEAL and THE VIRGIN SPRING. It also echoes the Stanley Cortez cinematography for THE NIGHT OF THE HUNTER (1955). The way Jarin Blaschke shoots the spiral staircase in the lighthouse will make you think of the bell tower scenes in Hitchcock's VERTIGO and Robert Siodmak's THE SPIRAL STAIRCASE (1946). You may not totally understand THE LIGHTHOUSE at first viewing, but you'll be gripped by the powerful acting and the filmmaker's originality.

I started my professional broadcast career in radio in Milwaukee after I graduated from Marquette University. During my Milwaukee years, I saw a Wisconsin actor onstage in productions at an avant-garde Milwaukee theatre company. We frequently mentioned the company's productions on our FM rock radio station. This was the mid 1970s and that tall, lanky Wisconsin actor always stood out onstage. He had the gift. It was Willem Dafoe. I have followed his career ardently since then. I've seen his movies. I've seen him onstage in New York City. Dafoe delivers a peak performance in THE LIGHTHOUSE. 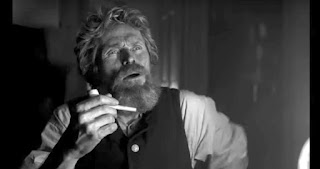 By the way, if I was the owner/manager of an independent movie theater, I would put THE LIGHTHOUSE on a double bill with Hitchcock's THE BIRDS. Thanks for your time.
at March 24, 2020