A Taste of BREAKFAST AT TIFFANY'S

Those little neighborhood diners and cafes where you go and really relax. You could sit back as if you had just lowered yourself into a warm, soothing bath. I loved places like that in New York City. I loved chatting with the waiters and waitresses -- those ordinary working class people who would often say things that made you realize these ordinary working class people had outlooks and observations that moved you with their extraordinary wit and wisdom. For me, one such place in the late 80s was The Penguin Café in the West Village on Hudson Street. Unpretentious, great burgers, a great staff. One late afternoon, I was having a cheeseburger deluxe and talking old movies with Mike the waiter. The café wasn't busy at that hour. The manager favored movie soundtracks on the CD player. In the background, the theme to BREAKFAST AT TIFFANY'S was playing on the movie's soundtrack. Mike mentioned how much he loved watching Audrey Hepburn on TV as Holly Golightly when he was a kid. He said, "It was a fun movie to me. And I loved that she named her cat 'Cat.' That was so kooky. She was so lovely." 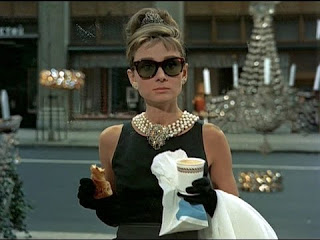 I agreed. I knew what he meant. I responded to it in the same way when I was a kid and it aired on TV. Holly's stylish hair and outfits, her cigarette holder, her crazy party guests and the bouncy Henry Mancini score made it groovy entertainment. Mike added, "Then you grow up and realize all the darkness in that Technicolor. When she got 50 dollars for the ladies' room, it wasn't 50 dollars for the ladies' room. She was getting money for sexual favors so she could get by." 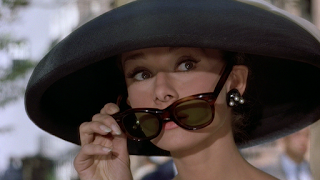 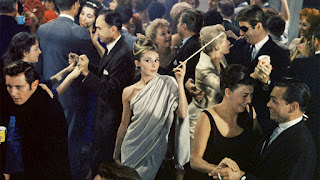 Underneath that hip Manhattan elegance was desperation, fear and loneliness. Holly Golightly went to New York City to transform herself, be new, beat back some shadows of pain and lack from her past. Millions of others migrated to Manhattan to do the same thing. I certainly did. I was a new 7th grader at Mother of Sorrows Catholic school in Los Angeles. I still recall the names of the three kids at recess who made up their own little game on the schoolyard. Alphonso came up with the game and said that "the loser has to touch Robert Rivers." I was standing alone and away from them, but still within earshot. Linda was the loser. She walked over to me and, as soon as her finger touched my shoulder, Alphonso and Philip broke up laughing because she touched Robert Rivers.

Is it any wonder I was driven to transform myself from shy Catholic school bookworm, a new kid that no one wanted to touch, to a guy who was rubbing elbows with major movie stars on his own national talk show in New York City? I had compassion for Holly. So did BREAKFAST AT TIFFANY'S director Blake Edwards, screenwriter George Axelrod and star Audrey Hepburn. The opening credits scene alone of the 1961 movie is more memorable than a few feature length films I've paid to see in the last five years. It's daybreak, probably on a Sunday morning, in New York City. Fifth Avenue is free of traffic. It's quiet. A gorgeously gowned Holly Golightly emerges from a taxicab with a take-out order coffee and a pastry. That's her breakfast as she stands looking at diamonds in a window at Tiffany's. "Moon River," a wistful tune later to be sung by Holly, is the background music. With such an ultra-chic Manhattan visual, the harmonica solo in the music calls us the rural reality of Holly's past. Visually, she seems to have made a dream come true. Fabulous clothes. A swell cosmopolitan life. But there's a sense of longing in the composition.

Hepburn physically and movie image-wise was not the Holly Golightly of Truman Capote's novella. His muse was Marilyn Monroe. Had the film adaptation adhered closely to Capote's work, Tuesday Weld would've been a great choice to play Holly. In the under-appreciated 2006 drama, INFAMOUS, Toby Jones plays Truman Capote and Daniel Craig plays one of the convicted Kansas killers Capote interviews for his masterpiece, IN COLD BLOOD. In a letter from prison, the convict remarked that he read BREAKFAST AT TIFFANY'S. However, he didn't feel that Capote had true compassion for Holly. He was, to a degree, laughing at her. He wasn't totally kind. I read the novella and I agreed with Daniel Craig's character. Blake Edwards, George Axelrod and Audrey Hepburn were kind in their interpretation of the story. Hepburn was kind -- and brave. She took a risk with her successful and Oscar-winning image. She was perfectly cast as the runaway princess who delightfully learns about the joys of ordinary life. Outside of the castle, she finds romance and finds her true, independent voice as a royal who now has a personal connection to the people. This was in William Wyler's ROMAN HOLIDAY co-starring Gregory Peck. The 1953 film brought the new star an Oscar for Best Actress. In films to follow, Audrey Hepburn would again play the intelligent young woman attracted to the older, mature man. As the Greenwich Village bookstore clerk who majored in philosophy, she's Jo Stockton in the musical comedy, FUNNY FACE. Fred Astaire stars as a Richard Avedon-ish fashion photographer who sees what Jo doesn't see -- that she's got the right stuff to be a new model. He feels she'd be a breath of fresh air with her "character, spirit and intelligence." Those three qualities were hallmarks of a Hepburn character. The men her age come off as unimaginative, juvenile and responding to her looks more than her "character, spirit and intelligence." We saw Audrey Hepburn opposite Fred Astaire (FUNNY FACE), Humphrey Bogart (SABRINA), Gary Cooper (LOVE IN THE AFTERNOON), Cary Grant (CHARADE) and Rex Harrison (MY FAIR LADY). In each one, she's attracted to the older man even while a younger one pursues her.

Blake Edwards' BREAKFAST AT TIFFANY'S presented the chance to depart from the Audrey Hepburn film template. In this production, the older man could lead her to a life of heartbreak. There's Doc, played by Buddy Ebsen. Doc knew Holly before she fled to New York and reinvented herself. He wants her to return to her rural origins. There's José, the handsome and mature South American visitor. He has money and position. He'd want Holly solely for amusement. She gives off the hipster attitude that she'd be cool with that because she's a free spirit who just wants money and fun. She plans to fly overseas to hook up with José. The young man who is Holly's neighbor is just like Holly. Paul Varjak, played by George Peppard, is a struggling new writer who's being kept by a well-to-do middle-aged married woman. Paul Varjak gets money for sexual favors so he can get by. He puts an end to that when he falls in love with Holly. This time, the qualities of the Audrey Hepburn character would be noticed and fully appreciated by a man her age. The actress flipped the script on her screen image. 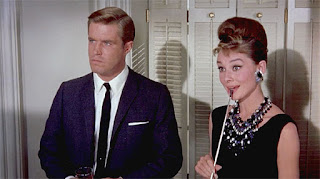 At the end, the happy end, Holly Golightly comes to a self-realization. She finds true love and fulfillment, an end to the emptiness of her life. When this happens, she's not dressed in designer clothing and accessories in the morning light at a classy midtown Manhattan location like in the film's opening scene. She's rain-soaked in an alley near trashcans. But in that setting, in that moment, she's found something beautiful. She's been transformed on the inside.

Audrey Hepburn received another Best Actress Oscar nomination thanks to this performance. I love BREAKFAST AT TIFFANY'S. I came to love it even more thanks to a waiter in the West Village who served me a cheeseburger deluxe.
at March 08, 2020