This morning, my spirit sought relief. I've been watching hours and hours of live MSNBC coverage. My spirit craved entertainment, something upbeat that would have restorative powers. Something with a swing beat from the classic Hollywood era. My spirit needed to recharge with a few minutes featuring Martha Raye. 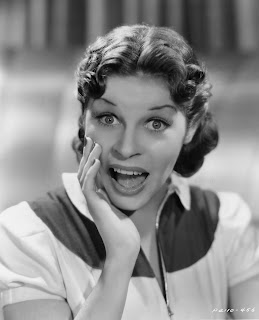 When I was a little boy in Los Angeles, I was watching cartoons one morning. Cartoons of the 1930s and 40s would occasionally do send-ups of movie stars such as Humphrey Bogart, Katharine Hepburn, the Marx Brothers and Mae West. I saw one animated female character whose big mouth was over-emphasized.  I didn't know who she was. Our mother was practically a walking library of pop culture from that era. Mom was in the living room with me as I watched TV. She said, "That's Martha Raye." With bright eyes and a smile, Mom added, "She was known for ... truckin'!" Not only did Mom tell me that "Truckin'" was a popular dance step in the 1930s, when she was girl, she got up and did her imitation of Martha Raye doing that dance step. This was a magic moment in the living room because my mom was just as entertaining as the cartoon on TV. She ended her dance demonstration by saying "Martha Raye could truck like us Black folks." Fortunately for me, it would not be the only time I'd experience such a moment thanks to Mom. She was a fabulous mimic of famous entertainers. 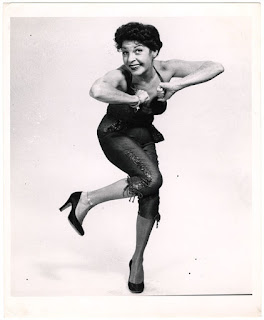 Mom loved Martha Raye. I learned more about Martha a few years later on a Sunday afternoon. Jazz artist and jazz journalist, Leonard Feature, hosted a Sunday afternoon live jazz music/interview show on local L.A. radio. Mom and Dad listened to his show every Sunday afternoon they could. On one broadcast, Feather's guests were Sarah Vaughan and Carmen McRae. He asked the two terrific vocalists and friends to name some of their favorite vocalists. Sarah said, "I'm going say a name and folks may laugh but Carmen will know I'm serious -- Martha Raye." Carmen agreed. I giggled. By then, I knew Martha Raye mainly as the funny lady on network TV shows. 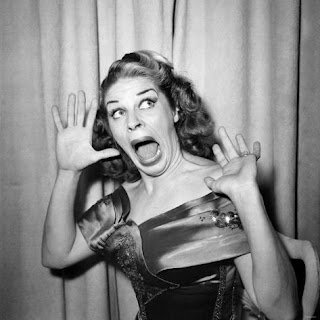 Mom sweetly commented, "Don't laugh. Martha Raye was a good singer. I wore out my record of her singing "That Old Black Magic" and had to by a new one when I was girl." I would come to fully understand why Mom wore out that record when I heard Martha Raye's 1930s recording of "Stairway to the Stars."  Oooh, baby. Give it a listen.

Although I grew up in Los Angeles with parents who were avid moviegoers who took us to the drive-in to see Hollywood and foreign films, even though I made my first TV appearance on a syndicated classic film trivia game show shot in Hollywood when I was in high school, I had more up close and personal contacts with stars during my Milwaukee years after I graduated from Marquette University. That's where I started my professional broadcast career. Initially, I was "Bob Rivers," the new part-time reporter and news reader on WQFM rock radio. This was in the 1970s. One of my early assignments was to attend the press conference preceding the week-long engagement of the "4 GIRLS 4" revue. Rosemary Clooney, Rose Marie, Helen O'Connell and Margaret Whiting were the four veteran singers. My cool boss had me attend the press conference and get soundbites from Rose Marie because our audience would love her from THE DICK VAN DYKE SHOW and THE HOLLYWOOD SQUARES.

That press conference (with a buffet) marked a turning point in my early career. Rose Marie took an interest in me and became a mentor. Her advice took my radio career to a higher level. The "4 GIRLS 4" show was such a hit in Milwaukee that it made a return engagement the following year. I got a letter from Rose Marie saying that she'd moved on and would not be in the tour for the return engagement. But, she wanted me to get in touch with Rosemary Clooney while she was back in town. I did. I was with a buddy. Gino Salomone has since gone on to become a most popular Milwaukee TV & radio talent. He was present for a dinner full of good ribs and lots of laughs with Rosemary Clooney, Margaret Whiting -- and Martha Raye. Raye had us in stitches with her stories about her years under contract to Paramount Pictures. Especially memorable were her stories about actor Fredric March who, according to her, was well-endowed with more than just acting talent. And he had a healthy set of hormones that motivated him to flirt a lot.

Martha remarked, "Honey, if Fred saw a crack in the wall, he'd go after it."

The other two ladies decided to call it a night after dinner and head back to their hotel. Martha turned to me said, "Hey, kid. Let's get a nightcap." Martha, Gino and I went to the new Hyatt Hotel in Milwaukee and had a nightcap. Make that "nightcaps." That little woman could knock back some vodka. She was flattered when I told her my mother bought her records and loved her work. 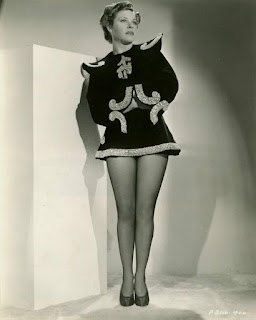 Come the end of the 1930s, Paramount dropped Martha Raye after featuring her in several musical comedies opposite such leading men as Bob Hope and Bing Crosby. For the 1940s, the kind of brassy and bouncy musical comedy roles that Raye did throughout the 1930s now went to newcomer Betty Hutton. She made movies at other studios and she cut records. My mom's favorite Martha Raye record was Martha's spin on "That Old Black Magic," the 1942 song written by Harold Arlen (music) and Johnny Mercer (lyrics). Like mother, like son. It's my favorite Martha Raye record too. Here it is.

I went to New Orleans for Jazz Fest in 1990. While there, a friend and I met up with Harry Connick, Jr. Harry, one of the coolest gents you could ever hope to meet, showed us around and we chatted about music. Harry and I were chatting about the classic jazz vocalists. I mentioned Martha Raye and he, just as I had done when I was an adolescent, giggled. I did what Mom did. I told him she was a solid jazz vocalist who was held in high regard by Sarah Vaughan and Carmen McRae. Here's another example of Martha Raye swingin' during her Paramount years. She's in a jam session with Bing Crosby and singer/pianist Frances Faye. The song is "After You" from 1937's DOUBLE OR NOTHING.

Martha Raye. What an entertainer she was. She gave me one of the most memorable nights I ever had in Milwaukee. She was wonderful company.  I hope her music lifted your spirits for a few minutes.