Ryan Murphy certainly has received lots of attention on Twitter for his new Netflix mini-series. He takes us to Hollywood in the late 1940s and gives us a look at how big screen images from the West Coast dream factory known as Hollywood could have been different if gay and bisexual had not been forced to live the sexual area of their lives in the shadows and if people of color had received equal opportunities. Last night, I watched the first episode of Ryan Murphy's HOLLYWOOD. As it's a Ryan Murphy creation, I feel that I must watch it or else my Gay Card will be revoked. I loved the first episode. It hit me like a tall, tasty glass of lemonade -- with a shot of Grey Goose vodka in it. There was good acting. Some snappy writing. The production design dazzled me. The person or persons who did the wardrobes must have hit every single vintage shop in the Hollywood area. The costumes were on point. Visually, the color palette in the art design is rich, vibrant and accurate. For me, the soundtrack was from Heaven. Vocals by Perry Como and Peggy Lee. Artie Shaw's "Begin the Beguine." The retro music selections made me wish stores like Tower Records were still aplenty so I could've purchased a CD of the HOLLYWOOD soundtrack and a portable CD player so I could hear it over and over again. The first episode whets your appetite for future installments that could delve into the politics of sex and race in Old Hollywood in order to make a comment on the industry today. 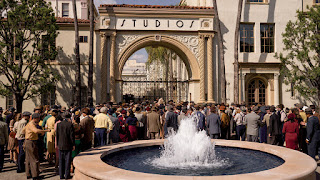 If you were of my generation, a classic Hollywood film enthusiast and you were a gay youth, there are certain things that were familiar to you.  You read Kenneth Anger's Hollywood Babylon, you knew that Bette Davis and Joan Crawford could not stand each other. You learned that high profile actors who were not openly gay did some of their best work opposite Elizabeth Taylor. The two actors were Rock Hudson and Montgomery Clift. You knew that Oscar winner Hattie McDaniel was the first Black person nominated for an Oscar and that Dorothy Dandridge was the first Black woman ever to nab an Oscar nomination for Best Actress. And you read that Scotty Bowers was a handsome Marine who served in World War 2 and, after he served, became a gentleman pimp in Hollywood. He arranged discreet same-sex hook-ups out of a gas station. His clients were Hollywood stars. My generation isn't the only one that knew those items. Murphy's did too. In fact, you'd have been taught them in a university course called "Gay 101." If you'd never heard of Scotty Bowers and you saw the first episode of HOLLYWOOD, you might have just said "Wow. That kind o' thing really happened?" Bowers died last year, well into his 90s. According to his 2012 memoirs, Full Service, he was an attendant at a gas station on the corner of Hollywood Blvd and Van Ness after the war. Actor Walter Pidgeon drove in, took a gander at Bowers and wanted the gas station attendant to do more than just fill 'er up and check his oil. They went back to Pidgeon's place for a lovely afternoon that included nude swimming. Enterprising Bowers, by his account, hit on the idea of helping handsome down-and-out buddies make some cash by entertaining closeted show biz types. The matchmaking office would be the gas station. When the Bowers book came out, some folks slapped it down because the names mentioned in it were mostly deceased stars who could not confirm or deny their association. Some of the stars named were Spencer Tracy, Leon Ames, Cole Porter, George Cukor, Cary Grant, Randolph Scott and Rock Hudson. I myself was critical of the book and Bowers. Then I saw him in a 2017 documentary and my attitude softened. What softened it was hearing that Bowers acted like an agent. If he took anything at all for his matchmaking, it was no more than 10%. The Bowers-like character in first episode of HOLLYWOOD sends the hunky attendants out on drive-away sexual assignments, clients pay him and he splits the take with the hired boy-toy 50-50. Another thing, Bowers kept in touch with some of his former employees through the decades. When they were well into their AARP years, he checked to make sure they weren't broke and lonely. His occupation may have been socially unsavory, but Scotty Bowers' heart was in the right place. 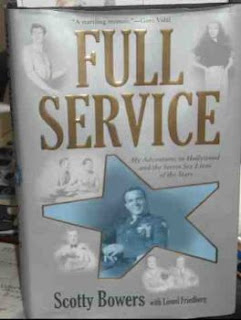 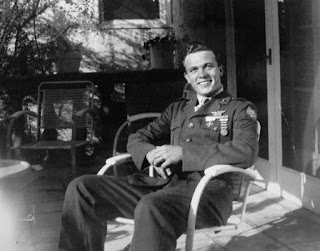 In a Ryan Murphy creation, one that takes us back to glory days of Hollywood, his revised history can recreate the tone of an era yet some details lack accuracy. In his mini-series about the Joan Crawford v. Bette Davis feud during the making of WHAT EVER HAPPENED TO BABY JANE?, he had Crawford (Jessica Lange) up at the crack of dawn to hear the Oscar nominations. In the 1960s, and for a couple of decades to come, the Oscars were held in April and the nominations were announced in mid-afternoon. In HOLLYWOOD, the first episode, we meet handsome Jack Castello (David Corenswet), back from WW2, married and longing to be a movie star. He's in a group of eager, starving actors waiting outside the gate of a top Hollywood studio in hopes of being picked for a day of employment as "background actors." In those days -- and even when I got my Screen Actors Guild card in 1988 -- they were still called "extras." "Background actors" is the modern-day term. Jack waits at the Hollywood studio gate with his nebbish-y buddy who tells him that Billy Wilder is lensing a new Bing Crosby musical co-starring Joan Fontaine. Wilder's movie was the 1948 Paramount release, THE EMPEROR WALTZ. The soundtrack vocal that plays over this scene as the casting director approaches the gate to select background actors is Perry Como singing "Catch a Falling Star." That hit Como record came out in 1957. 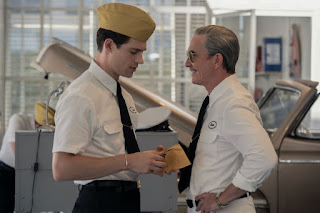 Jack's wife is a waitress. She's working. He's not and he can't get a bank loan. Dejected, he goes to bar for a drink. While drowning his sorrows, a nattily attired and macho middle-aged character buys him a drink. Ernie is a larger than life Hollywood survivor who's a member of the Forrest Tucker club. He's well-endowed and proud of it. Dylan McDermott is a hoot in this role, knocking out one of the most energetic performances I've ever seen him give. Yes, the same Dylan McDermott who played Shelby's husband in STEEL MAGNOLIAS. Ernie breaks down the facts of Hollywood life to Jack and coaxes Jack to join his "special service" gas station team. Jack's first assignment is a wealthy Hollywood wife. She was a silent screen star but, when sound came in, Hollywood execs felt she came off too "Jewish." In a Beverly Hills hotel room, she tells Jack that her financially thriving but sexless marriage is a reason why "I'm paying for company." Patti LuPone is expectedly delicious in this role. She's given some Broadway-esque dialogue to say that sounds like a lead-in to a musical anthem of self-survival like Stephen Sondheim's "I'm Still Here." She gives us a glimpse of heartbreak and loneliness behind the eyes of her lusty character. Before the ex-silent screen star and the Hollywood hopeful go horizontal, she says to him "Make me feel like I matter." 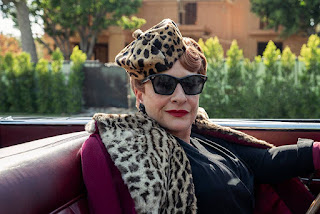 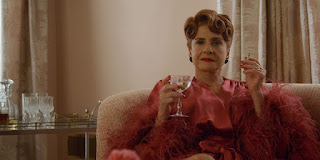 Jack chickens out when he encounters his first male client -- songwriter Cole Porter. (This would've been a perfect place for the soundtrack to play either "Love For Sale" or Ethel Merman's recording of "You're the Top," both Cole Porter hits.) Again, Ernie has to hip him to the facts of Hollywood life. As many were in those days, Ernie is a smoker. Occasionally, he coughs. In a production like this, you sense that such a cough will be the cough of doom. 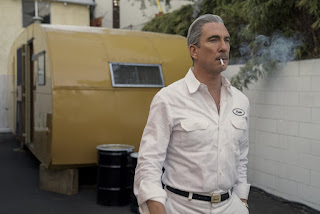 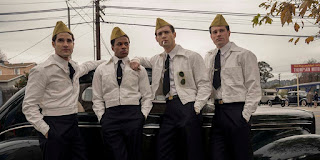 Jack, who has yet to show us that he's got the stuff to be a movie star, decides to take a walk on the wild side. This means going to costume shop, getting a policeman's uniform and going to a gay male porno movie theater where he poses as a cop. He locks eyes with a handsome young Black man there and pretends to bust him. The young Black man thinks he's being taken to a police station. Jack takes his to Schwab's drugstore. In a way, it really doesn't make sense but it sets us up to learn that the African American Archie, well-played by charismatic Broadway actor Jeremy Pope, is an aspiring screenwriter. Jack brings Archie to Ernie. Ernie digs Archie and makes him a new member of the full service team. Archie hooks up with a shy guy named Roy Fitzgerald. Roy will later become famous as Rock Hudson.

I'm really keen on seeing if Ryan Murphy sticks with his "Gay 101" knowledge of Old Hollywood or if he digs deeper to reference facts not commonly known. Facts about the politics of sex and race within the old Hollywood studio system. In her youth, my aunt took piano lesson in Los Angeles from the mother of the famous Nicholas Brothers. A few months ago, my aunt and I chatted about that. She said that Mrs. Nicholas commented on her extraordinarily talented sons. "They could do a great dance number for a 20th Century Fox movie," Mrs. Nicholas said, "but they couldn't eat in the studio commissary." Here's a clip of the Nicholas Brothers in the 1943 Fox musical, STORMY WEATHER. This number received high praise from screen legend, Fred Astaire.

But they couldn't eat in the studio commissary.

Ryan Murphy's HOLLYWOOD is on Netflix.